A SPECTACULARLY BAD WEEK FOR MINNIS 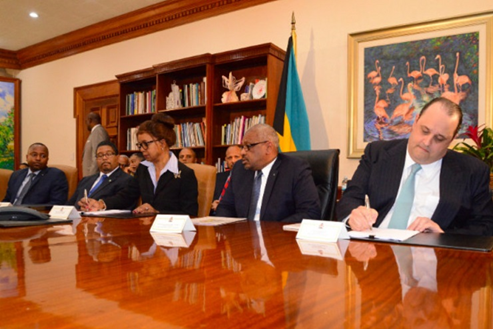 (Cavorting With Crooks To Get A Deal In Freeport)

On 19 February, the man dubbed the dumbest Prime Minister the country has ever had sat in on what was supposed to have been a signing ceremony for a 5.5 billion dollar deal between the Government of The Bahamas and a company that was newly minted with no track record on oil called Oban Energy.  There was a man named Peter Krieger who represented himself to be the President and representative of the company and he was there next to the Prime Minister and the Secretary to the Cabinet and an array of other ministers penning this deal.

The question was immediately: what was this deal?  Who were its principles?  Peter Krieger people asked: “is he the same fellow from West Palm Beach that had been convicted of fraud and had been sanctioned by the Securities and Exchange Commission in the United States.”  The judgements started surfacing and were circulated on line.

When the Prime Minister was questioned about this, his answer was that the PLP had approved the deal and so he did not know why the PLP was making noise about it.  It didn’t go quite that way.  The PLP issued a letter in 2016 in which the company had to fulfil certain conditions.  In the months since that letter, the company was unable to do so and so the PLP did not proceed to a Heads of Agreement. This crew proceeded to a Heads of Agreement without any of that and had the cart before the horse.

The Prime Minister when pressed said that he would lay the agreement on the table so the country could see what the agreement said.  He did that in the House of Assembly on 28 February. Only there were more questions than answers. Certainly, the Prime Minister has not answered the question aside from blaming the PLP on how if he knew all the fraud allegations against Peter Krieger who later described himself not as President but as  an Ambassador for the company, could have passed the due diligence test.  The other question was how could you agree to the deal when the Environmental Impact Assessment had not been completed and the funding was not evident?  In fact, it seemed that this company needed the approval to go shop the product around and find money.

It gets worse. When he tabled the document in Parliament it turned out that there was someone named Satpal Dhunna who had his signature on the document as President, not Mr. Krieger who signed on television.  No explanation was given in the House as to why Mr. Krieger who appeared to be signing the document on TV was not the signatory on the document presented to the House. So question again: was this the right document?  Were there two documents?  If so what document should the public rely on?

The week was really bad for Prime Minister Minnis. He was found to be cavorting with a known crook. He, Mister Anti-corruption, had been caught with his pants down.  He seemed a ball of confusion on so many fronts.  Even the Minnis friendly National Review in The Nassau Guardian trashed his performance in government.  Then of all persons Eileen Carron, the Publisher of The Tribune, told him to get out of the Oban deal because he had not done his due diligence and from what they could see this was not a good deal. They even suggested that he could lie on the PLP and tell the country, the PLP did not give all the facts so he made a mistake.

That does not move Dr. Minnis. He will double down. But as he moves about the country with sirens blaring, ten months into his administration, he most know in his heart of hearts that the popularity of the regime has plummeted and  that people think he is hopelessly incompetent and just does not have one idea what he is doing.

In the House he was touting financial legislation that he said would stop corruption and started talking about the PLP and corruption, This Oban deal is as crooked as the day is long.  So physician heal thyself!