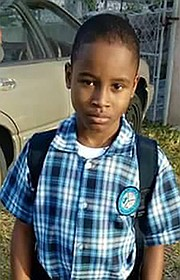 Eight year old Eugene Woodside was the 105th person murdered in The Bahamas for the year.  He was sitting doing his homework at home when a fusillade of bullets peppered his home.  He ended up dead.  His final words to his 29 year old mom on that day was “I love you too mummy”.  Another sad story. That was on Monday 25th September.

There was a video taken of the high profile visit of the Prime Minister Hubert Minnis with his whole entourage including his wife to the home of the boy’s mother.  The usual platitudes about the sorrow and the mother’s pain, but no tears.

It is difficult to be sympathetic to Dr. Minnis who has proven to be a big political faker.  The FNM party having won its campaign for the election on deceptions and lies, and having just put on a crying performance in the House of Assembly on Wednesday 27 September, who can feel any pity or empathy for him. His government and his party are simply just not fit to govern.

The Bahamian public though, not right, in their hostility toward the outreach that the Government announced for our CARICOM state of Dominica, was exercised about it and even one of his own backbenchers launched a tirade against him for helping others, crying for others in the House and not crying for and caring for the Bahamian people.

Well if Dr. Minnis had consulted the PLP or had simply remembered his history they would have known about the hostility which the Bahamian people have toward people from the Caribbean, even though they depend on people from the Caribbean to survive as a nation.  For example if all the Guyanese left The Bahamas, the teaching of our school children would be in trouble.  But never mind that small detail.  The cry from the Bahamian is that we don’t want them here in response to Dr Minnis who announced the following:

Dominicans who apply to the University of The Bahamas and are accepted will be allowed immigration permission to come in.

Dominicans who are working with banks that have branches in The Bahamas and the banks want to transfer them here temporarily will be allowed in.

There is nothing that will break the Bank.

The PLP’s spokesman on Foreign Affairs Fred Mitchell said: “The devil is in the details”

We say that Dr. Minnis and his party were responsible for whipping up anti CARICOM hysteria when they were in Opposition.  So when you sow the wind, your reap the whirl wind.

The pushback could not have happened to a finer bunch.  So the PLP should let them stew in their own fat.

No boo hoo, and crocodile tears from us to support Dr Minnis.