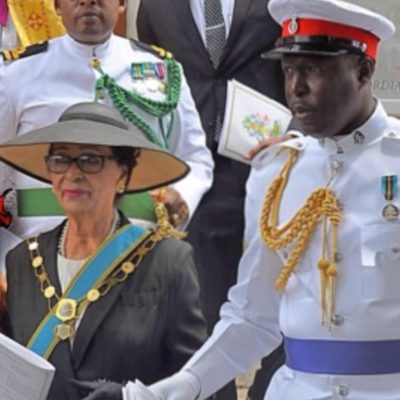 You used to see him at the side of the Governor General Dame Marguerite Pindling over and over again.  He was at the side.  He was at her back.  He was her front man. Carlis Blatch, tall black and handsome, an officer and a gentleman, the kind of man the girls would like to take home to mother.  The kind of son that a mother or father would want.  He was the Governor’s aide de camp and protocol officer.  He made many things at Government House run smoothly.  He was there for fourteen years doing just that with the Governor General. Now no more. He is dead.

Inspector Carlis Blatch was picking up his son the reports say from the H. O. Nash Junior High School at 3 pm on 12 September, when he was set upon by some men who asked him out of the car in an apparent robbery and then shot him point blank in the head.  They made off with his girlfriend’s car.  They left him in front of his daughter who was in the car and sent the children at H O Nash scrambling for their lives and for him to die like a dog on the pavement in the parking lot.

The animals that killed him rushed away saying: “Fuck the police”.

The PLP issued a statement about the killing and said in part this: “No statistical chart can provide any level of satisfaction on the state of law and order.”

This should be a message for the FNM who came to power claiming that they had all the answers to this stuff. Blaming the PLP for the crime problem. Now they are in the driver’s seat and their record is no better.  All these boasts about crime being down, murder being down are idle boasts.

So now on their watch, a police officer who was the aide to the Governor General is dead. Murdered in cold blood in front of his daughter. What the hell can the FNM say about it. They have failed us. Would they agree. If this were the PLP, they would all be slamming and damning.

There is no good reason this man is dead.  None. We are almost like Job’s wife who told her husband in the midst of his troubles: curse God and die.

In the meantime, let’s hang onto what we have left.

Let’s work to get rid of this useless and lying deceitful government.  Let’s pray for the children of this officer who are now without a father.  Two ex wives, and a girlfriend have a back up that has now gone from the scene.

What will we all do.