Leader Of The Opposition Says Farewell To Sir Arlington Butler 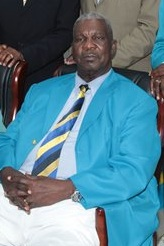 Statement by the Leader of the Opposition
The Hon. Philip Brave Davis MP QC
On The Passing Of Sir Arlington Butler

It was with sadness that I learned of the passing of my friend and former Parliamentarian, Speaker of The House, Cabinet Minister, Diplomat and Sporting Giant, Sir Arlington G. Butler.

Sir Arlington was an ardent proponent of and participant in this country’s progressive movement that ushered in Majority Rule, Independence and the modern Bahamas. We thank him for his national service.

A gallant and courageous political warrior with the battle scares as proof, Sir Arlie as he was affectionately called by friend and foe alike, always stood for what was right, accepting the consequences of his stance with dignity and grace like any good soldier. In all his battles, trials and tribulation, Sir Arlie never wavered in his commitment to advancing the common good.

The PLP salutes his lifelong contribution to our country’s national development, particularly in the areas of education, diplomacy, youth and sports development. Sir Arlington’s long and distinguished service as the President of the Bahamas Olympic Committee has significantly impacted The Bahamas’ envied position on the international stage as a sports power. With his passing, an important era in sports development has come to an end. He will be sorely missed.

I personally appreciated his knowledge and wisdom through our many conversations over the National Development of the country he loved so deeply. He was a true son of the soil with a deep and abiding concern for the welfare of the Bahamian people.

On behalf of the Progressive Liberal Party, my wife Ann Marie and on my own behalf, I offer deepest condolences to the Butler family and join the people of The Bahamas in mourning the loss of this giant of a man; this extraordinary Bahamian Sir Arlington Butler.