MCALPINE AND THE FNM REBELS: WHAT’S THE FUTURE HOLD?

We show you what Frederick McAlpine had to say to the Nassau Guardian during the week about joining the PLP.  Mr. McAlpine was responding to a headline in the paper which said erroneously that the PLP’s Leader Philip Davis had said to a gathering in Freeport that the dissident FNM MPs should come back home.  Mr. Davis gave a general invitation to all former PLPs to come back home.  Mr. McAlpine said to the press thanks but no thanks.  The hapless and hopeless Chair of the FNM Carl Culmer says that he wants to go to Freeport to reach out to Mr. McAlpine.  Let’s give our analysis.  The four MPs are at a dead-end if they do not bend and conform with either the FNM or the PLP.  The PLP is more problematic because right now the PLP in its present equilibrium does not need for the Force to be disturbed by newcomers who the party has no idea what baggage they bring.  Even the normally clueless Nassau Guardian was able to discern that in their editorial last week when they encouraged the PLP not to accept them or rather asked them to stay where they were.  We think the Guardian is right.  There will be time enough for joining when the counting comes.

McAlpine: Thanks for the offer, but I’m still an FNM 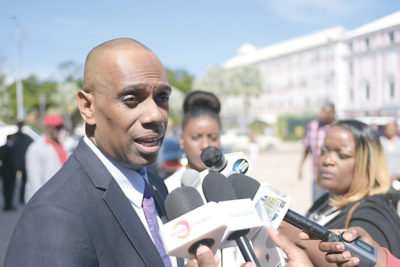 While Pineridge MP Frederick McAlpine said yesterday he has no intention of leaving the Free National Movement (FNM), he said “it’s good to know” he has options.

“There are options available to me,” McAlpine said.

“I’m not specifying as to what that option is or what it could be. I’ve not decided on anything one way or another. I’m still an FNM.”

He added: “I’m committed to the Free National Movement at this time but it’s good to know there’s options available to me.”

His comments come considering Progressive Liberal Party (PLP) Leader Philip Brave Davis saying that the time had come for former PLPs to return to the party.

On Saturday, Davis said, “I have some PLPs who are MPs who are MPs as FNMs now. Now they want to come back home. So, let me say all is forgiven. We are not here to hold any grudge for what you may have done.”

McAlpine and Minister of Transport and Local Government Renward Wells are former members of the PLP.

When contacted yesterday about Davis’ comments, Wells laughed and declined to comment.

The Pineridge MP insisted he had “no intention at this time in crossing the floor” and he also commended Davis for “extending an olive branch” to former party members.

“I think it’s commendable of the leader of the opposition to be reaching out to former members of the Progressive Liberal Party whoever they may be, but only time will determine whether or not that offer will be received by any person former or otherwise,” he said.

“Based on what the leader of the opposition is saying, I do not see it being limited to just to members of Parliament, but I guess what he’s saying is he’s calling all persons who are former PLPs to come home.

“That is what a leader ought to do but at the same time the leader has also made it clear that the PLP must get its house in order so that it can become attractive to those who were once so.”

In recent weeks, McAlpine has come under criticism from members of his party for his critical stance on government policy.

In October, Maurice Moore, one of the founding fathers of the FNM, said it was nonsensical for McAlpine to ride the party’s coattails while continuously criticizing the government.

But, yesterday, McAlpine questioned the criticism he has received from members of the FNM.

“… I’m just an FNM saying to the party, ‘Listen, this is what the people are saying,’” he said.

“You cannot beat me up for telling you what the people are saying, and then expect the people to support you when you’re beating up the fella for only delivering the message they gave.”

In June McAlpine was one of four sitting FNM MPs, known as the Rebel Four, to oppose the government’s decision to increase value-added-tax to 12 percent.

In October, he and other members of the Rebel Four were openly critical of a resolution to the move the General Post Office to Town Centre Mall.

Immigration Minister Brent Symonette is one of the major owners of the mall.