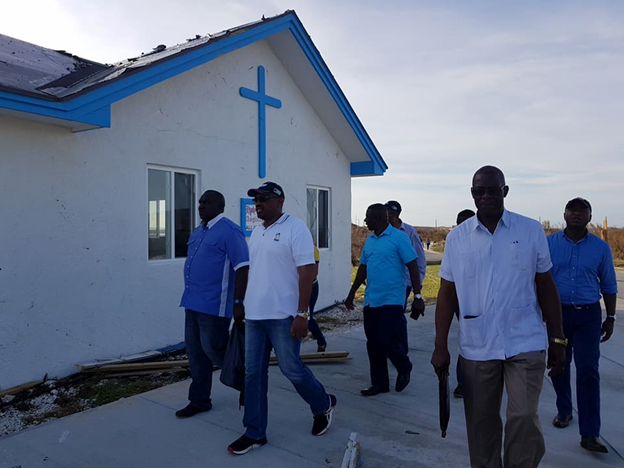 The hotel in Grand Bahama was empty.  The buffet looked sad. The trees were torn to shreds and looked like someone had gone through with a blow torch. The waiter said the buffet was so reduced because they had only four guests in the hotel since the hurricane. On 15 September when American Airlines landed, they had stopped using the Embrarer 175 and had shrunk down to the 145.  The plane was basically empty. The only passengers were the workers coming to take jobs from Bahamians at the Grand Bahama Shipyard

Meanwhile the Prime Minister of Touring Hubert Minnis was on the run from here to there and everywhere.  The hurricane sure was a godsend to Dr Minnis. He doesn’t have to explain anything on crime, the economy and not even the foolish decision to pay 2.6 million dollars for insurance only to get $234,000 back.

The Prime Minister and his Cabinet are all on the same plane as they go island hopping from one place to the next looking at people in their homes.  There is one particular picture that showed the stark desolation and hopelessness and that was the Minister of Education who was standing in Ragged Island in the middle of a school destroyed by the hurricane.  You would have thought that in a small area like Ragged Island, the minister would have come with the tractors and the builders and set about rebuilding the school. What in God’s name is it that he has to look at, to know that the place is destroyed?

Ragged Island is perhaps the most devastated community of The Bahamas from Hurricane Irma.  Next to that is Bimini and then in varying degrees Salina Point in Acklins and then the tornado scored Grand Bahama.  It has left the country relieved in a sense but war weary.

It has caused various officials to say some unfortunate things in the midst of these storms.  There is another storm right behind it, now hovering over the Antilles and headed it appears to The Bahamas.

The Prime Minister led the way with the unfortunate comments when he said that he thought that the people of Ragged Island should move. He expressed the view that maybe it was not worth rebuilding.  The next to pile on was the Executive Director of the Chamber of Commerce Edison Sumner who said that these little communities on the islands made life too expensive to rebuild the infrastructure after each storm.  He opined that maybe we should move them all to one settlement.

You can forgive the Director of the Chamber for his faux pas but not the Prime Minister.  Elliott Lockhart Q C who hails from Ragged Island was immediate in this response.  Not a day like it he said.  Ragged Island must be and will be rebuilt.

Someone must have gone gotten to the Prime Minister because the next thing we knew he was crowing from rafters about how Ragged Island will be rebuilt, and how it’s going to be the first green small island community in The Bahamas.  Chastened, he was. The statement was stupid and shows how we have a Prime Minister who does not know our history and the fact of the defence of the country taking place there, way back in 1980 when the Cubans landed there trying to chase our Defence Force away.

That’s the problem with the FNM government, they think they know everything.  They are too smart for their own good and they don’t listen or think before they speak.

Dud Maynard who is now with them (the FNM) but then he was with the PLP when he used to say:  “Don’t let your mouth write a cheque which your ass can’t cash”