MINNIS: THE FAILURE OF THE DOG AND PONY SHOW 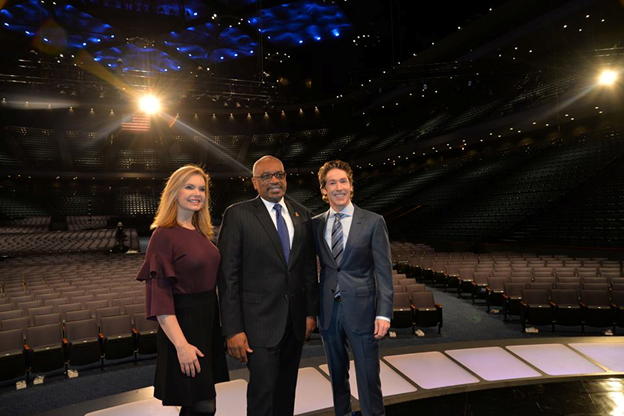 Official Photo of Pastor Joel and Victoria Osteen With Prime Minister Hon. Dr. Hubert A. Minnis In The Sanctuary Of Lakewood Church In Houston, Texas.

The Washington Post newspaper said that last year the now President of the United States Donald Trump told 2000 lies.  This is the President of the United States now.  We are not talking about the private record but on his public pronouncements.   The man who boasted that he has the larger nuclear button is also an inveterate and proven liar and so named by one of the most prestigious publications in his country.

Let’s transfer those thought to The Bahamas and we wonder if someone did a count, how many lies has the Prime Minister of The Bahamas told on the public record.  We are discounting for the moment the things that he told various voters about what he would do when he became Prime Minister and knew that he could not fulfil.  In a sense that happens to all politicians.  They have good intentions but just can’t in the reality of government get to do what you want to do. Let us examine what we can remember from the public record.

He said that when he came to office in a cost cutting measure, that all unnecessary foreign travel would be discontinued by the Government.  He claimed that this would save money for the Government.  That was a lie.  Within weeks of the utterance, he was off on trips to Caricom with a delegation of a dozen.  Then he went to Washington D C to court investors he said but it turns out it was just a welcome party for Ambassador Sidney Collie to Washington D C.  He also took a trip to Atlanta. The official reason was that he was going to court investors and  interact with the Bahamian Diaspora.  It turns out the real reason he went was to see his grand child in Atlanta.

Then he promised that he would be transparent when it came to the trips that he made.  He was so concerned that the Government should show the country that they were getting value for money.  The fact that the former Prime Minister Perry Christie and the former Foreign Minister Fred Mitchell did the very same thing was no bother.  He lied on them during the campaign and the lie continues now with this promise of transparency.

His explanation when he got back to Nassau and was confronted by it was that he would provide the details of the trip later.  He argued that he was in fact being transparent during the trip because his camera woman who could be heard like a little silly girl cooing, oohing and ahing as she  wandered into the inner den of Joel Olsten went everywhere that he went, except his bedroom.  Yes we heard why he would not want her in there. That was transparency.  Lord help us from the dumb.

The last example of prevarication we want to tell you is disclosed by the Leader of the Opposition Philip Davis on the floor of the House on Wednesday 24 January 2018.  Danielle Gibson and Holly Barrett were fired summarily from the Airport Authority from their work in Eleuthera.  They were competent officers.  They were fired because they were PLP.  Dr. Minnis told the Leader of the Opposition when threats were made against them in the summer that he would not let anything happen to them. He said the same thing to Andrew Burrows at ZNS.  Mr. Burrows is out at ZNS and the two women have been fired.

The dog and pony in show in Austin Texas produced nothing but that mug shot of Joel and Victoria Olsten with the Prime Minister.  The Prime Minister in his glowing response to being in Mr. Olsten’s presence told the pastor that he watches him every Sunday.  No wonder his government gets nothing done.  He has a lot of time to waste on his hands.