MINNIS: THE FIX IS IN ON LIGHTHOUSE POINT 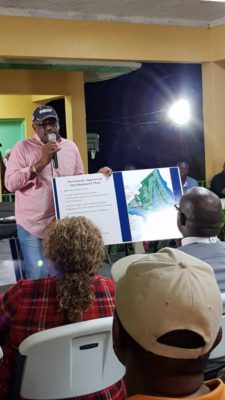 There was a town meeting in Rock Sound on Wednesday evening 10th October.  The Prime Minister was the host.  You knew something was up when there was a video circulating with a Junkanoo group waiting outside the airport for the Prime Minister’s arrival and he is dancing with the maidens of Rock Sound when he got on the ground.

The next step was a so called democratic vote which took place at the town meeting.  The video showed all those in favour raise your hands and those against well you know the drill.  There were both hands raised across the room and it seemed outside and screams of approval.  When the alternative proposal was advanced, there were boos and less approvals.  Clearly the Prime Minister had his answer and his marching papers.  His Member of Parliament Hank Johnson had done his job of turning public opinion around.

Okay, our bad.  What are we walking about?  We are talking about the future of a place called Lighthouse Point which in its pristine state is one of the most beautiful places on the planet and certainly in The Bahamas. The Disney Company of the United States and of cruise lines that go to Little Sturrup Cay right now and Little San Salvador want to add this spot to their ports.

If its going to be anything like what exists now on South Eleuthera connected to Little San Salvador, there will be an enclosure built with a fence around it. There will be a dock and dredging and then in 2022 says Disney, the passengers will start to disembark all for the praise and glory of South Eleuthera.

Those who say yes to the proposal Disney are being driven by their MP who makes the compelling case that there are jobs to be had in an economically depressed area.  The Chamber of Commerce head Tommy Sands says that the economy needs a boost.  The MP wants it and reportedly has had some persuasion money made available to the side on which he is on to make public opinion turn around.   Disney ought to be careful here if any of that money got into the hands of a public official that they do not run afoul of the corruption laws of the United States. They even had the Head of Disney write a letter professing his love for the people of Eleuthera.  What wonderful people indeed.

The other side is led by the Bahamas National Trust. They are no true members themselves but on this one they seem to have some bona fides. They say they cannot agree because it will be environmentally harmful. They have other groups like Re Earth and Breef to back them up.  They also have some wealthy second home owners and the people who are connected with the Island School, the environmental training high school run by American environmentalists which is South Eleuthera’s current highest employer, and something called the One Eleuthera Foundation who say hell no.  They want something which is environmentally sustainable not what Disney proposes.

The Prime Minister gave the game away. This was supposed to be a fair hearing. Instead it was a kangaroo court. He was to see the One Eleuthera people on Friday 12 October to hear their side.  Then he said the matter would go to the Cabinet on Tuesday16 October.

Senator Fred Mitchell, the PLP Chairman, said it this way. The fix is obviously in. When you see what happened in Eleuthera and when you hear that the Prime Minister dismissed all environmental objections in advance, then its clear what the decision will be.  Now we will see if the mother of clowns Fred Smith enters the picture and makes up some phony excuse to go court and stop it.

The we will know it’s really serious.

All that’s needed is fair process and the Government must act to protect the environment now and into the future.