MINNIS THINKS WE ARE ALL FOOLS 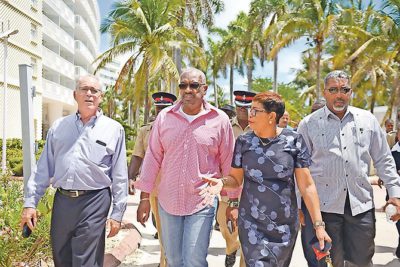 The Tribune photo of the Cabinet visiting Grand Lucayan Hotel

There was a real dog and pony show in Freeport last week on Wednesday 22 August.  The Prime Minister Hubert Minnis was the master of the circus.  He took his entire Cabinet and flew up to Grand Bahama to look at the newest possession of the Bahamian people, bought without their leave and to considerable opposition amongst thinking people in the country.

The pictures of the tour were there for all to see.  The Prime Minister open necked shirt and jeans, leading his Cabinet to look over the Grand Lucayan Hotel, now said to be owned by the Bahamas Government following a ten million dollar down payment, with the only other disclosed term that of paying a total of 65 million dollars and in periodic payments of five million.

This is remarkable from an FNM administration that said that it did not believe in state ownership of enterprises. They also said that the country was broke and that there was no money.  This puts the lie to all of that.  They can find the money for what they want.  The excuse is that the people of Grand Bahama need something to boost the economy. Problem is that when you look at the math, it would be better just to give the ten million dollars away on the streets rather than put into that hotel.

It gets more interesting. The loquacious Minister of Tourism Dionysio D’Aguilar told the press that guess what we don’t plan to spend any money developing it, we are only going to buy it.  The plan then is to flip the property.  Michael Scott who is the Chairman of the Hotel Corporation and presumably the enabling body which will hold the property said that the property will only be in the hands of the Corporation for three to six months; they plan to sell it. At a loss predicted Mr. D’Aguilar.  It’s not their money so no problem.

The Leader of the Opposition Philip Davis has said that he does not agree with the purchase of the hotel. The PLP’s position is that the money can be spent much better elsewhere.  There is simply no plan according to Mr. Davis.  How much will it cost?  What is the marketing strategy?  Will it be taken over as a going concern?  Will the employees be retained or will they be dismissed?  Who will cover the cost of the severance if that is the direction one has to go?

The FNM of course does not pay attention to history.  They had Maurice Moore, who is their resident elder statesman and cheer leader, saying that he thought that the hotel ought to be bought.  However, Mr. Moore would forget that in the 1970s, the Pindling administration used the same Hotel Corporation to buy that hotel property before.  The whole thing tuned into a mess that the contractor couldn’t finish and it was a hole down which money was poured with no end. In the end, the administration dumped the property on Genting, the people who are now in Bimini and that did not last as long as paddy in the army.

The FNM of course trotted out the vendors across the street in Port Lucaya.  They are so desperate for something that it is easy for them to say they agree to the sale in the hope, a vain hope we might add, that there will be some uptick in economic activity.  But it cannot be anytime soon. The Government again simply plans to buy the hotel and hold it until they sell it.  No development, no marketing just hold it.

Clearly, the FNM Government and Mr. Minnis are geniuses and we are all fools. That must be it.

So much for the Fiscal Responsibility Bill which the FNM said was supposed to impose limits on Government’s impulsive spending habits. We told the public it is absolute nonsense but who is listening. After all, it’s the people’s time.