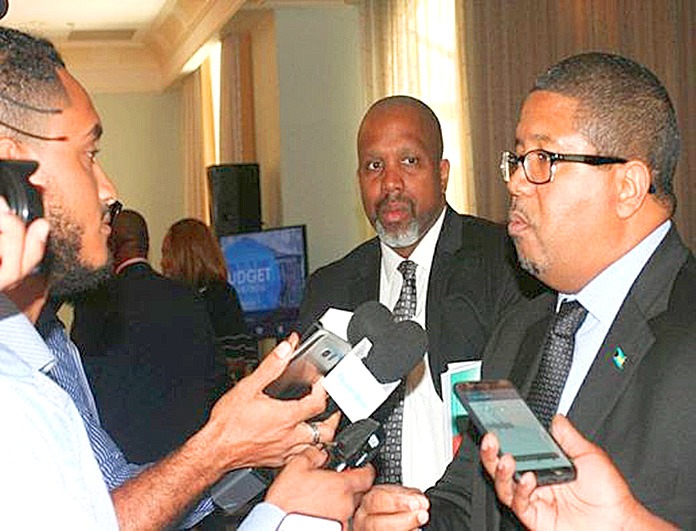 When you form a government, everyone is supposed to be singing from the same hymn sheet. The music is supposed to be in time and everyone on the same note. That is the way the Government has credibility.  If it sounds like a choir and the chorus is concordant then the country may be convinced that you are on the right track.

Mixing all those metaphors in the first paragraph was simply to say, that if you use that as a standard to judge the performance of Peter Turnquest and the Minnis led Administration of the FNM, they are badly in need of a new conductor or something. They cannot get their own story straight over this budget.  They have been all over the place.

You have the Financial Secretary Marlon Johnson engaging in political commentary in the mud pit with partisans of the other side slashing and burning on his Facebook page contrary to the rules of the public service. His defence is that the Budget saved us from a credit downgrade, except that we are already at junk status said his Minister of Finance.  That one didn’t wash.

Then you have the Prime Minister saying that he changed his mind about taxes because he had to stop the devaluation of the Bahamian dollar. Expect that the Bahamian dollar can never be devalued because it its value is pegged to the US dollar in perpetuity and there are no goods to trade that would make a competitive currency valuation make any sense.  That one didn’t wash either.

Then you had the hapless and hopeless Minister of Finance who said he had to save the nation with this budget because the PLP left so many unpaid bills but couldn’t get the forecasts right and the deficit was ballooning out of control.  He can put that in his pipe and smoke it because the deficit is not going down, his forecasts are also off and the national debt has risen under him.  So that one didn’t wash.

Peter Turnquest is a testy fellow.  Takes injury easily. Has a reputation for being imperious, arrogant and dismissive.  He spent the first five minutes or so of his address to Parliament excoriating the PLP because they bailed out on his speech in Grand Bahama at the Labour Day Parade.

You had the FNM MP lambs to the slaughter like Shannondon Cartwright, James Albury, Carlton Bowleg, Don Saunders, Reuben Rahming and Hank Johnson all saying what a wonderful budget it was.  Lose us and tie the donkey.

It is clear though that they are not all singing from the same hymn sheet.  There are dissenting voices in the camp.  Mr. McAlpine thinks he can save himself and save them too by doing a Leslie Miller but what the Leslie Miller experience shows is that all go down with the ship.

Bottom line, Peter Turnquest will end his career on a sour note.  Certainly the most unpopular Minister of Finance in the history of the country, a fact he gives not a hoot about presumably. We understand that he does not intend to run again so matters not to him what happens. He is straight. That’s why he said not a word about Grand Bahama in his debate or in his communication.