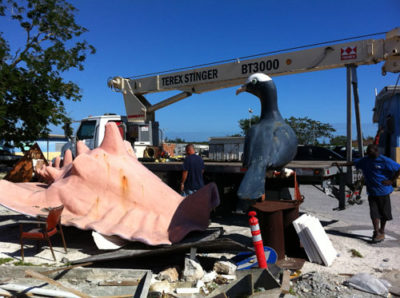 On 2nd October 2013 this photo and caption appeared: Grand Bahama Shipyard Helps to Restore Iconic Nassau Conch.  Toby Smith, while helping his daughter with a project decided to restore sculptures made by Stephen Burrows, including the iconic conch which was created in 1980, and was displayed on the roundabout near the Nassau International Airport. Smith contacted Reuben Byrd, Vice President of Operations GBS to assist in the restoration of the sculpture as the Shipyard had the necessary equipment. “Mr. Byrd agreed to help with just one phone call, and never having met me, his willingness to help moved me deeply,” said Smith. Pictured is the conch sculpture before its restoration. (Photo: Toby Smith)

The following tribute to the Late Stephen G.E. Burrows from the Ministry of Youth, Sports and Culture was published on 27 September 2018

Tribute to Mr. Stephen Burrows Bahamian Sculptor and Metal Artist From The Ministry of Youth, Sports and Culture:

The Ministry of Youth, Sports and Culture was saddened to learn of the passing of prominent Bahamian artist and sculptor, Mr. Stephen G.E. Burrows.

Sadly many Bahamians do not know Mr. Burrows by name; but undoubtedly we all know him by his steel and metal art sculptures that stand regal and tall at many roundabouts and key points in New Providence and many Family Islands.

Born during World War II, Mr. Burrows loved art at an early age and found himself making things to sell to assist his family during economically hard times.

It was said that a gentleman gave Mr. Burrows a sound piece of advice when he saw the things Burrows made as a boy, he said, “boy you smart, read, read…and read.”  Young Burrows did just that and eventually learned about welding.  No one taught him to weld.  He observed, found a book on welding and then began trying his hand at it and the rest, as they say, is history.

Perhaps the most famous piece done by Mr. Burrows was his first to celebrate Bahamian Independence, the Coat of Arms.  We also honour his international contributions namely the 18-foot Iguana which he made in 1984 that was a gift from the Government of The Bahamas to the Wadsworth Atheneum Museum of Art in Hartford, Connecticut.

A giving man, Mr. Burrows was never financially compensated for his amazing works. Instead, he requested that educational scholarships be provided for young deserving Bahamians. Mr. Burrows recalled a comment made by a German man observing him at work, “if you lived in Germany you would be a millionaire for your work!”

We remember Mr. Stephen Burrows in our prayers and extend condolences to his wife, seven children, extended family and friends.  May his soul Rest In Peace and Rise In Glory.

To quote the poet, Rumi: “Die happily and look forward to taking up a new and better form.  Like the sun, only when you set in the west can you rise in the east.”