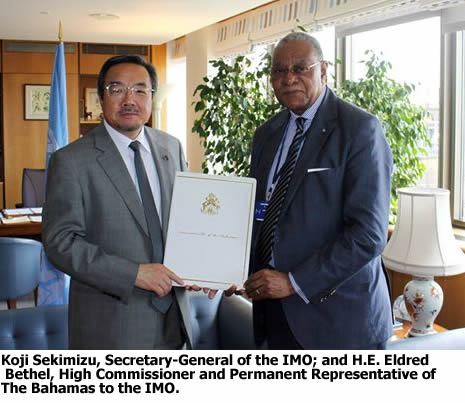 LONDON– ?Bahamas submits the Instruments of Accession to the Nairobi International Convention on the Removal of Wrecks

cialis generic times;”>The Bahamas has become the twenty-second Contracting State to the Nairobi International Convention on the Removal of Wrecks. High Commissioner H.E. Eldred Bethel, Permanent Representative of the Commonwealth of The Bahamas to the International Maritime Organization (IMO), met IMO Secretary-General Sekimizu to deposit the Instrument of Accession to the Convention at IMO Headquarters on Friday 5 June 2015. .

The Convention, which entered into force in April this year, places strict liability on owners for locating, marking and removing wrecks deemed to be a hazard and makes State certification of insurance, or other form of financial security for such liability, compulsory for ships of 300 gross tonnage and above. The twenty-two Contracting States now represent 37.64% of world merchant shipping tonnage.

The High Commissioner stated that as a responsible member of the Council and the IMO, The Bahamas will continue to play it’s part to uphold and support the organization through the ratification and accession of the various conventions and protocols; leading to safe shipping on clean seas. The Secretary-General thanked The Bahamas for their leading role in supporting the work of the IMO and their active participation in Council and Committees, and looked forward to their continued support. 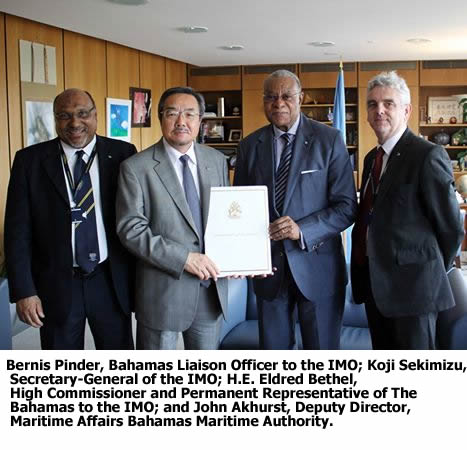 NEW YORK — The Hon. Daniel Johnson, Minister of Youth, Sports and Culture, and Mr. Darron Turnquest, Director of Youth, paid a Courtesy Call to The Hon. Forrester J. Carroll, Bahamas Consul General to New York, on Monday, June 1, 2015 at Bahama House, 231 East 46th Street. The Minister and Mr. Turnquest were in New York to attend a “High-Level Event on the Demographic Dividend and Youth Employment” at the United Nations. Picture from left to right: Minister Johnson, Consul General Carroll, and Mr. Turnquest. 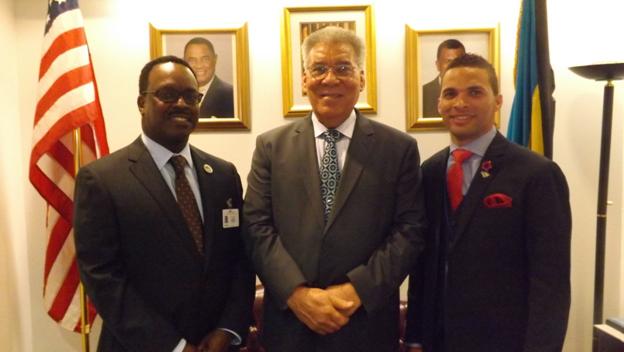 NEW YORK — The proclamation of Caribbean Heritage Month in the State of New York was celebrated in dignified style on Tuesday, June 9, 2015 in the State Capitol, Albany, New York.

Marking the occasion were Assembly and Senate Sessions that saw the adoption of legislative resolutions in which New York Governor Andrew Cuomo proclaimed June 2015 as Caribbean Heritage Month in the State of New York.

Among the specially invited guests of those serving in the New York State Legislature who are of Caribbean-American descent were H.E. Dr. Elliston Rahming, Ambassador and Permanent Representative of The Bahamas to the United Nations and the Organisation of American States, and the Hon. Forrester J. Carroll, Consul General of The Bahamas in New York.

In the context of the special event, Ambassador Rahming and Consul General Carroll were introduced and recognised during the Assembly and Senate Sessions and presented by Governor Cuomo with an Executive Proclamation recognising the month of June as Caribbean American Heritage Month, in celebration of the distinguished New Yorkers of Caribbean ancestry who have made their mark in history.

In keeping with this objective, Ambassador Rahming took the opportunity to present a congratulatory letter, signed by the Rt. Hon. Perry G. Christie, M.P., Prime Minister and Minister of Finance of The Bahamas, to Assemblyman Carl E. Heastie, the first African-American to serve as Speaker of the New York State Assembly, who was elected to this high office on February 3, 2015.

Speaker Heastie has ancestral roots in The Bahamas and the Prime Minister conveyed in his letter that Speaker Heastie’s noteworthy accomplishment was a source of great pride, as were his shared heritage and kinship with The Bahamas.

Ambassador Rahming and Consul General Carroll joined numerous other colleague Ambassadors and Consuls General from the Caribbean at the day’s sessions, which culminated in a legislative reception. 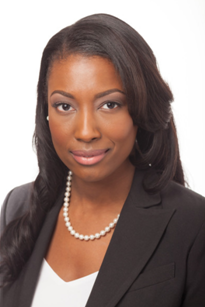 WASHINGTON, D.C. — A new initiative aimed at providing a forum for young Bahamians in the diaspora in the Washington, D.C. area “to present and dialogue on their research or work and cultivate ideas for the betterment of The Bahamas” will be launched by the Embassy of The Bahamas in Washington, D.C., on Friday, June 12, 2015, beginning at 6:30 p.m. at the Embassy, located at 2220 Massachusetts Avenue, N.W.

Held under the patronage of His Excellency Dr. Eugene Newry, Bahamas Ambassador to the United States, the first speaker for the “YOUNG BAHAMIANS CONVERSATION SERIES” will Ms. Aisha Bowe, a 29-year-old Bahamian aerospace engineer, who has worked as a researcher at the NASA Ames Research Center and currently is CEO and Founder of STEMBoard.

She will speak on the topic: “Economic Diversification through Technological Infusion: The Power of STEM Education,” during which she will discuss her vision of Bahamian development through technological infusion.

Ms. Bowe co-founded STEMBoard in 2013, a company that is also committed to closing the achievement gap by empowering historically underrepresented youth to build transformational technologies. She has an impressive background as an aerospace engineer who manages STEMBoard’s multi-million defense-contracts and private sector clients. STEMBoard is composed of aerospace and defense engineers who are leading innovative and disruptive change within the defense and intelligence community.

She also demonstrates the commitment to stem education in The Bahamas, where she has organized an annual summer technology camp — Hack.IT Bahamas — which will take place this year from July 13-17, 2015, at St. Andrew’s School in Nassau, Bahamas, and where the keynote address will be delivered by Dr. Bernard Harris, who was the first African-American to walk in space. 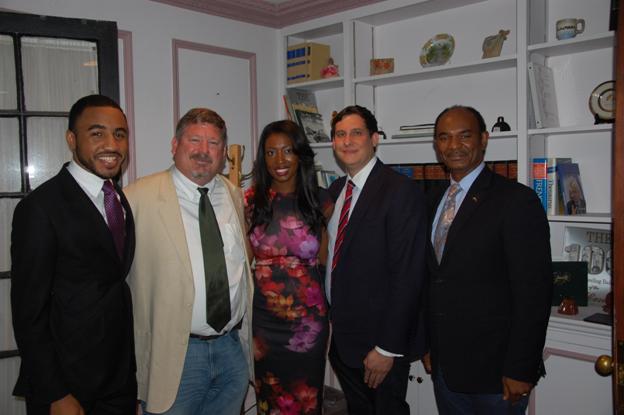 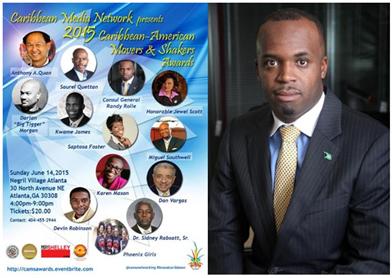 ATLANTA, Georgia — From being born on an eight-square-mile island known as The Bahamas retreat for the late Dr. Martin Luther King Jr. to being honoured in Atlanta, the city that Dr. King called home, Randy E. Rolle is proving that despite being one of the youngest Consul Generals ever to represent his nation, he is truly worth being honored at this year’s Caribbean American Movers and Shakers Awards.

“The 2015 list of honorees highlight the best of the city of Atlanta, Georgia,” stated Caribbean Media Network Founder and Organizer Michael Thomas. “The annual recognition identifies professionals and civic-minded individuals of Caribbean heritage, living in the metro Atlanta area, who have contributed to the multicultural community.”

The event will be held at the urban chic restaurant Negril Village, on Sunday June 14, 2015.

Added Thomas: “This year we will be recognizing our Youth Pioneer Honorees Phoenix Girls; Humanitarian of the Year, Mr. Saurel Quettan of Food for the Poor; and our Lifetime Achievement Award Honoree, CFO and Strategy- Pacific Group at The Coca-Cola Company, Anthony Quan.”

The 2015 Caribbean American Movers and Shakers Awards include a series of award events, in the prime markets of Atlanta, Georgia, New York City and Miami, Florida, throughout the year.