THESE FNM MINISTERS HAVE BAD MANNERS 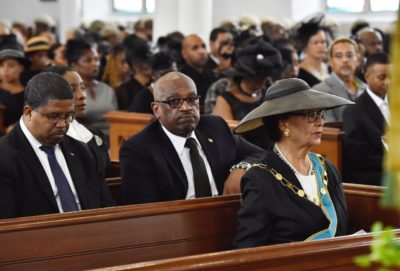 The picture of the Prime Minister Hubert Minnis and his Deputy Prime Minister Peter Turnquest are pictured at the state funeral for the late Chief Justice Stephen Isaacs in Christ Church Cathedral on 7 September in Nassau. Dr. Minnis looks totally out of it and lost. Peter Turnquest is having a look at his phone.

The picture sums up perfectly what we want to say about the FNM and their government.  They simply have no feel for this stuff.  They are in over their heads.  They are out of their depth. Dare we repeat what we said many moons ago: they are lost in space.

What also disturbs us is that they are blissfully unaware of their ignorance. Further, that they are rude, boorish and uncouth with it.  As the late James Catalyn would have said, they have no “broughtupsy”.

Here is a simple example.  During the week when school opened in The Bahamas to all the confusion, the Prime Minister Hubert Minnis chose to go to two constituencies.  Not one of his own or the seat where is the MP, but he went into two seats that are represented by PLP MPs.  He went to San Salvador and Rum Cay where the MP is the Leader of The Opposition Philip Davis and then he went to Exuma where the MP is Chester Cooper, Deputy Leader of the PLP

There is a simple courtesy which is involved in these visits usually dating back from the days of Sir Lynden Pindling. If you are going into another person’s constituency by reason of your official capacity, as a courtesy you should inform the MP for the area.  The Prime Minister did not do that with school visits. Not only he did not inform the two men, but he went further and sought to duck meeting them while there by refusing to cross paths. It was most interesting.

What more can you expect though from him and the FNM.

They are in the process of embarrassing all the institutions we have. No matter what you tell them about their boorish behaviour it does not stop.  It is much like the rude and piggish behaviour of Donald Trump, the President of the United States. Anything goes.  His allies refuse to see anything wrong and the ordinary rules of civility go out of the window.

There are cogent reasons for the rules of civility.  They give a certain predictability to the way things run.  No surprises. We all have a code of conduct by which we ought to behave and we stick by those rules.

These FNM people have thrown all of that out of the window.  They believe that having won 35 to 4 that the status of geniuses has been conferred upon them and in their right, there are none to dispute.

The only glimmer at the end of the tunnel is the people seem to be getting tired of the blame the PLP mantra in which they are constantly engaged.  It’s wearing thin.

We can all see slowly and surely what a complete waste they are.  They have messed up the country’s finances.  Fired people since coming to office so that there is no work.  They cannot even get the count straight at the Point Development with the Minister for Labour saying that the straight-out requirement for 70 per cent Bahamians on the job is not what we all read in the agreement.

That’s the FNM for you. Lie after lie after lie. People can’ t wait for this election to come to vote them out of office.