UNDER THE FNM THE SPORTS PROGRAMME IS GONE 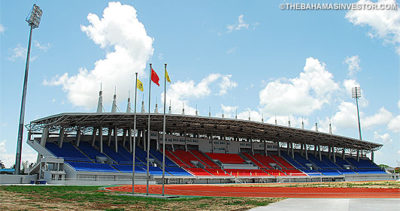 This letter first appeared in The Tribune:

WHAT is happening at the National Sports Authority?

In an era when government appointed boards are getting so much attention, there is more trouble on the board horizon as the National Sports Authority (NSA) seems to be in a state of total chaos.

On the heels of the BPL board saga, we have learned that the NSA has been broiled in what some close to them term as “nothing but drama.”

Reappointed chairman Vaughn Roberts has held the position since July 2017 but has been totally ineffective as chairman and has allowed the NSA to wander aimlessly without leadership or direction.

Further, the board which was at one point labeled as a highly skilled board has been the epitome of a dysfunctional group, having no leader and no one to help drive the process. It is not clear why the previous minister responsible supported the appointment of a chairman who does not even live here in the Bahamas and is only here one day per month to hold meetings, especially coming off such a high in the last few years.

According to one senior employee, “this is the worst I have seen it in years. Morale is low, credibility has been lost and there is no real relationship anymore, we have lost some good people who made a lot of contributions to what the NSA has become, we don’t mind changes but we have come to a new low, as it seems like no one cares anymore, at least the people we had here cared about the NSA and cared about the staff”.

The board members that were listed in the governments publication of boards by and large appear to be good people, just like the BPL board, but why they have not gotten their collective act together is a mystery to many. While it is not certain what the ills of the BPL board were, it is clear that the NSA board is in a total state of chaos. They have full representation from a cross section of the community yet, here they are in total dysfunction.

According to one of the board members, the NSA lacks leadership and vision and should have had a strategy by now, a business plan if you will. Today, there is no plan and we are living in a global economy where we are trying to run with the big dogs and yet we act like puppies, and that requires leadership and we don’t have that.” He went on to say that, “we have the best sports park in the region and what are we doing with it, we should be out there tell the world, inviting the world to come to see what can be.

A senior member of the Ministry of Sports who spoke on the condition of anonymity said that the NSA has had its share of challenges but they were working with the board to correct them. When asked specifically what some of those challenges were, the officer said, a lack of management in place for a very long time, in fact several senior management positions remain open, and the board needed to be more proactive in assisting with making things happen so that the NSA can begin to focus on the larger plans.

Some of the major sports association leaders have also weighed in on the NSA and their state of affairs. A senior track and field official said that, while they were not a huge fan of previous NSA management, they have never seen the facilities so run down with no management oversight and staff that did not care or are being cared for.

Another said that the previous minister (Pintard) forced changes at the NSA which were not necessary as quite a bit of positive things were done that were working for the entire country and gave the previous team kudos for their efforts considering the extent of political interference by the previous administration.

Many have criticised the former minister who is now at a different ministry for what many have termed his shortsightedness in developing good relationships with the sporting community and with the NSA. His attitude was very reflective of the administration’s attitude of aggression, distrust towards those they found in place. Rather than seeking to understand what was happening and working with them, he acted mean, bitter and angry, haughty and disrespectful in many ways.

Take a look at most of the leading sporting associations, none of them will tell you they enjoyed a good rapport with the minister nor the ministry as the ministry itself is undermanned and under equipped. That senior member also spoke of the minsters rush to fire the former chairman only to come back a short time later and apologize to him for acting without cause. He went as far and hosted a reception complete with praise and worship so he could “big up” the former chairman in the eyes of the employees, but the damage was already done and many saw this action as a slap in the face. From that point on, confidence was in short supply in the minister.

It did not help that he had not plan for sports development hence he had no use for the NSA, nor for his team according to the senior sports officer, he could not have been more wrong, sports is crucial to the development of any country, especially one like the Bahamas.

We have also learned that the minister was quite aware of the board dysfunctions, the constant absence of the chairman and chose to ignore the calls from various board members to address the matter, in fact, at least two board members have confirmed that they personally spoke to the minister on a number of occasions about the state of affairs but he did nothing.

We have also learned that under this chairman the board was allowed to have a sitting member who was not properly appointed but sitting in place of another member who could not take his place, we were referred to the Act which does not permit this. Truth is, that in accordance with the Act, the meetings held are null and void and any decisions taken by the board should be set aside as the board has an illegal member sitting on it. This was no different than when the previous administration allowed the board to be expanded to accommodate the sitting PS to serve, receive the approved stipend and vote.

Quoting a former MP who recently commented on the reassignment of a senior foreign service officer with a stellar career to the post of PS at the ministry of sports as having been sent to the equivalent of a Siberian prison, one can appreciate that even among senior politicians an appointment to the ministry of sports is no considered a vote of confidence by our nation’s leaders.

The ministry and the NSA have its work cut out especially after the last minister lead the effort to cancel the world relays and withdrew financial support for most events. This means that the NSA has to really focus on getting it act together and in the face of this challenge, one wonders why they have lost sight of their reality.

Nonetheless, nothing is expected to change and the NSA does not appear to have the collective courage to make the necessary changes nor does it have a chairman who cares that under his watch the NSA has tumbled into the state it finds itself it.

Let us not lose sight of the fact that it is also the taxpayers’ dollars that underwrites this dysfunction as each member of the board is paid with tax dollars and in an era where we are minded not to waste money, the question needs to be answered as to why our leaders have not addressed this critical matter as yet. Members of the board appear to be content to collect their monthly stipends and do nothing for the Bahamian people.

It is hoped that with the new minister taking the reins, that some real decisions will now be made.

Another employee who is attached to the NSA, told us that, you always know what you have but you never know what you will get, speaking to the changes that were made.

We also spoke with a member of the grounds crew who spoke quite openly about the fact that they don’t even know who is in charge at the NSA.

We have confirmed that since the resignation of the former general manager, there has been very little done to fill that position and the other open positions at the NSA.

However, there are several members of the board who appear to want to speak further but remain cautious about their comments, given our history of retribution.

Whatever the issues, it is clear that the NSA board and its chairman must be seen as taking their jobs seriously and trying to recapture the momentum that was lost. Sports were indeed working for the Bahamas and former minister Johnson recently said that; “we did a magnificent job of putting the Bahamas on the map through sports hosting and at one point had more than 17 events on our calendar showcasing this destination, you could not ask for more”.

With recent cancellation of the IAAF World Relays, and the governments new disposition on funding events at a loss, the NSA board will be hard pressed to find solutions to booking new events.

As of now, with no management in place, no leadership at the board and a completely dysfunctional board, low employee morale, many would agree that they have their work cut out for them, otherwise, the sitting minister should do what the minister with responsibility for BPL did, he should ask all of them to resign. If the Minnis administration were serious, it would also look into the NSA as well.

For the Bahamian People