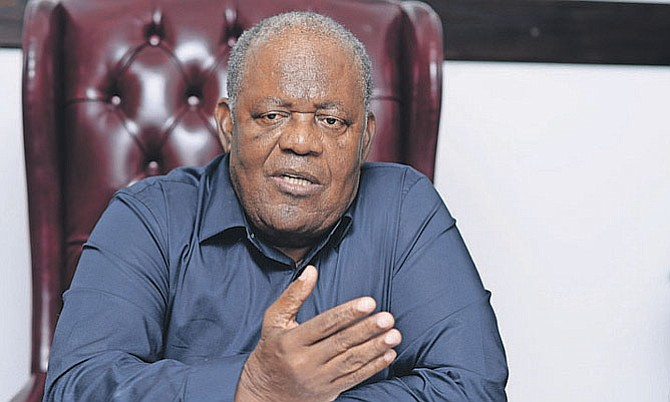 In his own words speaking to The Tribune’s Rashad Rolle on 28 November:

“If they say they want a business to open up and a foreigner could get a permit automatically after 14 days and they want to limit this and the other benefits of the bill to a place like Freeport, that’s something that I, as an ordinary Bahamian, could swallow, but I cannot swallow that for The Bahamas, as a national policy, foreigners can come in for only $250,000 and open these businesses without us knowing how many Bahamians will be employed.

“That’s not kosher for me. I’m sorry, but every now and again I reserve the right to speak my mind about matters that come up with the public.

“Back in the 50s when the government wanted the hotels to have this provision, they said that you had to have at least 75 per cent of your staff Bahamian. The PLP government repealed that and said that is unfair to the Bahamas; but in that case, you at least had a minimum threshold for the number of Bahamians employed. That same concept has been discarded in Freeport, where the Hawksbill Creek Agreement in the 1950s provided that people in Freeport, licensees, could bring skilled persons into the Bahamas to work and the Bahamas could only refuse permission for them on the grounds of personal undesirability. Those policies since discarded are coming back again. Those who’ve been around for a long time don’t support it coming back; it’s not in the interest of the Bahamas in our point of view and I’m very clear about that.

“If there is going to be a guarantee in law of a certain number of work permits they should speedily move toward determining that guarantee for other people and businesses. How many for Atlantis? How many for Citibank? How many for Baha Mar? Or is it going to apply to these particular businesses only? “Normally what would happen is Atlantis would say I’ll hire 3,000 people and then there will be a heads of agreement that says you can get a certain number of work permits but only in relation to what employment levels you would have for Bahamians. There’s a big difference between that and saying to somebody if you want to invest $250,000 and work in the Bahamas and bring a certain number of people you could do so but you don’t have to say how many Bahamians you are going to employ. All of that for $250,000? Oh no, no, no. If I have to accommodate you, what will I get in return?

“The national policy has been you get the work permit if there are no skilled Bahamians available but it has never been that a company is entitled to a certain number of work permits. If that policy is going to change and it appears to be changing, then it seems to me that there will need to be a national consensus between the political parties because otherwise what you will have happen is people who are going to invest will take account of the Bahamas’ history; in recent times, we have been voting the government out every five years so the investors will think, ‘if I do this deal now because they promise me this and the next fella say he’s going to repeal it when he gets in, it’s not going to be very effective.’ I would suggest that the government seek to have a policy that could be agreed between itself and the opposition. Both of them should recognise we need to make some changes to immigration if we are going to make the Bahamas a more attractive place for investment.
“Through the National Economic Council (NEC) and the Bahamas Investment Authority, it has been a longstanding policy of the Bahamas since the 1990s to offer concessions to international businesses that invest a certain amount of money in the country.

“The threshold was raised to $500,000 in my last administration in 2011. I note that Dr Hubert Minnis, Works Minister Desmond Bannister, Financial Services Minister Brent Symonette and Labour Minister Dion Foulkes were all Cabinet ministers at the time and agreed to the amendment.

“The rationale was we wanted to encourage investment and we thought $250,000 was too small. Sixteen years from then we may have removed that threshold further up but certainly not reduce it in half. They ought to explain how they have now arrived at $250,000.

“To say that I can in 14 days approve or have your permit deemed to have been approved does not give me enough time to determine your suitability, your character and the rest of it. You are a foreigner. Every foreigner who comes to the Bahamas needs permission from the Bahamas to come here. And so I would not be prepared to open myself up to say just come, apply and if you don’t get an answer in 14 days go to work. That’s a matter of judgment but I’m not for that.”