Photo Of The Week

LONG LINES TO THE BANK IN ABACO:  people were standing for hours in Abaco and in other places in the country to get into banks and food stores because of the stupidity of the government in ordering a national lockdown for 24 hours for two weeks. People were angry and in a foul mood. Our photo of the week showing the long lines in Abaco 6 August 2020. 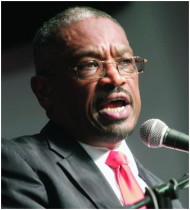 THE COLLAPSE OF THE MINNIS ADMINSTRATION

Things have gone from bad to worse for the Hubert Minnis administration.  The evidence is there that the country has had it with him and can’t wait for a general election to be called to get rid of him and the group of insensitive incompetents that inhabit around him. He leads them in incompetence. The one that strikes  us is the report from the nurses who walked off their jobs in both Grand Bahama and Nassau last week.  They said that the Prime Minister was visibly irritable and obviously tired in their meeting on Thursday 6 August 2020.  He told

THE COLLAPSE OF THE MINNIS ADMINSTRATION

Things have gone from bad to worse for the Hubert Minnis administration.  The evidence is there that the country has had it with him and can’t wait for a general election to be called to get rid of him and the group of insensitive incompetents that inhabit around him. He leads them in incompetence. The one that strikes  us is the report from the nurses who walked off their jobs in both Grand Bahama and Nassau last week.  They said that the Prime Minister was visibly irritable and obviously tired in their meeting on Thursday 6 August 2020.  He told

Be warned about Dame Joan Sawyer.  She is no one’s friend politically.  So last week, she went off on the FNM, just as she had on the PLP a few months before and during the election period.  The words on Hubert Minnis are helpful to the progressive cause but PLPS should be warned keep your distance. She can turn on you in a minute.  She said the lockdown is unconstitutional. Well if she thinks so, she should challenge the law. Here is what else she said to Guardian Radio: “What they’re doing to you is placing you under house arrest. 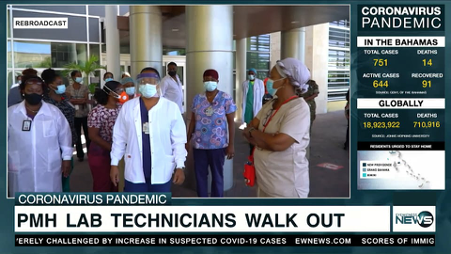 Both the doctors, the nurses and also the technicians told the Government they had had enough of the bad management of this Covid problem.  So they called in sick and staged a walk out until they could get assurances on the way forward.  No word from the hospital authorities through the whole live long day. 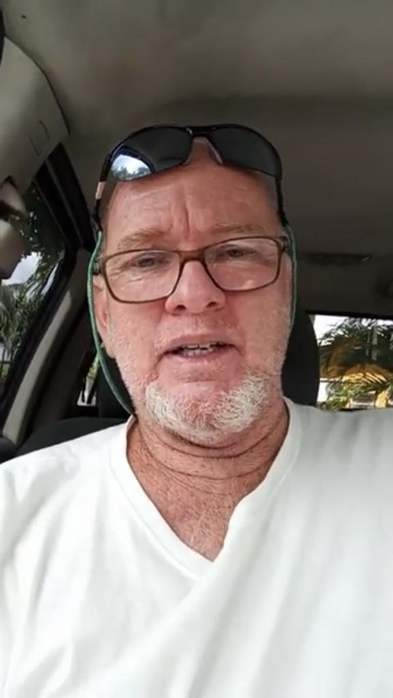 William Roberts of Abaco had a heart felt video on  his Facebook Page in which he  told the story how he had been trying to bet his NIB payments and the run around he was getting from NIB without an answer.  He said that Bahamians have this view that white people all have money but he said “I am fucking broke”. Several people have reached out to help Mr. Roberts but this is instructive of how the problems in the country have been exacerbated since the FNM and its mismanagement. 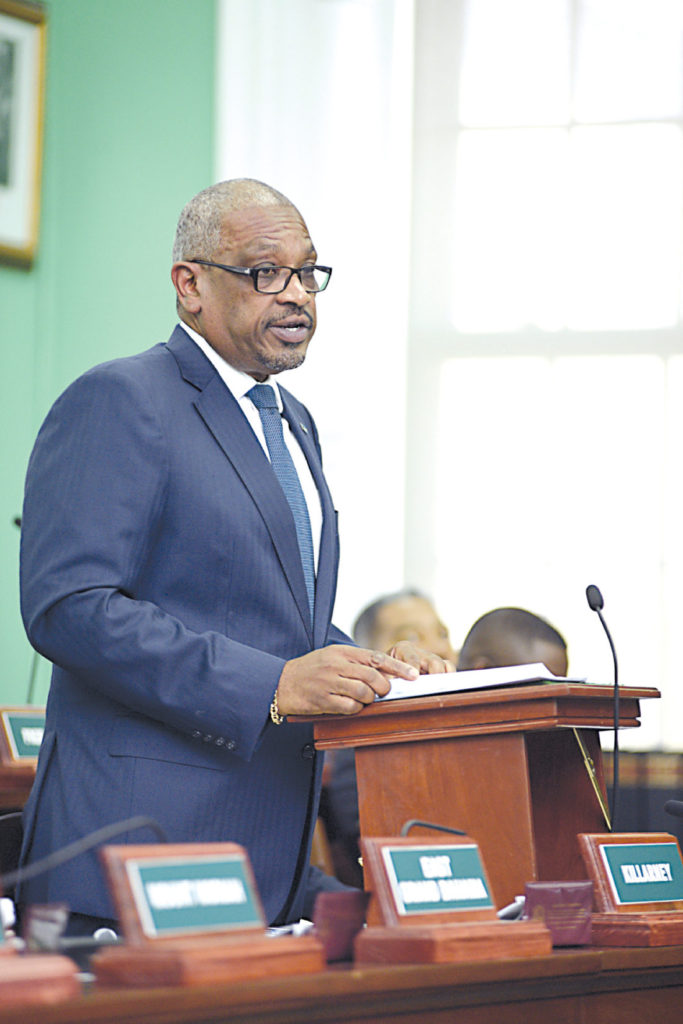 So Dr. Hubert Minnis met with the nurses on 6 August 2020 following their industrial action at the Princess Margaret Hospital because they are not being supplied with the proper protective equipment.  He started off the meeting saying he did not want to talk about Covid.  He had a bad day on  Wednesday evening and he don’t want to talk nothing else about Covid.  Meanwhile the nurses are still owed their monies from working overtime from March and cant get paid. Wonder if he is tired because of that. 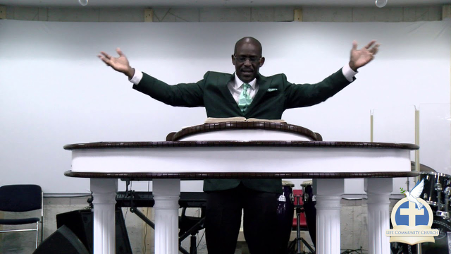 PREACHERS IN REVOLT IN GRAND BAHAMA OVER THE LOCKDOWN

Rev Cedric Beckles, not normally a supporter of the progressive cause, and a pastor of Life Community Church in Grand Bahama, said in a seven minute and fifty eight second voice note that he had had enough with the Government telling the church that they cannot have services.  He invited his congregation to join him at church on Sunday, today.  The pastor at Tabernacle join him a few hours later. Pastor Keith Russel at First Baptist says next Sunday the same for him. They said they were not encouraging anyone to violate their personal beliefs but they would be welcome 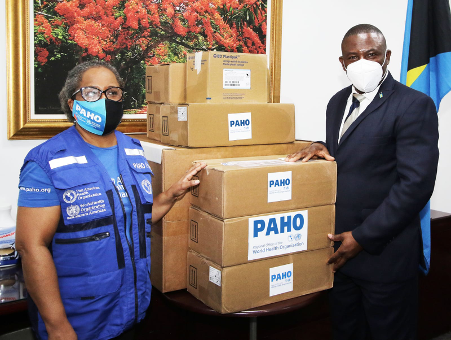 THE NUMBERS OF COVID CASES ARE OUT OF CONTROL

The Minister of Health Renward Wells was putting on a good show but las bless his heart, he is simply lost in space. He held his first press conference on Friday 7 August 2020.  The Nassau Guardian described it as a wasted two hours.  They said all he kept saying was that the Prime Minister will address it when he addresses the country on Sunday.  So who did you was the Minister of Health again? 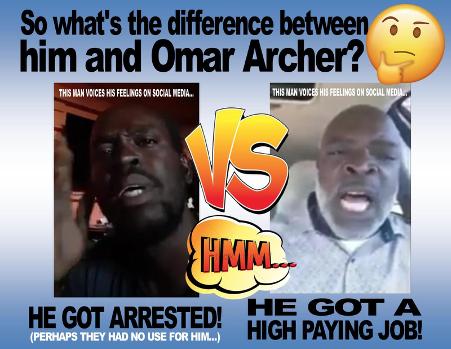 Obviously at the Ministry of Works, the tail wags the dog. There is a particular fellow who works there in a senior contracted position.  He was an FNM operative, the kind in the last election, who specialized in sending out nasty voice notes and video notes, filled with lies, invective and salacious falsehoods  about PLPs.  Last week he was at it again.  What we say again to PLPs, why do you listen to this stuff.  The man is obviously mentally ill.  He has a sordid fascination with the anal sex and the talk around town is that he is  a 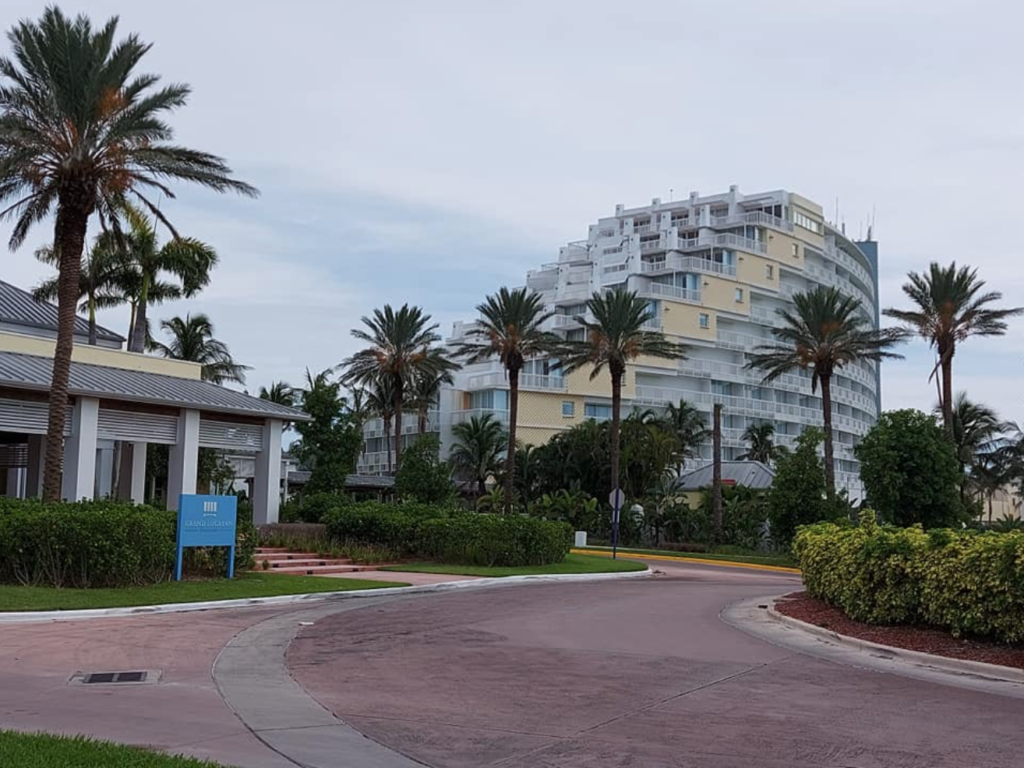 BRIAN SEYMOUR FROM FREEPORT SAYS: PIN THE TAIL ON THE DONKEY

Minister Quasi Thompson gave new meaning to the children’s game of Pin the tail on the donkey. The Bahamian people play acting as the Donkey. Minister Thompson disclosed that the Government was about to purchase the Hurricane damaged Grand Bahama International Airport which was severely damaged by hurricane Dorian in September 2019. Under the terms of the Hawksbill Creek Agreement, the airport remains the responsibility of The Grand Bahama Port Authority until 2054 when the 99-year Lease agreement comes to an end. It is believed that the airport was insured, but the Port Authority’s managing partners, Hutchison Port Holdings refuse 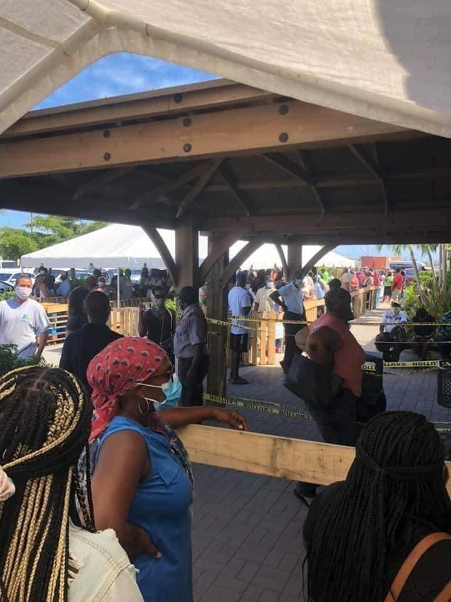 THE FNM TROLLS HITS BACK AT THE PLP: BE QUIET

So Ed Fields led the way.  Typical FNM line.  The country is in acris and we must all pull together so we must be quiet while the FNM wrecks us and the economy with us. Tell that to these people on the lines in Abaco to get into the food store on Friday 7 August 2020.  PLPs were having none of it and here was their published response on line: Today was not a good day for the Bahamas and not at all a good day for the Government. In my humble opinion I am well within my rights to 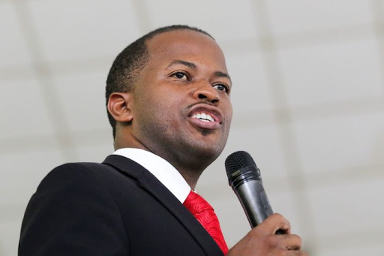 THE FNM BOOMBA FLIES SING FOR THEIR SUPPER

So the Prime Minister Hubert Minnis does not have the courage to deal with Fred Mitchell face to face huh.  So he sends the little boy in the Senate to do his dirty work.  We call these ass kissers that do the dirty work of the Prime Minister and the FNM leadership: FNM boomba flies.  They specialize in kissing ass aka brown nosing.  Last week, The Tribune published a letter by one of them attacking Mr. Mitchell. Beware of the boomba flies.  And never send a little boy to do a man’s work.  Hand us that fly swat. 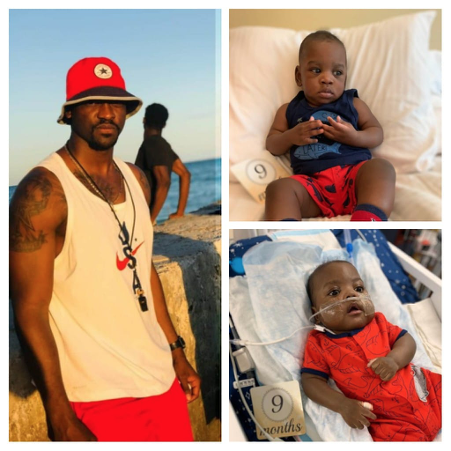 Within days of the taking of this photo of the two boys, Dylen, who has been in hospital since his birth sadly passed away 7 August 2020. He was only nine months old.  Our condolences to the Coach at Doris Johnson and Dylen for the valiant struggle to that you put up while God had you here with us, may you rest in peace.  We will meet you in the morning. 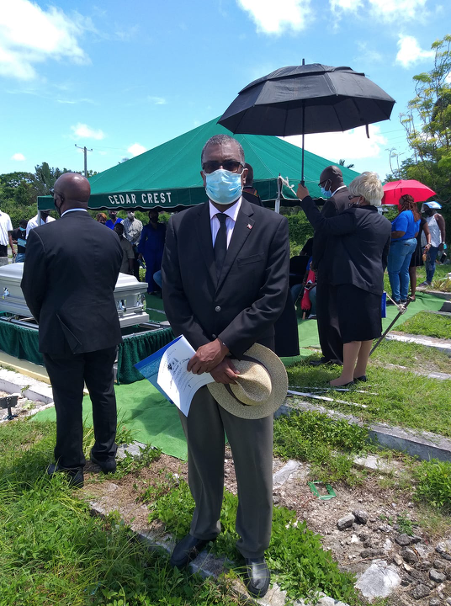 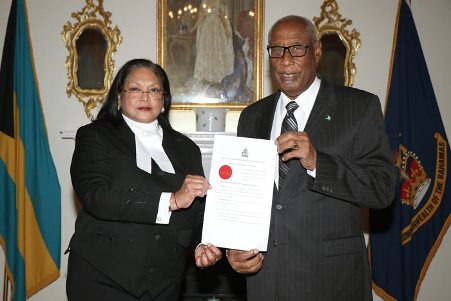 The Leader of the Opposition wrote: 5 August 2020 I learned to my dismay yesterday that Carolita Bethel has been appointed a Justice of Appeal. I had several consultations with the Prime Minister and indicated there is widespread strong and fervent opposition to this appointment with which I concurred.  My party is aware of the objections and the reasons why. They are cogent and should not have been by the Prime Minister . There must be a more open and transparent process which openly examines the fitness of a judge to be appointed to the court. End 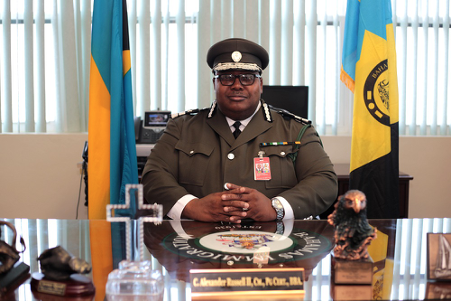 The Director Of Immigration Corrects The Minister 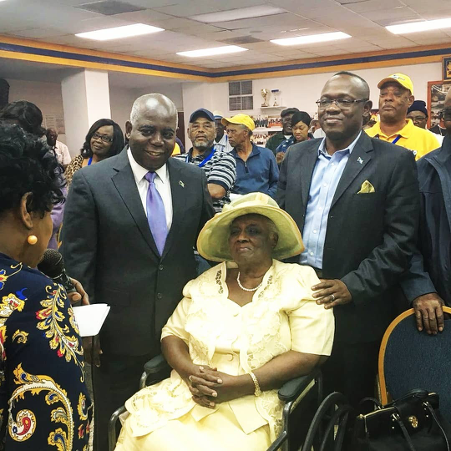 Effie Walkes with Philip Davis, Leader of the PLP and Chester Cooper, Deputy Leader of the PLP. The following statement was issued by the Leader of the Progressive Liberal Party Philip Davis on the passing of Effie Walkes BEM and Stalwart Councilor of the Progressive Liberal Party. 6th August 2020 Today I mourn the passing of Effie Walkes, a freedom fighter and a significant personality in the local struggle for civil rights and social justice. She was ninety-six years old. Blessed with long life and a courageous and fighting spirit, Ms. Walkes was an ardent supporter of the progressive movement 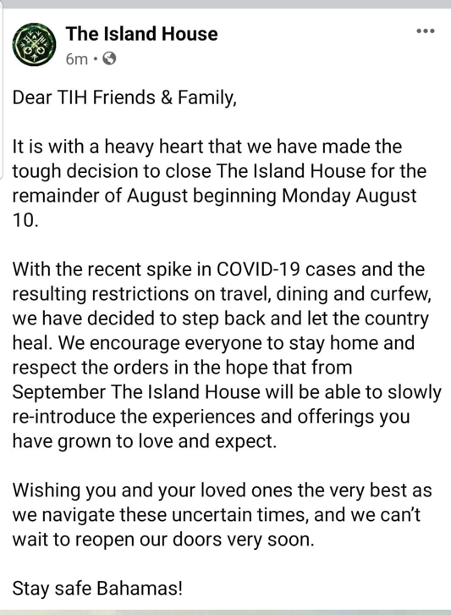 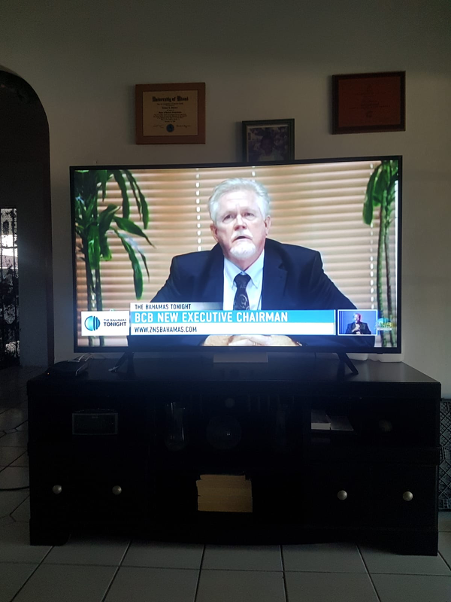 So you know part of the FNM propaganda line against the PLP is that the PLP is a party of old people.  They have some of the PLP’s young people repeating that nonsense.  The  fact is most people who are members of the PLP are under 40 years of age.  They control the party. The PLP keeps pointing out the facts. The age cohort of the leadership of the FNM is no different from the leadership of the PLP. Hubert Minnis graduated from St Augustine’s College one year after Fred Mitchell. Hubert Minnis plans to run again for office, seeking 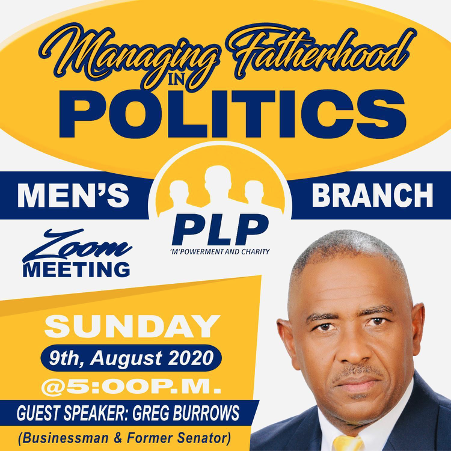 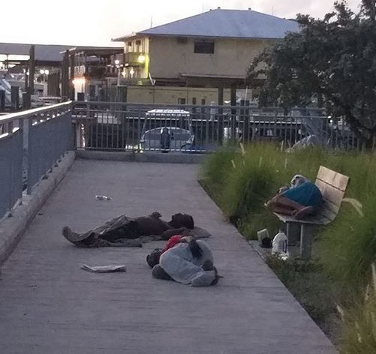 (Editor’s note: So we publish today something from Fred Mitchell Minute By Minute on Facebook, done by Mr. Mitchell himself during his morning run showing the state of homelessness in the pandemic under Hubert Minnis. The FNM trolls were but misusing the comment column on the post to print nasty stuff about Mr. Mitchell. The usual last refuge of scoundrels.  Get personal.  One of them John Lewis said Mr. Mitchell  should grow up.  Mr. Mitchell deleted  all the negative posts and blocked them.  A message appears warning FNMs not to use the platform to post negative stuff or they will 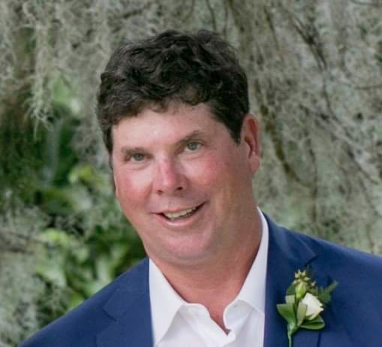 U S Ambassador Designate Promises To Fight China In The Bahamas

William Douglas, the grandson of the founder of now defunct Pan American airways, Juan Trippe, and a frequent visitor and donor to causes in Eleuthera appeared before the U S Senate  on 6 August 2020.  He was there to say what he would do as U S Ambassador.  This time it appears that unlike the previous Trump designee, he did not run into rough water.  He knows the country The Bahamas and  was well briefed.  He kept it short and his statement did not contain any obvious gaffes. The last one that was nominated claimed that The Bahamas  was a 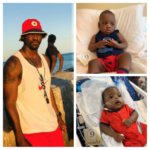 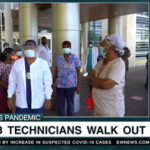 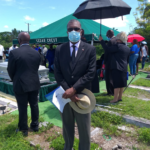 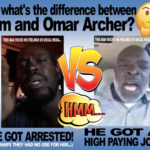 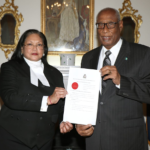