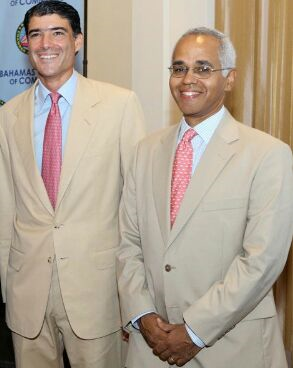 The picture of the Bobbsey Twins in the same suit we show again.  This time it’s to make the point that Dionysio D’Aguilar is the dummy to Sarkis Ismerlian’s ventriloquist.  What a shame.

The latest talk around town is that Mr. D’Aguilar who depends on poor black people in the ghettos of New Providence to wash their clothes in his laundries wants to replace Richard Lightbourn the FNM MP who wants to tie the tubes of Black women.

Mr. D’Aguilar is a real motor mouth.  Never saw a microphone that he could pass up.  He should start to pass them by.  He talks more stupidity and fool than anyone in this country. It is embarrassing how foolish his words are.

He has something to say on everything and everything he says always seems designed to grab headlines or in these latest interventions seem like put up jobs for Sarkis Ismerlian who dare not open his mouth or he might get put out of the country.  So Mr. D’Aguilar does the dirty work.

The latest is on 2nd September reacting to the news that the Government has settled the matter of Bahamar pay outs for Bahamian employees and lessees and contractors.  He had to say something negative.

What a whole lot of codswallop.   Sad for whom.  Could only be sad for him.  The language is racist.  This has nothing to do with Chinese.  This has everything to do with the fact that his friend and buddy Sarkis Ismerlian couldn’t complete the project.  The developer didn’t pay his bills, so the loan went into default.  He has lost the project.  Got away from him.

Both Mr. Ismerlian and Mr. D’Aguilar need to get over it. And if they don’t get over it then go to hell.