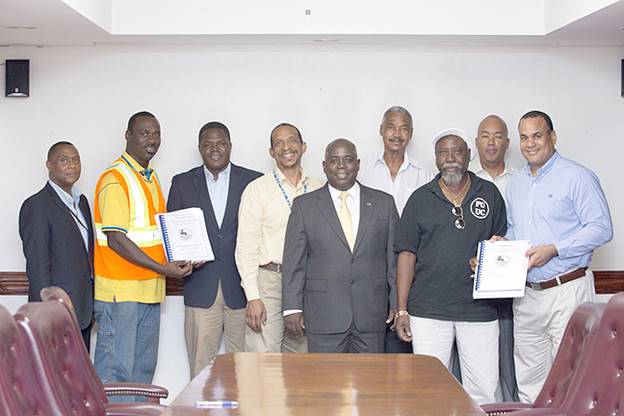 Deputy Prime Minister and Minister of Public Works & Urban Development, the Honourable Philip ‘Brave’ Davis, who was present at the signing, emphasised his “Government’s commitment to expand and improve water supply to communities in need, not only in New Providence but also in the Family Islands, as evidenced by the recent announcement of the $41Million water supply improvement project being partially financed by the Caribbean Development Bank, which will also address potable water needs in Cat Island, Crooked Island, Eleuthera, Long Island, San Salvador, and South Andros.”

Member of Parliament, the Honourable Leslie Miller, who was recently appointed as Chairman of the Water and Sewerage Corporation, also indicated that “these communities have suffered from a lack of potable water since their development, and the Government is extremely pleased to bring this relief.” Mr. Miller also expressed his excitement at being able to continue his contribution to the advancement of infrastructure in the country for all Bahamians.

The combined work includes about 12 miles of water mains and over 600 service laterals.

Additional, work to be executed outside of the contracts includes well-testing, PR related activities to encourage all residents to quickly connect to the new system, and work required to condemn existing private wells where the groundwater is contaminated. All told, over $6.5 Million will be invested in both projects.

Both companies received the contracts through competitive public tenders, and are experienced contractors in the sector. The principles, Mr. Gregory Miller (Apex) and Mr. James Rolle (Proline), expressed their appreciation and enthusiasm to get the work completed in the shortest possible time.

Members of Parliament, and Ministers of State, the Honourable Khaalis Rolle and Michael Halkitis, also expressed their gratitude for the projects which will directly benefit the residents of their respective constituencies