A MINISTER OF FOREIGN AFFAIRS OUT IN THE GALAXY 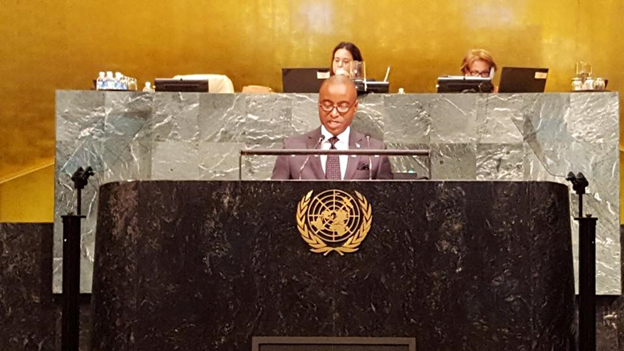 Last week when The Bahamas was called upon to vote in support of a resolution that would have decried the sabotage of the two state solution in the Middle East by a decision made by the United States, The Bahamas punted and abstained.  It was an act of moral cowardice.  It was made in the face of a threat first by the United States President Donald Trump, he is very special, and his Ambassador to the UN Halley Barbar.  They both said that the United States would take the names of those who voted for the resolution and would cut off aid to those who did so.

That fell over like lead balloon.  In the end 128 countries voted to support the resolution, 9 voted to oppose it including the United States and Israel, their fascist government ally in the Middle East, and 35 including The Bahamas ducked out by abstaining.  St Lucia and St Kitts were even more ingenious. They didn’t show up for the vote.

The PLP when asked their position about the resolution, the PLP’s spokesman on Foreign Affairs Fred Mitchell issued the following statement:

The Government speaks for the country on foreign policy matters so there must be something within their peculiar knowledge that led them to vote as they did. The PLP tries to avoid division beyond our borders in foreign policy. Some observers argue that is difficult, however, philosophically to reconcile the principle of the two state solution and the larger UN Peace Process for the Middle East which we say we support and our actual vote. Whatever the position is, however, the PLP believes that foreign policy requires the public to be properly briefed on our positions once taken. In this case, the Government ought to have provided a written statement called “an explanation of vote” to say why we took the course we did.

When asked by the press of The Bahamas for the reasons why, here is what the intrepid Darren Henfield, the Minister of Foreign Affairs had to say in part:

We abstained because we think it is a country’s sovereign right to put their embassies or missions in any country that will receive them,” Henfield said when contacted.

“So we didn’t see any need for The Bahamas to interfere in the United States’ choice or decision to put its embassy in Jerusalem.

“Now that having been said, we’ve always wanted to see a peaceful resolution in the conflict between Israel and Palestine. We have always believed that a two-state solution is the peaceful solution.

“The declaration, the resolution yesterday does not prohibit the continuing of talk toward a peaceful end.

“We believe that it is a sovereign right for a country to put its embassy wherever it wishes, as long as the receiving state agrees to have it.”

Then he added this:

“The Bahamas is a sovereign country. We will not be bullied.

How come we don’t believe him?  The FNM’s decision is simply craven.  They are cowards.  They do not have the courage of their convictions.

If you examine the Minister’s statement, you will see that it is simply a bunch of nonsensical words strung together and he has no idea what he is talking about.

Yes you can put your embassy where you wish, if the receiving state allows it but that receiving state has to have the legal right to do so.  Clearly, The Bahamas cannot for example give the right to put an embassy in Miami because that is not Bahamas territory.  The same with Israel.  Jerusalem is not their territory undisputed. The world says that the Israelis are illegally occupying part of the city of Jerusalem, that part which the Palestinians call their capital.  International agreements that the US signed on to, say that nothing should happen to recognise that as a capital city until the final agreements on the two states is done. The United States has violated those agreements.  So Mr. Minister you are speaking nonsense.

Why not confess that this weak craven government of the FNM have a simple foreign policy and that is to vote whatever way the US says to vote?  Why did you not have the courage of your convictions and vote “no” so you could have been invited to Mrs. Halley’s party for those who joined them in their perfidy?

We know why and that’s because you know that in nations like The Bahamas you would have been eaten alive for siding with an oppressive regime like the Israeli government that treats the Palestinians like the South Africans treated the black under apartheid.

So you hid your light under a bushel and took the cowardly run by abstaining.

Shame on you all.  You couldn’t join France, China, the United Kingdom and Barbados for God’s sake and simply voted the right way and vote yes.  You were so cowardly you couldn’t vote the way your heart really wanted to and that is with the US and vote no.  You took the chicken run.