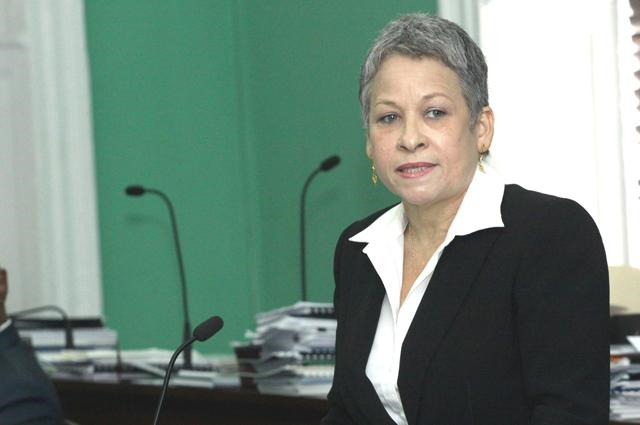 The following is a statement by Glenys Hanna Martin, cialis generic the Minister of Transport, on the illegal strike by air traffic controllers at the Lynden Pindling International Airport on Saturday 10 September.  These nut jobs should be ashamed of themselves and should be dismissed forthwith:

STATEMENT FROM THE MINISTER OF TRANSPORT AND AVIATION
THE HON. GLENYS HANNA-MARTIN ON THE AIR TRAFFIC CONTROLLERS

It is with great regret that I inform the people of The Bahamas that air traffic controllers this morning refused for at least 2 hours to report to duty as a result of industrial action taken by BATCU.

The dispute arises from concerns by the Union about a Security protocol that is executed by the Airport Authority mandating security screening of all personnel accessing the secured airside of LPIA, of which the Air Traffic Controllers were recently included.

The inclusion of the screening of air traffic controllers is a direct mandate by the International Civil Aviation Organization which advised the Government of its imminent intent to post globally that this specific deficiency made LPIA a vulnerable aerodrome as it relates to security and noting that such action would seriously and negatively impact the economy and reputation of The Bahamas. These concerns were also documented by the United States Transportation Security Administration.

As a consequence air traffic controllers are now screened through security along with all other personnel accessing the secure airside except on duty law enforcement officers.

I personally undertook to the President this morning to cause for a meeting on Monday to discuss these concerns, however, the President was non-responsive and it was not until sometime later that the Union agreed to report for duty. I should advise that the Union advised in that meeting that if the outcome of Monday’s meeting was not to its satisfaction similar damaging action will again be taken.

During this unjustified industrial action national and international commercial air traffic to The Bahamas was negatively impacted for more than 2 hours.
The following airlines were impacted:

Delta Airlines                4 flights scheduled today; on average all flights delayed 3hours
All flights are primarily full and ninety percent of the passengers are expected to miss connections.

As a result of BATCU’s industrial action, there were two cancellations to the scheduled morning flights. I am advised that on average, the remaining morning flights are delayed between 2 – 4 hours.  Delta Airlines will be the only Carrier that is expected to experience delays in the afternoon. Delta, American and Jet Blue have indicated that there were large numbers of missed connections.
I  am advised that the impact on domestic carriers  is as follows:

I wish to assure the Bahamian people that the government will not compromise on securing LPIA in accordance with international standards and in our own  national interest and I am calling on the Union to be responsible and proportionate in its actions so as to not cause undue harm to the Bahamian people.