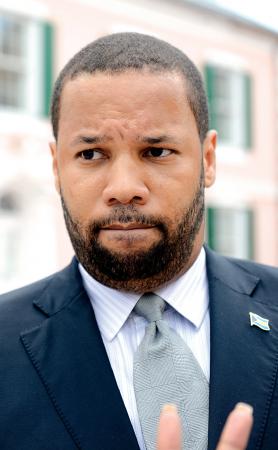 viagra usa times;”>(Is he spending his nights and days at Hubert Ingraham’s House, the master’s feet?)

Before the ink was dry on the referendum result, André Rollins was posting wildly on Facebook to say that the PLP was suppressing the results. Not so.  The Parliamentary Commissioner of his own volition decided that he would wait until all results were in before releasing them.  Bad decision but  his decision and nothing to do with the government.  Mr. Rollins shoot from the hip style again, within the ready ears of a suspicious public.  Again such an act would make no sense since it was clear that the vote had gone down in defeat so what suppression was taking place.  Next up, he was calling for the Prime Minister Perry Christie to resign.  It was all the Prime Minister’s fault, Mr. Rollins claimed. But Mr. Rollins took no responsibility for the fact that he voted for it in the House  and when voting and he specifically said he voted not necessarily because he believed in the bills but he wanted the public get  an opportunity to have their say.  Now he washes his hands like Pontius Pilot and says it was Christie’s fault.  He and Hubert Minnis deserve each other, weak and feckless and wishy washy.  One thing though is ambition burns in the breast of Andre Rollins and he is at it every second of the day hatching, scheming and plotting, this makes him a good Bahamian politician in these times.  His two statements are below:

The PLP government’s role in suppressing the release of tonight’s referendum results is repugnant to any democrat. I expect that Prime Minister Christie, who railed against public speculation that the PLP government would sell economic visas to wealthy Chinese investors to improve its chances of winning the next general election, would express an equal degree of contempt for the apparent collusion between the PLP’s Chairman and the Parliamentary Registration Department in preventing the full release of today’s election returns. It is evident that the PLP Chairman is trying to minimize coverage and commentary of the referendum results in tomorrow’s newspapers, thereby leaving it until Thursday’s papers, where the focus will shift to coverage of the budget debate that begins tomorrow. This PLP Government is once again proving that they are not above playing POLITRICKS with our democracy.

Statement on the Outcome of the Gender Equality Referendum

The public is entitled to receive – during the course of the impending budget debate – a complete accounting for the expenditures related to the ‘Vote Yes’ campaign and an admission by the nation’s chief that the PLP – with its history of hypocritically opposing these same questions in the 2002 referendum and its recent failure to respect the results of the gaming referendum – was the wrong party to put these questions to the Bahamian people. Furthermore, it is unacceptable for the government to reportedly spend $6 million on these last two failed referendum exercises, without holding the prime minister and his cabinet directly responsible and accountable for their overwhelming failures.

It is unheard of, and likely unprecedented, in any democratic nation for the head of the executive branch to suffer two national referendum defeats in a single term in office and not voluntarily offer his or her resignation, or be made to resign by a vote of no confidence initiated by his or her peers. The message delivered by the Bahamian people is pellucidly clear: the Prime Minister has lost his mandate to lead this country. Mr. Christie ought to resign forthwith or be made to face a vote of no confidence initiated in the House of Assembly by both PLP and FNM members of parliament.