Andrew Burrows At ZNS Is Pissed Off 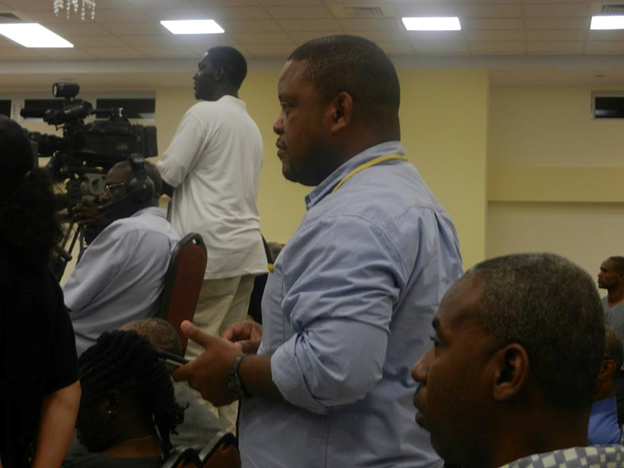 He is the  Director of News at the Broadcasting Corporation of The Bahamas.  His name is Andrew Burrows.  He has an interesting perspective on how the hurricane and the relief efforts were seen by people on the ground and believes that some people can’t get above their prejudices.  This comment was posted on his Facebook page:

I’ve just returned from Long Island with my team of four. While there is a lot of inspiration in seeing a devastated people pull together with the help of their neighbours both on the island and from other islands as well as the diaspora, I could not help noticing the confusion, anger and frustration that appears to be building as a result of misinformation, bad politics and ignorance.

Word spreads quickly when there is no outside communication. Often, that can include incorrect messages and inaccurate reports. That is how the nation was in fear that 30+ lives were lost when the truth is zero. That is why Long Islanders genuinely believe ZNS did not report on the storm or “lied”. Up and down I heard the same thing yet not one single person could tell me what it was we “lied” about and nearly everyone heard our reporting and overnight coverage when the storm was upon them. I know disasters can bring out some confused emotions but imagine hearing in one breathe, a woman in Buckley’s row me saying “You were talking about everyone else and not Long Island” and then asks me my name and I say “Andrew Burrows” and she says “So you found out your brother Albert Burrows safe?” I had to ask her, how did you know Albert was my brother if you weren’t listening to me talk about Long Island and praying everyone was well when a call came in from another lady with family on Long Island but no idea of their wellbeing? You would have heard me say the same thing the rest of our team were saying and that is communications with the island has been lost. Silence.

I saw the video that went viral. I was sad for the lady. I called Long Island Loretta Butler-Turner and I appealed to her to help take people away from this notion that ZNS doesn’t care or we didn’t report. She said she couldn’t understand why people would say that because she heard us too. She knew that the first interviews for her and Archdeacon Keith Cartwright came after she gave him my number and he and I spoke with them on Saturday following their flyover. She knew that I gave them to an editor to make the story. She would know that I allowed a 9:30 minute story on the air put together by an editor who admitted she had no script and did it from her head.

I FLIPPING CARE and if I didn’t, I wouldn’t have gone there not knowing what to expect. I took my team of four with just the bags on our backs and our gear. We had no idea what to expect, but we were prepared to stay long enough to get some true insight.
We met an amazing couple, the Rodgers. Merrill and his wife. They became our guides and they took us up and down Queen’s Highway between Deadman’s Cay and Clarence Town. All in the South and not enough but we were appreciative nonetheless. We didn’t get up to the north but the stories got to us while we were on the ground.

I also care enough to know that Long Island is more than just the South. Johnny Knowles, Lia Head-Rigby and the crew from Head Knowles are doing a tremendous job on the island but the reality is, it’s all concentrated in the South. There are people in need who are not getting the kind of help that the south is getting they too are devastated. If Long Islanders allow the north to suffer worse, then that will be the real tragedy of this episode.

We interviewed Emile Knowles. He lost a lot in the storm. His livelihood is seriously at risk. But imagine as he is telling his story, a lady is off to the side, lives in Nassau. I know her well but she pretended not to know me. Her late father was a writer and openly opposed to this government. Imagine her trying to egg Emile on to turn his concerns political. To his credit, he didn’t go too deep because that kind of bullshit has no place here. We are Bahamians. Not PLPs or FNMs. Joaquin could care less about that and in this crisis, neither should any of us. The lies we heard about what happened on Saturday past with Perry Christie were annoying and offensive. But that’s what’s happening in the absence of communication and reason.

There is greed on the ground too. The folks who have are taking more than their share and they know it. But then there is hope. Lots of it. To see Long Islanders from Nassau jump on boats and planes and come in with supplies and the muscle to help rebuild is amazingly inspiring. Long Islanders are MY people. That is where my family comes from and we are a proud, independent minded people. But we need each other and we need help. Homes are completely decimated. Waterside, almost every single house is affected, many completely destroyed. They will have to rebuild, however long that lasts. Many do not have insurance. It will have to come from somewhere.

Let’s hope when it does come, however it comes, it’s shared equally and not just with one section of the island. You won’t find that concern on the other islands that were hit just as hard or harder. Every military personnel we spoke to said the same thing. Spirits were high, people are rebuilding their lives. That’s a start. Let’s hope we can come out of this where the opportunists can hold their desires to capitalize on a tragedy back and help their fellow man rebound. This is not the time or place for that.

PrevPreviousWoman’s Accommodation; Michael Pintard Interferes
NextThe BTC Gets Us Back In BusinessNext