ARE THESE FOLKS TRYING TO BLOCK CARL BETHEL 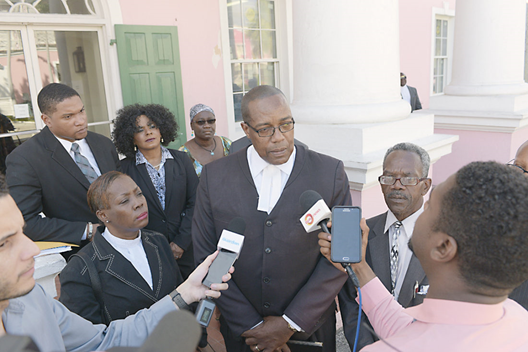 The picture in the Nassau Guardian shows some attorneys who answered the call of Magistrate Derrance Rolle to mobilize against the Prime Minister for not appointing a permanent chief justice. They appointed Sir Hartman Longley as the President of the Court of Appeal so he vacated the post of Chief Justice but instead of appointing Stephen Isaacs as the Chief Justice they gave him an acting appointment.  The Prime Minister has remained silent in the face of the protest except to say that the Prime Minister consulted with the Leader of the Opposition before taking that decision. There we go again, blaming the PLP. When is this man going to take responsibility for his own governance?  Let us be clear, consultation or not, the Prime Minister makes the appointment.  The lawyers say that the reason they are protesting is that an acting appointment undermines the independence of the judiciary.  They are taking line from protests in Jamaica on the subject which successfully caused the government there to swear their acting Chief Justice in substantively. No such luck here.  The Attorney General Carl Bethel says that he thinks there is no problem at all.  The talk around town is that Mr. Minnis is trying to persuade Mr. Bethel himself to be the Chief Justice that’s the sticking point.  The Bar Council is leading the fight. Here is what the Guardian reported that the lawyers had to say.

Several show up to judicial protest
Attorney Keith Seymour addresses the media yesterday outside of The Supreme Court. TORRELL GLINTON

A handful of lawyers and magistrates yesterday had a brief meeting in the Supreme Court in protest of the government’s failure to name a substantive chief justice.

Last week, Senior Magistrate Derence Rolle-Davis called on members of the judiciary to abandon their posts yesterday and assemble in front of the Supreme Court in protest.

Attorney Keith Seymour, one of several attorneys who assembled outside court yesterday, said the government must address this issue.

“We don’t believe that, based on the constitution, that someone should be acting in a capacity as chief justice for any amount of time,” he said.

“Certainly the Bar [Association] president did write to the officials to have that corrected – to have a substantive person in that position.

“We have no problem with Justice Stephen Isaacs being the chief justice but we would like for somebody, him or anybody else, appointed to the substantive position of chief justice.”

Attorney Murrio Ducille said Isaacs has the touch of the common man, integrity, a hunger for knowledge and would make an excellent chief justice.

Attorney Maria Daxon said she believes that the government intends to “bring somebody who never worked in public service before”.

“It is totally unfair to Mr. Isaacs to have worked 30-plus years in this judiciary department and for somebody who did not to come in and take over that post as chief justice,” she said.

“We are asking this government to look at this in a fair manner.”

Last week, Bahamas Bar Association (BBA) President Kahlil Parker wrote to Attorney General Carl Bethel expressing alarm that no one has yet been named to the substantive post of chief justice.

“Continued deferment in this matter has a compounding deleterious effect on the perception of the independence of our judiciary and, thereby, the rule of law.”

Bethel has said that he would address the matter on Monday, but never did.

“We do not have the concerns that have been expressed,” he said.

“We think that our not having those concerns is founded on good legal authority. I will leave it at that for the moment.”