Bishop Savages The Government at the Synod 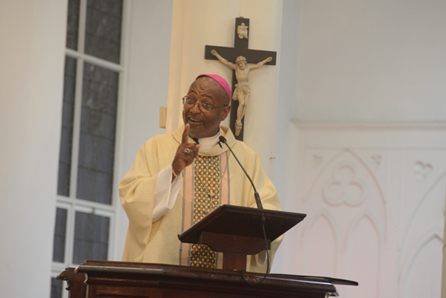 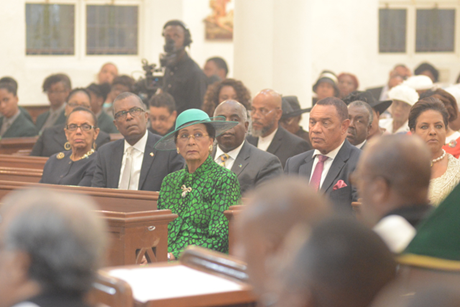 Photos by Peter Ramsay of the Bahamas Information Services

It was like a political rally, the annual Synod of the Anglican Church where the Bishop Laish Boyd gave a charge to the congregation assembled for their week’s convocation.  It was a rally talk, punctuated by applause as if he were speaking to the PLP’s Convention and he was its leader.  This was done in church and in the face of the Governor General, the Prime Minister and some of his Cabinet ministers.  Just didn’t sit well.

What was also interesting was the exchange of warm and fraternal greetings by Ranford Patterson, President of the Bahamas Christian Council. It appears that the Bishop and he are fast friends.   Mr. Patterson, an arch critic of the PLP, was invited to say a few words of greeting before the sermon.  Reading the tea leaves was interesting.

Family planning is a legitimate public policy issue but it is always tackled from the wrong end.  People think that the decision is made by these young women to have children is an economic one.  In fact no decision is made in the way we normally understand that term.  They don’t even think consciously of it.  Open their legs to all who may come, and if pregnancy happens, the view of the society is you just deal with it.  So the culture has to change so that it does become a conscious decision. choices.    In the meantime, you cannot defend insensitive comments.  The Bishop should be the last person to do so.

The Independent Electoral Commission.  The idea while a fancy idea like the Freedom of Information Act, it is also not a good one either.  There is no such thing.  The British have a commission for example which is supposed to do just that but everyone knows that the way the Commission rules, the Conservatives end up having an edge in England.  The other thing is just mechanical.  After the rejection of every attempt to amend the constitution in this country, no government is going to fool with trying to amend the constitution.  We also know that the church is not a reliable partner in constitutional reform The Bishop’s friend Ranford Patterson is a clear example of someone who is manifestly unreliable.

On Majority Rule, the analysis the Bishop is incorrect.  The PLP has been struggling to find a way to make it a state run enterprise.  But one hand can’t clap.  What is important though is for the PLP to move ahead even if the others won’t come along.  The PLP passed the Majority Rule Holliday, making it a state event.  The act was signed by Sir Arthur Foulkes just before he demitted office.  In the Anglican Church the Priest Canon Sebastian Campbell has led the way in seeking to make it a balanced and national event.  He and the others have been struggling on their own to make precisely the point the Bishop makes.  The Bishop did not even mention Fr. Campbell in his address.

The other thing is the Bishop made it seem that there is equal blame on this from a race point of view.  Majority Rule was a racial event. That too should not be denied as the Bishop sought to do.  It was Black people coming into their rights.  Let’s not rewrite history and soft soap this.  Further, it is still the whites who refuse to accept it.  If they don’t, that should not stop the PLP from going ahead until others catch up.  We think that there is no equivalence in this matter between what the PLP had done and what the FNM has done.  The FNM is in denial on the point.

Those are just some of the contentious issues in the statement.  You can click here for the full statement.