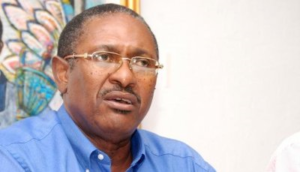 D’ Aguilar Off To terrible start as a Politician

It is unfortunate that the first public action taken by Dionisio D’ Aguilar as an announced candidate for membership in the House of Assembly is failing to recognize that when there is a conflict between his role as a politician and that of his former role as a director of Baha Mar and surrogate for Sarkis Izmirlian he must not be confused – he must place his national role first.

The failure referred to was as follows:

The PLP made the assertion that the Leader of the FNM, discount viagra Dr. Hubert Minnis, cialis canada had sold the soul of the FNM to one new Boss Man.

D’ Aguilar response is to assert that the Chairman of the PLP is over his head on Baha Mar’.

This is very sad for several reasons:

1. Implicit in the charge is the suggestion that somehow he and the new Boss Man of the FNM are exceptionally smart and were certainly not over their heads when they served as Directors of Baha Mar.

And they maybe. That is not the business of the PLP. What is the business of the PLP is that despite all of this brilliance or lack thereof this now politician and his new political Boss Man somehow managed to lead the Company to default on a mortgage of over 2.5 billion dollars and in the process do serious damage to the national interest of the Bahamas.

2. Additionally, despite their brilliance or lack thereof they somehow failed to do what ordinary people do – when signing a construction contract — that is they failed to secure an appropriate performance bond and again in the process they did serious damage to the national interest of the Bahamas.

3. The FNM candidate goes on to say that his political Boss Man had invested one (1) billion dollars in the venture of Baha Mar.
Again, that may be true. At this stage, that is not the business of the Bahamian people and thus the PLP.

At this stage two things are relevant

Firstly, the FNM candidate, as a former director of Baha Mar will likely have plenty of time to prove it to the liquidators who would no doubt have an interest in a full understanding as to how all funds were spent.

Secondly ,this is important because it is established that the government gave concessions valued at over 1 billion dollars and the China Ex- Import Bank extended a loan over 2.5 billion dollars, that makes $3.5 billion

One billion more would make $ 4.5 billion. Independent studies suggest that what is on the ground is certainly not worth 4.5 billion dollars.

4. The FNM candidate says that his political Boss Man made a genuine offer, but has no one to negotiate with.

Once again, that may be true. But to the extent that it is true surely any individual who is not over his head would ask the question as to why.

The answer is obvious. The candidate’s Political Boss Man had managed to shatter the confidence of many persons with whom he had entered into agreements. This list did not begin with the Chinese. It began with a world class bank – Scotia, continued with a world class gaming company –Harrods and the list is long.

5. The FNM candidate goes on to instruct the government to get over the Chapter 11 snub.

This is where the question of an overt conflict of interest becomes front and center. In fact it goes further because it gives rise to the question as to whether this was the basis upon which the soul of the FNM was sold — that somehow an FNM government would forgive and forget the damage which was done to the national interest of the Baha Mar when a certain course of action was taken in the US Courts.

This instruction to the government gives rise for the PLP to assert its view that no government should deal with any attempt to destroy the national interest on the basis that when that effort fails the government must do no more than get over it.

I remind all of the bitter disappointment of thousands of Bahamians and others who were constantly assured that Baha Mar was on schedule and within budget, even to the extent of been 97% complete. It begs the real question as to who was ‘in over his head’?