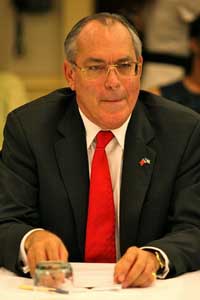 On Tuesday 9th February, Brent Symonette, the former Deputy Prime Minister under the Free National Movement said that we have to stop playing the race card in our politics.  He was responding to the comment by Tennyson Wells, the former FNM Minister, who said that he believed that Richard Lightbourn, the now sitting FNM MP for Montagu, was a racist.  Mr. Symonette wants us to move past all of that.  Of course, we have always contrasted his views with that of Sir Durward Knowles, the Olympic medalist, who  apologized on four occasions to Black people in The Bahamas for the treatment they received by Whites in this country.  Mr. Symonette will have none of that.  He wants us to move past it.  He claims that the voters have moved passed it.  Trouble is that is still the fault line in the FNM and it still exists in our country, though largely unstated in the continued disequilibrium between Black and White in the country.  Mr. Symonette went to a segregated school as a boy.  St Andrew’s School was created to keep Black people out.  It was only desegregated in 1968.  There needs to be a frank discussion on race in the country.  Mr. Symonette can be a part of it, he would confess his sins, and God is faithful and just. He claims he did not know where Tennyson Wells got his information from.  This shows how lost in space politically and socially Mr. Symonette is.  Here is what he told The Tribune in his own words:

“It [the race talk] has to stop. There is no space in our political arena for comments like that, as you know, the FNM is made up of a wide range of Bahamian men and women who are dedicated to moving the country forward. We have to stop bringing race into it.

“It baffles me that people still think this way despite years of progress and development in this country. We are beyond all of this, the voters have shown that they are beyond it, so the politicians should do likewise and campaign on skill and ability and not race.

“My passport says Bahamian, that is all that matters. I know that when people read or hear these comments they are going to say, ‘that’s Brent Symonette talking like that because he is a white Bahamian.’ I expect that, but I also expect a large percentage of Bahamians to look at the people vying for political office and say, ‘I want the best person for the office, it doesn’t matter if they are black, white, green, yellow or red.’

“It is 2016, we have interracial marriages, we have blacks and whites mixing throughout our culture. I am not attempting to sidestep or hide the days in this country where racism was an issue, all I am saying is that we as people have done so much to move away from that and it is unnecessary for politicians to use that card, that act, that tactic to divide our people…

“I am a white Bahamian, I served under a black Bahamian – at no point did we operate as such. We always operated as a group of Bahamians dedicated to improving our society. That is the FNM way; that is what the FNM I knew was built on. This nonsense Tennyson Wells is speaking about, I have no idea where that is coming from.”