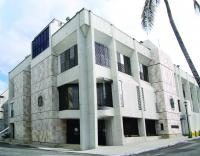 Central Bank of The Bahamas

The Central Bank of The Bahamas will unveil architectural designs for the construction of a new bank and concept plans for a rejuvenated City of Nassau in two weeks. The submission of these designs by a team of highly regarded Bahamian architects will launch a juried competition with local and international judges and a People’s Choice voting competition. Bahamians will have a direct say in reimagining their city. The five days of online voting in the People’s Choice competition will take place between April 16-20 at nassaureimagined.com and the Central Bank’s Facebook page, under the theme “Our City, Our Bank, Our Choice”. Bahamians will select their choice for a new Central Bank building and a Nassau urban plan, featuring open green spaces, walking paths, architectural art pieces, and modern accommodations for government services. The People’s Choice selection will automatically receive bonus points when the panel of local and international judges makes a final determination of the overall winner. The overall winner will win a cash prize and may be awarded the contract to develop the construction documents for the new facility. During April, the Central Bank’s campaign will include public education about the Bank and its various community initiatives and the project. “The offices of the Central Bank sprawl across many different buildings, spanning several streets in Downtown Nassau. We want to bring everyone under one roof, while celebrating the City of Nassau and the Bahamian people. It is simply time to construct a new building and rejuvenate the areas around the bank. So, we’re collaborating with neighboring stakeholders to reimagine our corporate home and the City of Nassau.,” said Ian Fernander, Manager, Administration, at the Central Bank.
“As a bank, we have always been engaged in our community and supportive of our culture. We are especially proud of arts program, where we empower emerging artists and maintain a sizeable collection of Bahamian art, and the Balcony House Museum project. We are going to move quickly on the construction of the new bank and we know this architectural monument will be another source of motivation and drive as the Government brings the broader Nassau urban plan to life,” said Mr. Fernander.
Nassau Reimagined fits into a massive public and private effort to completely rejuvenate all aspects of Nassau: its cultural preservation, physical infrastructure, safety, sanitation, local government, community development and many more issues. The complementary efforts are being spearheaded by various independent but interconnected groups, including: Creative Nassau; the Over the Hill Community Development Partnership (OTHCD) and its Southern Recreational Grounds Restoration; the Nassau Urban Lab, a product of the National Development Plan; and the Sustainable Nassau Action Plan, an Inter-American Development Bank (IDB) sponsored project. Efforts also include the Downtown Nassau Partnership (DNP) and the Antiquities, Monuments and Museums Corporation, which both sit on the steering committee of the Central Bank’s Nassau Reimagined project. Among locations under consideration for moving the Central Bank are the former Royal Victoria site and the site of the existing main Post Office Building. The urban plan will reimagine those areas and all of the nearby regions heading towards the Prince George Wharf. The southern borderline of the project is the Bain and Grants Town Project Area, which falls under the Over the Hill revitalization efforts. “The stature and importance of the Bank demand that the new building not only satisfies a set of functional needs but also reflects the histories and tells the stories of Bahamian people, reminding Bahamians of our capabilities. Symbolically, this mirrors the success story of the Bank itself and the renown financial services sector in The Bahamas, which has been marking important milestones since the early 1900s,” said Mr. Fernander. -END- For More Information: Kevin A. Demeritte External Relations
kademeritte@centralbankbahamas.com (242) 301-2710 or (242) 302-2600