COLLEGE OF BAHAMAS PRESIDENT AT THE OAS 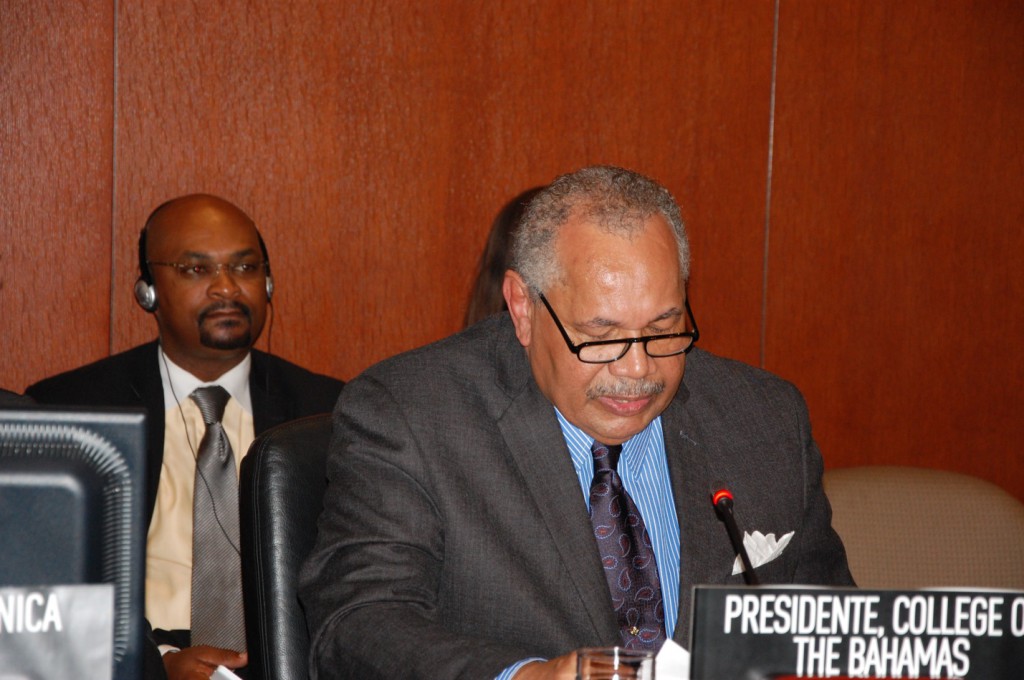 Addressing members of the CIDI at their regular meeting at the OAS on Tuesday, November 10, Dr. Smith said the University of The Bahamas will partner with the Bahamas Ministry of Education “to ensure that teacher training, as prioritized in the agenda being developed, features prominently in the discussions at the 2017 Ministerial Meeting and that engagement on the challenges and opportunities in the provision of tertiary education in the Caribbean and Latin America receive focused attention.”

“We anticipate, going forward, that even greater balance will be given to the OAS considerations of the higher education circumstances of the English-speaking Caribbean,” Dr. Smith said.

Dr. Smith noted that earlier this year he was invited by the Government of the Republic of Panama to attend the first ever Forum of University Presidents of the Americas at the VII Summit of the Americas.

“At this Forum of 450 University Presidents from North, Central and South America and the Caribbean, I made a presentation as a member of a panel of Presidents consisting of the University of Panama, University of Havana, College of The Bahamas, Georgetown University and the University of Mexico,” Dr. Smith recalled. “During the second day of the Summit, representing the College and the nation, I also signed an OAS Cooperative Agreement, opening the door for students and faculty at the College to engage in study and teaching opportunities at other colleges and universities within other member OAS countries.”

Referring to his two-day visit to D.C. with a delegation from COB for a series of meetings related to COB’s transition to a university, Dr. Smith said, “This week, my colleagues and I, with the most gracious assistance of the hard-working team from the Embassy of the Commonwealth of The Bahamas, made significant progress toward maximizing the benefits of this cooperative agreement for all Bahamians, everywhere. I wish to especially thank His Excellency, Ambassador Rahming, and Ambassador Newry, Deputy Chief of Mission Chet Neymour and especially Deputy Consul and Representative Michael Bullard of The Bahamas Embassy.”

The COB President added, “I would also wish to thank the OAS for its investment in my education and subsequently, my country.  I served as one of the first OAS Fellows of the OAS when I was supported in my studies for the doctorate of Education degree at Harvard University.  My research focused on Re-Centralization and Decentralization of Education Bureaucracies in the English-Speaking developing countries of the Caribbean.

“Currently, the College has partnered with the Government of The Bahamas in securing a Transition Project loan through the Caribbean Development Bank.  Faculty members at the College have partnered with the Government in creating a national development plan.  This plan will help to guide the expansion of academic programming at the new University of The Bahamas.  In addition, we have established a Government and Public Policy Institute that promises to become a vital resource for the Caribbean and surrounding regions.   I mention these for several reasons.  First, because this is the first national development plan the country is undertaking.  Second, because the new University will utilize the Institute to help in the implementation of the plan by producing annual National Key Performance Indicators.  Finally, via the Institute, respective Government Ministries will be encouraged to maintain Research and Development line items for research and innovation.”

Dr. Smith declared, however, that are some realities that cannot be ignored, noting that ‘”unlike most countries in the Caribbean region, The Bahamas is an archipelagic state.”

“The country consists of 700 islands and 2,400 cays within an area of 5,358 sq. miles,” he explained.  “There are just over 365,000 Bahamians spread across 28 inhabited islands. The majority of the population, however, roughly 70% have migrated to and live on the island of New Providence in the capital city of Nassau.  This island’s land mass is only 80 square miles. Needless to say, this island is plagued with the same challenges of any major industrialized city; including migration from other Caribbean countries.”

Continuing, he added, “This geophysical archipelagic environment proves to be a major challenge towards developing and servicing the needs of the country. In addition to being faced with having to duplicate infrastructure on varying scales on all these islands, we find that the entire country tends to be ranked internationally as if each of the islands were economically the same.  With over 6 million tourists visiting the country each year, coupled with significant foreign investments in private homes, the average family income tends to be skewed; thus affecting the calculated per capita income for the country, resulting in being ranked as a high income country.

“This high income ranking create disadvantages to seeking financial assistance through development grants and other sources of funding that could greatly improve the standard of living throughout the country; including access to higher education.  Our best option for improving the standard of living for all inhabitants of the country is to increase access to higher education for all.

“However, it will require that international development agencies undertake the task of studying and redefining development characteristics of archipelagic nations.  In our global society today, we respect and accept cultural differences; yet we neglect the fact that countries ranked similarly do not have the same economic and geophysical characteristics.  For instance, just one of the 28 inhabited islands in The Bahamas has the same land mass as the entire island nation of Trinidad.  Friends, it is an injustice to rank a country that has to multiply its infrastructures continuously in order to meet the needs of its citizens with countries that need do so one time only.  With 28 airports, 13 of which are international airports that must meet FAA standards, and duplication of government and other public services some 30 times over, the Bahamas cannot afford the luxury of being treated as just another country; especially, the luxury of being ranked as high-income.”

In order to grow a university that “will be sustainable,” Dr. Smith said COB will need “significant technical support and funding assistance from regional and international institutions and agencies.”

“In particular, we will need assistance by way of expertise from established institutions and agencies supportive of higher education, like the OAS and the IIE,” Dr. Smith said. “We will need your support in helping others to appreciate our differences.”

He added, “For cohesive, but diverse higher education that will have a strong impact on development in the region, we must begin to partner with each other. We are excited about receiving your faculty and students as we seek to send faculty and students to other OAS member institutions. This diversity will strengthen higher education in the region and it will drive innovation specific to the development of island nations with differing challenges. It is important to drive home the point that more educated people at the tertiary level in our countries will help to improve innovation and development throughout the entire region.”

“Therefore the Government has been one of our number one supporters of the programme, specifically in terms of providing scholarships and the Teacher Education grant,” Dr. Smith said. “The School of Education at the College of The Bahamas has seen its programmes grow considerably, due to this support.”

Continuing, the COB President added, “The Ministry of Education has indicated that a new teacher struggles most in the first year of being in the classroom. While our student teachers excel at their teaching practice experience, the actual transition to the classroom, from the theoretical to the practical, is often difficult. The reality of moving from the classroom at the College to vastly different environments requires considerable adjustment in most cases.

“This is particularly evident when you consider that The Bahamas is an archipelago. Quite a number of new teachers will be deployed to far-flung islands, like Acklins and Mayaguana, whose classrooms bear little resemblance to those in the capital. Class size will be considerably smaller, access to technology and reliable internet services will be greatly diminished and teacher support will also be less. To remedy this, we need to introduce structured, mandatory mentorship programmes that will help new teachers to have a more seamless transition.”

Dr. Smith noted that increased access to technology “will also greatly improve our teacher education programmes and our school experience in the classroom,” adding that  the Ministry of Education already has several schools which are part of a pilot programme using technology provided by Promethean.

“With increased access to technology, we can undergo considerable growth in the School of Education, particularly in the area of online education and support,” Dr. Smith predicted. “Our archipelagic nature means that we must find innovative ways to access those throughout the country and teach those teachers who cannot relocate to Nassau to enroll in university.”

Pointing out that COB’s School of Education has graduated 680 teachers in the last five years, Dr. Smith said, however, that only 86 of them have been males.

“Our classroom spaces are becoming increasingly feminized, which leaves our young male students without ample male role models in the school environment,” the COB President said. “This is particularly challenging when you consider the number of students, male and female, coming from single parent homes in The Bahamas. To address this phenomenon, I believe that we must institute teacher cadet programmes for male students only and give male students particular incentives to interest them in becoming teachers.”

Declaring that these were some of his “thoughts regarding some of the challenges we face as an archipelagic nation which has only 365,000 Bahamians, with 70% of the population on one small island, Dr. Smith said, “On 28 inhabited islands, spread across an area exceeding the size of the Eastern Caribbean archipelago, we have severe economic disparities. These disparities are further compounded after natural disasters, like Hurricane Juaquin; creating increased migration toward the one small overly inhabited island, New Providence. Yet, this small archipelagic country is ranked, internationally, as high income.”

He added, “Friends, given the size of the population, there should not be one poor or uneducated Bahamian. This small but significant country has the potential to serve as a case-study and a role model for developmental success.”

CAPTION
COB President Dr. Rodney Smith addressing members of the OAS Inter-American Council for Integral Development (CIDI) at their regular meeting at the OAS on Tuesday, November 10. Seated behind him is Mr. Chet Neymour, Deputy Chief of Mission, Embassy of The Bahamas.