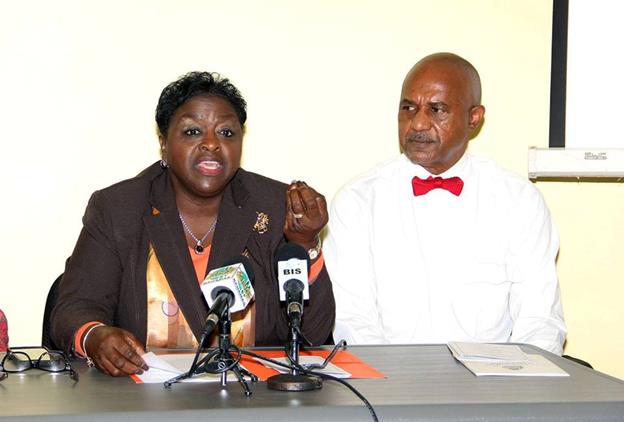 viagra canada times;”> NASSAU, Bahamas (BIS) — Unified involvement is going to be required if The Bahamas is to successfully honour its obligations to the eradication of gender-based violence, particularly against women with disabilities.

A World Health Organization (WHO) report indicates that emotional, physical and sexual abuse of women with disabilities “is a problem of crisis proportions,” persons attending a one-day workshop on Gender-Based Violence and Persons with Disabilities heard Thursday, December 10.

Recommendation 18 of the United Nations Committee on the Elimination of Discrimination against Women (CEDAW), meanwhile, stressed that women with disabilities may be subject to double discrimination on account of gender and disability and are considered a vulnerable group.

Mrs. Griffin said it was against this backdrop that the Ministry and a number of its units joined forces with local non-governmental groups in order to develop a way forward that would eventually lead to the further implementation of additional strategies to reduce gender-based violence within The Commonwealth of The Bahamas.

(Recommendations coming out of the workshop will be added to the national action plan for the way forward with regards to ending gender-based violence.)

Hosted by the National Commission for Persons with Disabilities and the National Task Force on Gender-Based Violence, the workshop also ended 16 days of activism directed at the eradication of gender-based violence internationally and locally and which began November 25, observed annually as the International Day for the Elimination of Violence Against Women.

Thursday’s workshop also gave local human rights and disability and other groups the opportunity to follow through on United Nations Secretary-General Ban Ki-Moon’s admonition to “recommit to guaranteeing the fundamental freedoms and protecting the human rights for all” on a day observed globally as Human Rights Day.

“In this context, our focus on gender-based violence and persons with disabilities is indeed very relevant and timely,” Minister Griffin said. “Solving the problem of gender-based violence against Persons with Disabilities will require the involvement of all segments of our society, including disability-related NGOs; religious and service organizations; law enforcement and legal defence organisations; the healthcare system as well as safe houses.

“Unified involvement is required if we are to successfully honour the obligations made by our country in adding our signature to CEDAW and our determined commitment to the eradication of every barrier necessary for the total elimination of this horrific problem of gender-based violence.,” Minister Griffin said.

She added, “As we are all aware, legislation can correct most of the inequalities and injustices that mar the daily lives of individuals with disabilities. However, we must be cognizant of the fact that no matter how precisely drafted the legislation, one of the greatest barriers that persons with disabilities will ever face is the negative attitude perpetuated on them by society.

“Educational opportunities such as this workshop are extremely important tools in the eventual eradication of these destructive attitudinal barriers as well as the total enjoyment of a life totally free from all forms of violence.”

CAPTION
Minister of Social Services and Community Development the Hon. Melanie Sharon Griffin brings remarks during a one-day workshop on Gender-Based Violence and Persons with Disabilities Thursday, December 10. Seated next to the Minister is Mr. DeCosta Bethel, Chairman of the National Commission for Persons with Disabilities. (BIS photo/Letisha Henderson)