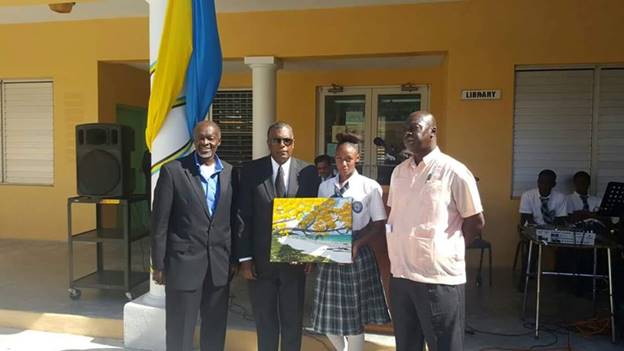 I want to thank Headmaster James Clarke and Coach Kevin Spence for all the hard work they have done to make that possible. I was able to watch them play and to speak with them up in Freeport and I am pleased at the results.

I had a chance to speak with the boys after their losing effort in Freeport. We were sure they could do it after pulling out a rabbit from the hat the day before and winning the game in the last seconds. But as I told them on another occasion, life is up and down, over and out. The singer says but each time you find yourself flat on your face, you just pick yourself up and get back in the race.

Today we mark Commonwealth Day. We are part of the Commonwealth, some 53 countries, most of whom were former British colonies and who today espouse a certain set of values of tolerance, the rule of law, democracy and human rights. Today’s theme is an inclusive Commonwealth. Today I would like to speak about the rights of women.

On the 3rd March, I issued the following is a statement:

On behalf of the people of Fox Hill, I was pleased today to cast a vote for the four constitutional amendment bills in the affirmative, and to support the rights of women to equality in our country.

I am asking all the people of the Fox Hill constituency to vote yes when the proposition is put to the electorate later this year.

I will support its passage by my own yes vote.

I dedicate this vote to my late mother Lilla Mitchell who was in every way equal to my father and held our family together through thick and thin. I can think of no finer tribute to her.

I also recall all the many women who run our institutions and are the engines of our country and particularly those in Fox Hill. My own party branch is run by women. Many churches in Fox Hill are headed by women and certainly without the support of women our institutions would be in serious trouble. Neither the church nor the state can be run effectively without them and they should not be second class citizens in our land.

To the women in our country: in 2012 there were 15,000 more women on the electoral register than men. This means that in this referendum, women have the power to ensure the passage of these acts by their sheer numbers alone.

I thank all my Parliamentary and Cabinet colleagues and those who headed the Constitutional Commission for all their work in advancing the cause of freedom and equality in our country.

I will do all I can to support it.

I wish to solicit your support for the yes vote and particularly those who are women and girls in this audience.

Women got the right to vote in my lifetime. Before 1962, women could not vote. I remember my mother casting her first vote in 1962.

Today no one thinks that is unusual.

But we need to do one more thing. The rights that men have in the constitution do not apply to women. We have an opportunity to change that and we should.

I want all of you young girls, the girls’ basketball team, women, the female teachers, the mothers and daughters and sisters everywhere to know, I will be voting to give you equal rights in our Bahamas.

People will try and confuse the issue but that is all the amendments seek to do.

There are 15,000 more women than men on the election register. So even without the votes of men, women can pass this by themselves if they stick together. I hope they do.

Women run everything in our country: the home, the school, the government and the church. The constitution should reflect that reality.

My mother carried our family when my father lost his job in 1970, just as I was going into College. He did not work for three years. She kept the family together with her one income. I want to do this for her. She was equal in every way and I would do her a disservice if I voted no.

One Saturday I went to seven funerals between the hours of 10 a.m. and one p. m. and in the church every role except the preacher was a role executed by a woman. There is nothing that should be denied women.

So today as we think about the theme of inclusiveness, let us remember the women today and let us commit to doing something to make them more equal in our law.

I want to congratulate a woman – Baroness Patricia Scotland – who I worked so tirelessly to get elected as the first female Secretary General of the Commonwealth. Again, I say let’s do it for the women, for our mothers, our daughters and our sisters and our aunts and grandmothers.

I wish to thank outgoing Secretary General Kamalesh Sharma for his service over the last ten years and I wish him well as he hands the baton to Baroness Scotland.

Thank you and God bless.

PHOTO CAPTION
Minister of Foreign Affairs and Immigration and the member for Fox Hill the Hon. Fred Mitchell is pictured receiving a gift from Doris Johnson Sr. High School presented by student Kendira Lewis. Mitchell addressed the student body during a special assembly to commemorate Commonwealth Day. To the Minister’s left is school principal James Clarke and to the far right is Stephen Sands, Vice Principal.