COMMUNICATION BY THE PM ON BAHAMAR 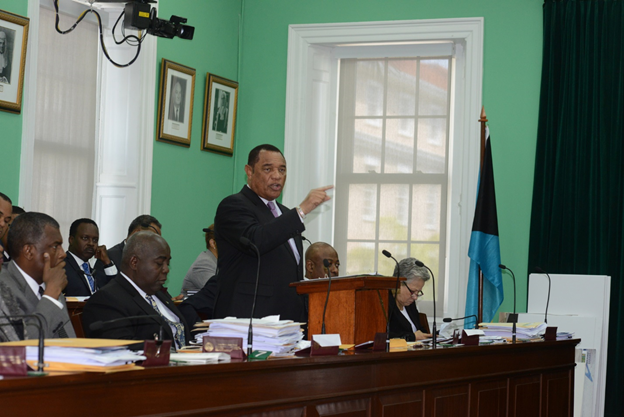 Mr Speaker,
I wish to table for the record a public statement that I made on 22nd August,
2016 announcing arrangements for remobilization, completion and opening of
the Baha Mar resort.
When Mr Sarkis Izmirlian decided to have the Baha Mar companies, suddenly
filed for Chapter 11 Bankruptcy in Delaware, without the knowledge of the
Government and people of The Bahamas or its partners China Export Import
Bank (“the Bank”) and China Construction America (“CCA”), they owed tens
of millions of dollars to Bahamian creditors. The Government’s expert
advisors advised then that Baha Mar’s Chapter 11 filings revealed that these
Bahamian creditors had little or no prospect of being paid anything in
Delaware.
During more than 20 months of complex and arduous negotiations, my
Government and I were focused on achieving three things:-

Firstly, ensuring the re-mobilization of the property such that
construction would be resumed as quickly as possible. We are pleased
therefore that the casino and casino hotel, the convention centre and
its hotel, and the golf course, are slated to open before the end of the
2016-2017 winter season.
Secondly, ensuring that the property is ultimately purchased and
operated by a world-class operator ;
And thirdly, to ensure the payment of claims to Bahamian creditors and
contractors, who previously had little or no prospect of recovering
anything from Baha Mar.
Under the Heads of Terms of the Agreement signed last week, on August
22nd, 2016, re-mobilization was to begin immediately: this is already
underway.
The Bank further committed to fund all remaining construction costs to
complete the Project. Construction is expected to re-commence in
September, next month
We are especially pleased that the Agreement also provides that the
thousands of former Bahamian employees of Baha Mar will receive the
following outstanding amounts due to them: unpaid salaries, severance pay,
accrued vacation pay, and notice payments due to termination. Sums
deducted from employees and former employees’ salaries and pension
contributions will also be repaid.

Other Bahamian creditors and contractors will receive a significant part, and
possibly ALL of the value of their claims. Many of the same people and same
companies who were previously contracted will be re-engaged to complete
the Project. We expect that Bahamians holding commercial leases and
concessions will continue to hold them.
And, the Government of The Bahamas and the Bahamian utility companies,
such as BPL, will receive payment for some of their outstanding claims
against the Baha Mar companies.

Mr. Speaker,
I am happy to announce that a Committee, to be Chaired by His Excellency
James Smith, has been established to process the claims of all of the
Creditors. I am advised that they will make announcements imminently on
how creditors may communicate with them and how they will process claims.
We expect that the thousands of former employees of BahaMar will be paid
by the end of September 2016 and that other creditor matters will be
concluded on or by 31st December 2016.

Much has been made of the fact that the arrangements are currently under
Seal in the Supreme Court of The Bahamas. The Application to have the
documents sealed was made by the China Export-Import Bank.
This kind of Seal is standard, especially in transactions of this complexity,
scale and international market-sensitivity. Remember, the Bank already has
billions, BILLIONS, of dollars, invested in this Project.
The Bank is negotiating the sale of the property. We have made it clear that
casino, convention centre and their respective hotels must be operated by
world class specialists who must either have equity in the Project or make
significant capital contributions to the Project.
Putting the documents under Seal enables the Bank to finalise these
sensitive negotiations with the normal business confidences that one would
expect. Despite the wishes of some, it is simply unrealistic to expect global
businesses to conduct their negotiations in the media.

Mr. Speaker,
This is not unprecedented as I have said, very normal. The Court approved
the sealing of the documents to help the parties secure the best outcome for
the property, and the Court will lift the Seal if and when when it deems it right
to do so.

Additionally, the suggestion that the Government has provided unusual
concessions to conclude this deal are not true.
Most countries provide concessions to attract and encorage investment.
Trade Agreements contemplate concessions. Our laws provide for
concessions – to all investors.

My advisors instruct me to be cautious about what I say given the Court
Order. I can say that CCA was given Hotel Encouragement Act concessions
(for construction) by the FNM and will be given the same concessions (to
complete construction) by my Government.
I can also say that Governments of The Bahamas are constrained by the
Atlantis agreement in what they can offer any hotel and casino development.
The concessions that will be offered to a new developer cannot exceed those
given to Atlantis.

Mr Speaker,
My career has been in service of the Bahamian people. I thank those who
were affected by Baha Mar and who spontaneously on 22nd August, with less
than one hour’s notice were prepared to join me in making that significant
announcement and among other things, acknowledged my Government’s
commitment to Bahamians, that they trusted my Government to arrive at an
outcome in the best interest of Bahamians.

Mr. Speaker,
I have no doubt that History and the Bahamian people will judge us kindly.

Mr Speaker,
We are a proud, strong and fiercely independent nation. It is this very
strength that allows us to enter with confidence into agreements with investors
from around the world.
In recent years, our relationship with China has strengthened because of our
mutual interests. While they look for global opportunities in which to invest, we
look for international investors to support our national development.

Mr. Speaker,
during many years of public service, we have before had to deal with
developers who have run into problems. I have had the privilege of being able
to learn from the successes and some of mistakes of past administrations.
We know from experience that it is not Government by soundbite that counts,
but a willingness to put in the hours, to do the hard work, to bring people
together and above all, to produce the best outcome for Bahamians.

Mr. Speaker,
after the long days and nights of these negotiations, I remain eternally grateful
to my colleagues and members of staff who have worked around the clock
and across time zones to achieve this excellent result.

Mr. Speaker,
I say again today, what I said to the country last week:
This outcome is good for The Bahamas and great for Bahamians.
God Bless the Commonwealth of The Bahamas.