Diana Swann Of ZNS Fired By The FNM 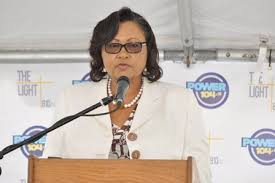 It was the new Prime Minister Hubert Minnis of the people’s time government who said that if you do your job, you have nothing to fear when he came to ZNS to speak to the staff. That was a lie. Last week, the Broadcasting Corporation of The Bahamas gave Diana Swann her walking papers. She is no longer the General Manager. Ms. Swan had this to say by letter to the staff on 28 June in response:
“You would have now received information that I am no longer employed at ZNS.

“The Government was not willing to renew my contract nor honour the new contract issued to me by the former Administration. Nonetheless, I am in high spirits.

“My record speaks for itself:

– During my tenure at ZNS, staff members received increments, salary increases, promotions based on their performance, more than ever before.

– A new 300 ft. HD Television Transmitter was installed at the Harold Pond Transmitter and extensive renovations completed at the Transmitter site which saw the implementation of FREE TO AIR

– Extensive renovations at the Corporation’s headquarters, this includes hurricane windows the installation of a new AC Unit for the entire building approval granted for a new Unit in Freeport, which remains on-going. Repairs to the transmitter site in Freeport

– Spearheaded the submission of numerous television programs, which have won regional recognition by the Caribbean Broadcasting Union (CBU) for consecutive years and a first for the Corporation. This proved that our staff members are on par with their regional counterparts.

– The completion of the ZNS app for smart cell phones.

– The purchase of updated equipment, which was long overdue.

The list goes on far beyond those listed above.

“The security of staff and ZNS took on a new direction. Some will agree that the clubs formed social events fostered staff interaction and boosted staff morale at the Corporation despite what some may say.

“One of the first staff members to be assisted upon assuming office is Ms. Beverly Curry, host of the television program, ‘Ordinary People’. Many more staff members were assisted with job-related and personal issues, they all know who they are.

“There were decisions made for the betterment of staff and the Corporation, though some would say otherwise.

“Productivity and accountability were enforced. Young men at the Corporation finally began to dress professionally and radio and television anchors began to make an effort to enhance their appearance.

“I have been accused of much but those who know me, know the truth from the lies.

“Thank you for working with me, those who did. I enjoyed the camaraderie and the great times we had.

“I FORGOT TO ADD The Vehicles I purchased…7 up to the time I left…out of that 7 ……3 ARE BRAND NEW VEHICLES..FROM THE USA.

“May God continue to bless and keep you…”