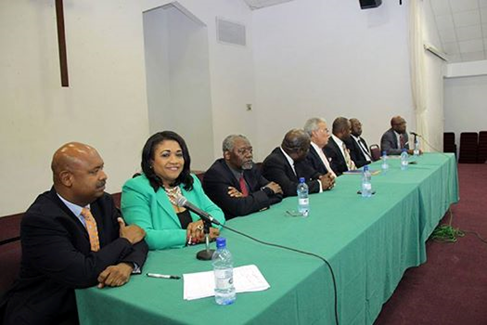 cialis canada prostate times;”> NASSAU, BAHAMAS, Oct. 19, 2015 (BIS) – Foreign Service officials — including Heads of Mission, Honorary Consuls and other officials — enlightened high school students about the role of The Bahamas’ Foreign Policy during a speaking tour at Holy Trinity Activities Centre, Monday, October 19.
The speaking tour is one of the activities organized by the Ministry of Foreign Affairs and Immigration (MOFA) for its second annual Diplomatic Week, being held October 18-24, which serves as a forum to strengthen and deepen bilateral and multilateral relations with some 70 countries. The week also provides an effective arena to extend The Bahamas’ campaign for election to the United Nations’ Human Rights Council and re-election to the International Maritime Organization.

Dr. Rahming provided a summary of the functions of the United Nations and the OAS. He said the UN comprises 193 independent countries and is concerned with climate change, economic development, ending poverty, famine and diseases. Almost any problem that affects mankind, wherever they are, the United Nations is concerned and involved in reducing or eliminating that.

“Each country has an ambassador assigned to the UN to represent, to speak on behalf of and to vote on behalf of the interests of their respective countries,” Dr. Rahming said.

Noting that a group of diplomatic officers is assigned to the New York office, Dr. Rahming added, “They go to the UN every day along with their counterparts to debate a wide variety of issues. We discuss The Bahamas’ position on it, refer it to the MOFA and they tell us how to vote on it. You have to bury your personal views and espouse the views of the policymakers, and they are at Cabinet and the Ministry of Foreign Affairs.”

Ambassador Rahming described the OAS in Washington as a “mini-United Nations” that has similar primary goals and responsibilities which concern human rights, democracy and economic development as related to countries in the Western Hemisphere only.

Godfrey Rolle said his role as The Bahamas’ Ambassador to Haiti focuses specifically on migration, and his colleagues are expected to represent the interests of the Government and people of The Bahamas.

Consul General Carroll emphasized that the role of consuls general and members of the diplomatic corps is not to have a good time and live it up abroad as many Bahamians believe, but to promote all aspects of the interests of The Bahamas. His specific role, he said, is to promote trade, industry and tourism and encourage foreign investment.

A question and answer period followed the discussion.