DOES BRENT SYMONETTE KNOW WHAT HE IS DOING? 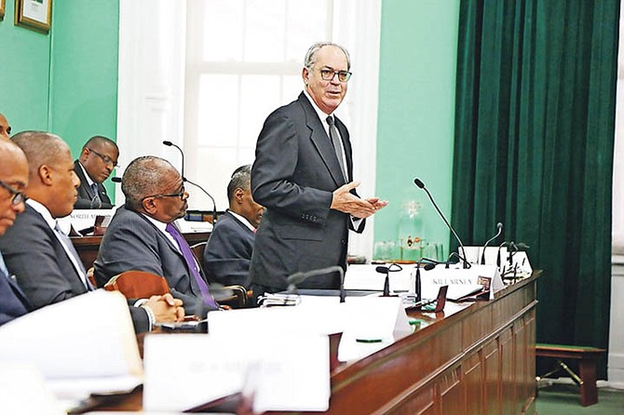 The Minister for Immigration Brent Symonette was busy as the devil in the House of Assembly as he spoked in the interminable and wasteful midyear budget debate. He announced that there are going to be changes to the immigration act that will give people who were born in The Bahamas and missed the application deadline for citizenship of their 19th birthday as provided in the constitution  a new status. It would give them it appears a right to permanent residence with the right to work.

You have to ask yourself if these people know what they are doing or are they simply hopelessly incompetent.

For the moment we choose the latter. If these folks would simply check, the law now allows the Government to grant permanent residence with the right to work to anyone who applies. There is no requirement of residence for any period of time.  That’s the first thing.

Secondly, the law now allows the Government to give citizenship to anyone who has lived here for at least seven years, provided that they have lived here within one year of the date of their application. So right now if the person misses the deadline and lived here all their lives, then the Government can grant citizenship right now and falling that can give them permanent residence with the right to work

So what the heck is it that they need to waste the time of Parliament doing that for?

You just have to sigh at the patent stupidity of these people.

But then there may be method to the madness.  They and Fred Smith, the rogue, lawyer who helped to pay for their election to office, was in the newspaper praising them to high heavens because they like the jackasses they are, have decided that they are going to take all people who land here to court and find them guilty so that they can deport them.   How stupid.

He has them tied up in knots and are refusing to prosecute the case that this man Smith has brought with dispatch.

What the comment of praise from him did was to indicate that there is an incestuous relationship between Fred Smith and the FNM.  They are afraid of him. The incursion of these people must be deterred.  The PLP must take a stand against.

So the method to the madness is this.   They are working at the behest for Fred Smith now, even though they are pretending to the Bahamian people that they are working on their behalf.  They are watering down the sovereignty of this country and allowing the place to be swamped by a migrant group with different values which can only swamp our national will.

Brent Symonette could not be a worse pick for Minister for Immigration.  He believes in nothing except money.

In his other job as Financial Services minister he has proven to be a failure.  The country has been blacklisted. The Government is scrambling round like a chicken without its head.  They have announced that they are going to introduce corporate tax in The Bahamas. Here we go.  Just lie down flat and walk on us.

James Smith, the former Minister, has cautioned that we have to be careful how we jump when these people coming knocking on our door.

But you see you have to believe in The Bahamas fundamentally in order to stand up. Brent Symonette.  Believes in money not The Bahamas.

Apologies for the stats server is down this week.