EXCITEMENT IN FOX HILL AT THE BRANCH MEETING 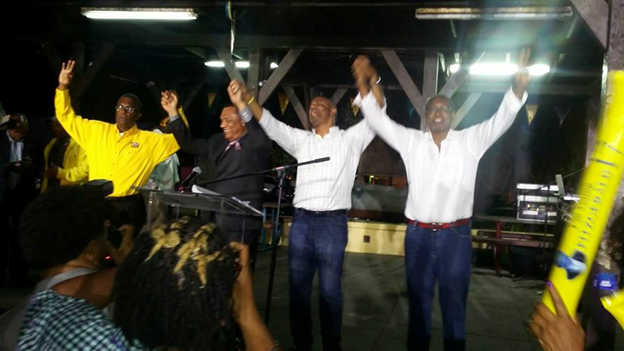 The Fox Hill PLP hosted the branches of Marathon and St Anne’s at a public branch meeting on Monday 27th February.  It was a hell of a time as PLPs showed up to support their candidates.  Fred Mitchell MP spoke and said the following:

The last time I spoke to you on a public platform, I told you of the case of Fred Smith Q C and his terrible racist rant in which he said that Black Bahamians hate white people. He said Black Bahamians love the money of white people but hate them and that The Bahamas was a hateful place to live.

He was so embarrassed by this falsehood that he so called apologised and went hiding under a rock.  Now he is back from under his rock, this time talking about a spy bill and misusing photographs to tell untruths about me.

Ladies and gentlemen there is no spy bill except in the imagination of Fred Smith.

But I tell you a story and stick with me here.  It begins with a quote from Shakespeare’s Romeo and Juliet.  Juliet says of Romeo:

What’s in a name? That which we call a rose
by any other name would smell as sweet

So the point is no matter what you call something, it is that same thing.

Remember as we approach Lent that Jesus  told his disciples this in the Bible:
Matthew 21:2
“Go to the village ahead of you,” He told them, “and at once you will find a donkey tied there, with her colt beside her. Untie them and bring them to me.

The disciples went and did as Jesus said and in the Bible it says:

And they brought the ass, and the colt, and put on them their clothes, and they set Jesus thereon.

My point tonight is sometimes you may call it a donkey some time an ass, but by whatever name you call it, even if you call the donkey Fred Smith, it’s still an ass.

And Charles Dickens wrote: the law is an arse.

But since we are still in the middle of carnival, Harry Belafonte used to sing: Jackass will dance and bray let him bray, let him bray.

And one of the friends of Mr. Smith in  the phoney organization that calls itself  the Grand Bahama Human Rights Association  said on a public stage this this minister of foreign affairs is unhinged.  I have a message tonight to that friend.  Stay out of the web shop in Freeport every morning.

In the school yard, when people said that about you, you would tell them ya ma is unhinged.  But I won’t say that tonight since this is a PLP meeting.  It would not be polite to say ya ma is unhinged.  I can hear Melanie Griffin saying now: Now Audley you know that isn’t nice.

It is really time to take off the gloves at these people who run Save the Bays and   the Grand Bahama Human Rights Association.

They have run around the world with narrative that keeps repeating itself and finding its way most recently into the narrative of a human rights report by the United States Government. The U S Human Rights report is completely discredited by adopting uncritically the nonsense that these people from Save The Bays and the Grand Bahama Human Rights Association have been spinning.  Shame on the U.S.

The PLP itself has not been as aggressive as it should be with the evidence that is available which shows that the   money being supplied to Save The Bays by a foundation connected with a rich American expatriate who lives in Lyford Cay is being used for political purposes because he is in a fight with another rich resident in Lyford Cay. This should be exposed but instead nothing while the monies are being used to defeat the government.

We hope that during the election campaign Fred Smith, Joe Darville and all the little possums in that bosom are exposed for what they truly are.