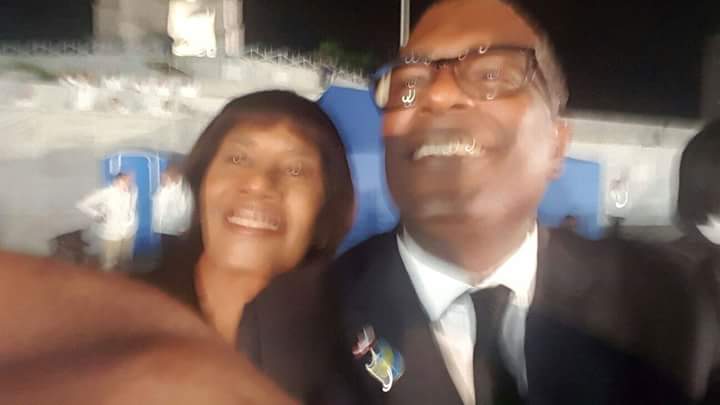 Foreign Minister Fred Mitchell with Portia Simpson Miller, formerly Prime Minister of Jamaica now Leader of the Opposition in Jamaica at the funeral for Fidel Castro in Havana 29 November.

There following statement was issued by Portia Simpson Miller former Prime Minister of Jamaica saying that she is stepping down as party leader in Jamaica:

Comrades, I have been in politics for many years and I have been assessing my future as leader of my beloved People’s National Party.

I have been reflecting on what the past 10 years have meant and mean.

It has been quite a journey.

We have been in Government and in Opposition. In 2012, we had a landslide victory and led a four-year period of some of the most fundamental strides to set the Jamaican economy on the right track.

Now we are back in Opposition by the slimmest margin ever.

What decade it has been!

We have held together through some very stormy seas.

Earlier this year, I signalled to the Party that I wanted to see us through the Local Government Elections.

There was a reason for that.

I never wanted a new leader of this movement to commence their term with an election loss which we expected in the Local Government election.

I wanted to give that person a clean slate on which to build.

I have given over 40 years of selfless and dedicated service to this great Party and country.

I have been through some tough battles for this party. I have witnessed many Comrades fall.

There were times along the way when only a few brave souls were left standing.

The only thing we had was courage but we were fighting for a cause and we were never going to quit on the people.

In you my Comrades, I see the best of humanity – You are resilient and hopeful, caring and strong.

These virtues give me an unshakable faith in the future of the PNP.

With courage and confidence in our ideals, this great party will never tire … never falter … and never fail.

It has been the privilege of a lifetime to serve as your President.

I have been blessed to represent my party and nation.

I am proud of and happy about the strong endorsement given to me by the delegates of the Party in September.

To receive 93% of the votes is indeed an overwhelming endorsement.

However, there comes a time when one must assess their political future.

Today, I am indicating to the Party that I will not offer myself for re-election as President this noble movement for the next political year beginning in September.

I want the transition to a new leader to be seamless.

I will lead the officers to establish clear guidelines and a period for campaigning.

There will be sanctions and a ban on public advertisements.

Any action by candidates and their supporters to tarnish other comrades or bring the party into disrepute will be met with sanctions.

Those who want leadership must remember that the PNP is bigger than all of us.

If we cannot put the party before personal ambitions, we do not deserve to lead this movement.

I will do everything I can in the time I have left as Leader of this Party to lead our reconnection with the Jamaican people and to influence the return to power of the PNP.

Comrades, let us resolve today to do our best to unite the party and build bonds that will never be broken by pettiness and personal ambitions.

I thank you for the prayers that have lifted my spirits.

I thank you for the countless acts of sacrifice, courage, generosity, and grace that I have witnessed especially over the last 10 years.