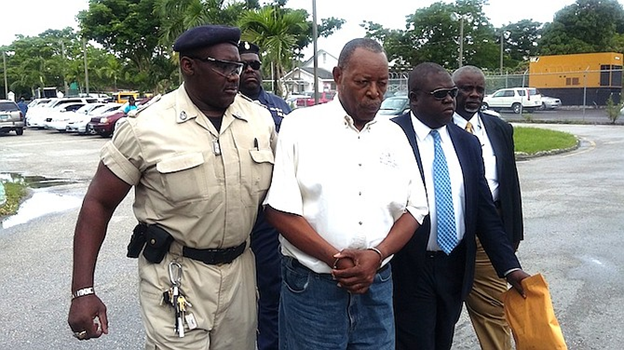 ed times;”>Fred Ramsey as he was taken to arraignment on Friday 2nd October

Freddie Solomon Ramsey, 78, was charged before Chief Magistrate Joyann Ferguson-Pratt on four counts of conspiracy to commit bribery and 14 counts of bribery allegedly committed between 1999 and 2003 on  Friday 2nd October. He was granted 40,000 dollars bail with two sureties and  ordered to return to court on 13th October.  He will be tried in the Magistrate’s Court in Court 13.  The Attorney General Alyson Gibson has been promising that the identity of the alleged bribe taker at BEC would have been revealed.  Now we know.  Bradley Roberts, Chairman of the PLP , reminded the public that he first raised this matter in 2000.  The public now wants to know who got the money that Mr. Ramsey is alleged to have accepted and was it a politician.  The FNM leadership has been silent in the face of the charges.  It is alleged that a French company paid 300,000 US dollars to a BEC Board member to influence contracts to a French company between 1999 and 2003.

Mr. Ramsey is a Meritorious Free National Movement Council member and former parliamentary candidate for Fox Hill. He is also an insurance executive.

According to The Tribune, the Crown  alleges that Mr. Ramsey, being concerned with others, conspired to “solicit, or accept any advantages as an inducement to or reward for or used influence in procuring”, for ABB Generacion and Alstom SA in the New Providence Expansion Phase Two contract with the Bahamas Electricity Corporation.

It is further alleged said The Tribune that Mr. Ramsey, on a dozen occasions during the same period, received $370.395 and 90 cents in bribes from Alstom SA.

Mr. Ramsey pleaded not guilty to all of the charges. Police prosecutor ASP Clifford Daxon offered no objection to bail for the accused.