HOW IS LABOUR DOING? 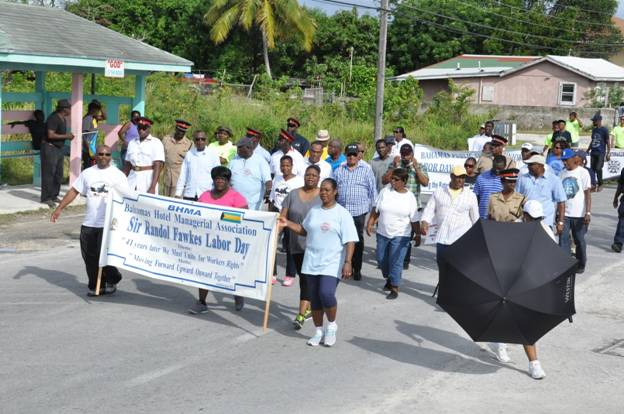 The Free National Movement and its hapless leader Hubert Minnis could not muster a presence on the Labour Day March either in Nassau or Grand Bahama but whenever you can’t be there in person why not issue a press release? Opposition by press release. That will get you elected.  The press release was dishonest at best, if not just better described as a  plain bunch  of damn lies.  The Leader of the FNM claimed that the FNM stands with the workers of the Bahamas and he says that the PLP has only one more labour day before the FNM is returned to power.

That is an interesting set of assertions when the evidence is there that the FNM sold BTC, the telephone company, at a fire sale price and paid no heed to the future of the workers or the quality of the service.  Since BTC changed hands, workers have been fired and  the telephone company’s quality of service has gone down the tubes.  So why would anyone want the FNM back in power if you are a worker?  We don’t think so.

It is the Progressive Liberal Party that stands with the workers of the country.  The PLP  brought out large contingents to both the marches in  Grand Bahama and in  Nassau on 5th June.   Full-fledged delegations, no play- play contingents,  in addition to the comments of the Minister of Labour in support of workers.

The Minister for Immigration Fred Mitchell speaking in  Grand Bahama said that the Department of Immigration wants to work with the industrial sector of Grand Bahama to ensure that the work force is protected for Bahamians.  He said that it appears that many companies in Freeport want the Bahamian worker to apologise for being in Freeport.  He was working to protect Freeport for Bahamians.

Labour Day became a holiday officially in 1961.  The holiday was moved by the late Sir Randol Fawkes in the House of Assembly.  He chose the date the first Friday in June because it was on the 1st and 2nd June 1942 that the workers of the Bahamas united in order to revolt against the unjust wage practices that were being paid that the  construction site of the  now Lynden Pindling International Airport then known as Windsor Field.  It was in honour of those first organized workers that the date was chosen and to mark their sacrifices.

Today there has been much progress  since then.  We have a modern Ministry of Labour with a  Labour Department and a modern conciliation system.

The problem is with most things in The Bahamas is the system is bogged down in bureaucracy and it takes too long and it is too expensive for a labourer to get justice in the country.  The Tribunal is supposed to settle labour matters but it often takes three years or more before your case can be heard.

There are some small measure that the PLP can take now to help change this.  First, they can give conciliators the power to make a finding or recommendation of how to settle a matter. The party who does not accept their recommendation when it comes to the Tribunal will have to pay the costs of the  winning party.

Secondly, there ought to be a rule in place that notwithstanding the trading name of companies, the  company can be sued under that trading name and that you do not have to rely on the actual corporate name in order to succeed.  Too many people sue in the name under which the company trades only to get to court and have it thrown out because they have sued the wrong party.

Finally, it would be helpful if the government would start a system of public advocates for people who simply cannot afford lawyers or who  do not have union representatives who can go in for and on their behalf.

Right now the  workers of Melia, the Cable Beach located hotel, are engaged in a fight over gratuity payments because the company wants, it is alleged, to unilaterally change the gratuity and its formulation to the detriment of the workers.  Courts have been siding with the companies against the workers in these matters.  We continue to be concerned about the people who they are putting on the bench and their anti labour judgments.

The government should seek to provide more pro labour judges on the bench and on the Tribunal.

Working people in this country have a tough time.  The PLP is the best that is available from the point of view of public policy.  But the anti-black, anti-poor bias exists even there, so deeply ingrained in the country is it to fight. The FNM would be the worst thing that could happen for this country again for labour and we do not support them and will fight to be sure that they do not  get there. We want the PLP to win but we also want the PLP to remain true to its roots and  not associate themselves with the Brian Morees of this world. That is not us.

In the end then as we wish the Bahamian people happy Labour Day, we say that old Negro prayer from the United States and adapt it for this purpose with regard to Labour: “Lord,  aint what it ought to be , but thank God it aint what it was.”