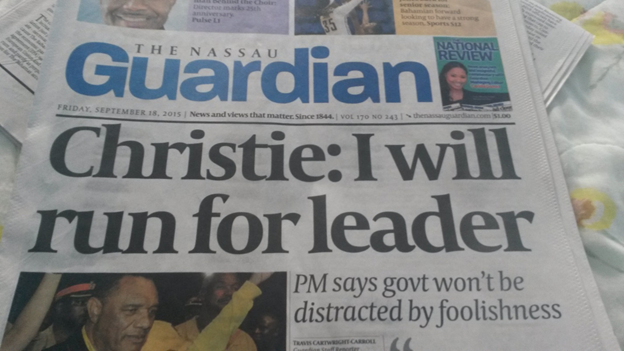 generic viagra hospital times;”>Last week there were a number of curious reactions to the column and this particular paragraph; mainly that we had gone too far:

cialis sale times;”>We are being done a great disservice by this public rowing and we need someone big enough to set the House back in some order.

The PLP has to win this general election.  The enemies of the PLP are vicious. If we lose, we are all sunk.  No jobs for PLPs.  Those who just got them will be fired.  Those who have contracts with the government be terminated.  Those who have been promised land and businesses will all have them cancelled.  That is the cold hard reality of the FNM coming to power. They are vicious and will not blink one second after they take over including moving to ruin the reputation and legacy of the PLP and its incumbent with a vengeance.  Keep fucking around and the PLP will find out the hard way.

This column is PLP.  Not an enemy of the PLP or the Prime Minister. It can only go so far with trying to indicate the warning signs of disaster looming on the present course.

Will some sane person please help?

People wrote back and told us that we went too  far. Who knows, maybe it was squeamishness about the curse word. However don’t see why that’s a problem since it  a word in common everyday English.  Our point in repeating it today is that  things have moved on from there.  The Prime Minister went to North Andros, the land of his father’s birth on Thursday 17th September and where he has sunk some 100 million dollars into an agricultural and marine science project by the acronym BAMSI to say that yes indeed he is going to run for Leader of the PLP.  This was stunning. He had thrown down the gauntlet.  His progenitors had the news published across the universe and it led the headlines in both the three dailies.  The Facebook supporters threatened to kick ass to those who did not fall in line.

Then what next.  The sides began to divide and a not so nice campaign of public relations began with unkind words being said sotto voce and on Facebook and What’s App about people who were friends and family just the day before.  It must stop.  The declaration is fine and good but if the effect is to fracture an already fragile alliance then it is counterproductive.

The prevailing opinion among the party faithful is that the insurgents in the party should step back from the breach and not cause an upset because this will cause the PLP to lose.  The prevailing view from the antagonists is that the status quo cannot obtain and there must be at the very least some plan or discussion about succession.

Succession in politics in the Caribbean is a dirty word.

We have Hubert Ingraham former Bahamian Prime Minister as an example of one who  changed his mind about leaving in an orderly fashion after two terms and then having reneged on his promise was booted out of office twice and  instead of reveling in his retirement, is allegedly plotting and scheming to come back again.

Over the past weeks that we have visited this delicate subject to our peril, we have said the following:

That if it is “not” then a new strategy had to be developed.

We do to not agree with  political subterfuge, assassination or murder

We believe that there ought to be a considered discussion on the subject if the PLP is to be saved.

We believe that one should not get carried away by the ra ra of the crowd,

We believe it should not be a unilateral decision on the way forward.

We believe that the present Leader and Deputy Leader are great assets to the PLP and the country.

Sensible , logical, respectful and all the things the PLP likes to say about these things.

The PLP wants to win again and they the faithful are not sure that by removing the  present leader it gets them any closer to that goal but may  instead leave such fractured feelings that  the whole thing would collapse.  The antagonists argue the same thing: if there is not change then feelings will be fractured and a loss will result.  Looking on with glee is the Leader of the Opposition Hubert Minnis who with enough troubles of his own must be glad to see  the PLP in some sort of discussion to put it mildly.

The Prime Minister’s declaration has started the public discussion.   His troops in the majority of the PLP have galvanized on a war footing. This column has always said that the issue would be difficult and painful.  That harsh words would be said by people who were once friends.   That improper motives will be imputed.  Allegations made.  Charges made and counter charges made. Bitterness and ill feelings.  All part of the process. It must be avoided.

But we end where we began, the PLP cannot afford to lose this general election. All those in this: both protagonist and antagonists should read and inwardly digest and apply themselves to wisdom.