THE SOFT POWDER PUFF SPEAKER ACTS LIKE A CRAZY MAN 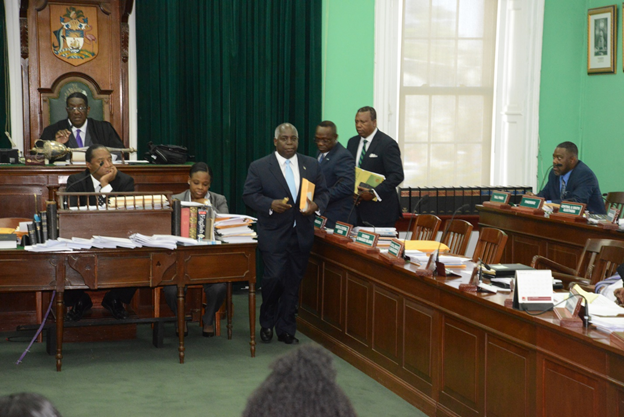 What happened last week was a good week for the Opposition Progressive Liberal Party.  They pushed the FNM with their 35 seat majority into doing something which was disproportionate to the remedy required. They expelled not only Glenys Hanna Martin MP from the House which they had done the week before but expelled all the rest.  So the entire PLP delegation in the House is unrepresented.

This was done by the same Speaker Halson Moultrie who was marching in the streets for transparency and accountability.  What he did was foolish.  The Leader of the Opposition called him a buffoon.  That is a mild word to what he should be called.  Senator Fred Mitchell speaking at the Oppositions rally in Nassau Village on Thursday 8 February called him a jackass.

That was a vote of confidence and fine as far as it goes but there is a wider issue.

The Speaker used words like “ soft” and “ powder puff”; “ pervert” and reprobate” to describe Mr. Mitchell.  These are homophobic slurs. So while the community at large was quick to defend against the unwarranted attacks on Mr. Tynes who was maligned in his professional capacity as Clerk of The House; Mrs. Hanna Martin for the injustice done to her in the suspension; the disrespect shown to Mr. Davis and his wife; there was silence on the very personal attack on the man who heads the party and who was personally attacked in a way that sought to damage his personal reputation.  He was accused of deviant and criminal behaviour and of being morally unacceptable and done so from the protection of the Chair of the Speaker of the House for which there is no adequate redress.  It is as if it is acceptable to say those things one and more particularly it is acceptable to say them about Mr. Mitchell.

There is nothing on record that would support those assertions. Certainly no objective evidence.

Candia Dames, the Guardian’s Managing Editor, repeated the words of the Speaker on her Facebook page as if quoting them with authority.  This is yet another sign of why she is unethical as Managing Editor of the Nassau Guardian.  If a similar thing had been said about a woman, what was it called, “slut shaming”, Ms. Dames would have been up in arms. Indeed, she claimed to join in condemning the Speaker for his comments about the Leader’s wife.

The Human Rights Champion Fred Smith joined in the homophobia by printing a booklet with Mr Mitchell’s face supposedly a booklet on immigration policy for which he said Mr. Mitchell the former Minister was responsible with the headline: No Chick Nor Child”.     This is yet again a homophobic slur.

Even the gay and lesbian community is silent.  What an interesting place we live in.

The Speaker himself doubled down and said to the press that he would do it again.  He seemed to put the onus on the PLP as to the way forward.  There is no such onus. The PLP need do nothing.  They have the moral high ground on this.

The Speaker must resign.  He must resign forthwith.  He has crossed the line.  He is unqualified to be Speaker.  He has no place in Parliament in fact.

What he did not only violated all judicial norms and Parliamentary practise but just showed what a nasty individual he is. He is a low life piece of dog do do.  He has now opened up a line of attack on himself, his wife and children. We hope he is prepared for it.

Halson Moultrie we are advised should know what a former cocaine user and abuser is.  This is maybe why he had the melt down that he did, pleading religion as a protection for what he said.

The Speaker has managed to alienate public servants, every person who is divorced, every Bahamian with a foreign wife.

The PLP has nothing further to explain. These are vile despicable people.