IN THE FIRST 48 FOR ANDRE AND RENWARD 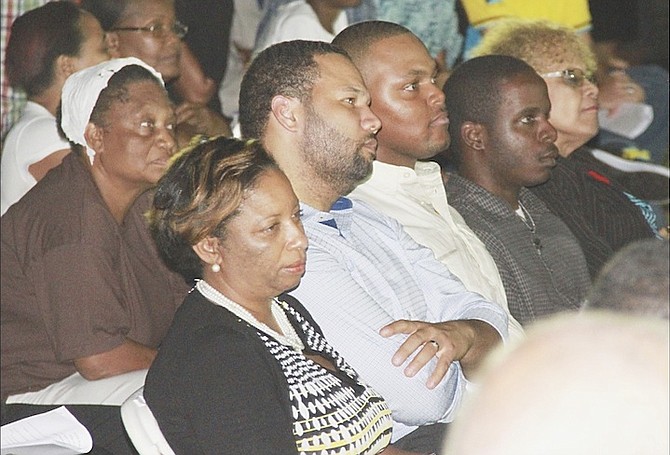 Looking like cats that swallowed the canary, or wet, tame sheep dogs, you take your pick, the newly minted FNM members showed up in the House of Assembly last week 11 November.  This is the start of a new era for Andre Rollins and Renward Wells.  Three parties in three years: a record. One for the Guinness book.  The bet is they will learn pretty quickly that you don’t just jump and shout out any nonsense you think when you are in a party.  You have to behave and conform to rules.

So we will see if the two of them can behave.  For the moment, it’s all smiles. The bet is that Andre Rollins will be the first one to engage in some unstudied and undisciplined outburst that will get him trouble with his new colleagues.  But let’s wait and see.

In the midst of all the smiling success of Dr. Minnis at snagging these two defectors from the PLP, one of his own members made him a tad bit uncomfortable last week when Phenton Neymour, the former Junior Minister for Works told the press that notwithstanding Mr. Wells becoming an FNM, he wanted to know the full story about the Letter of Intent where Mr. Wells signed it seeming to promise a foreign company a 650 million dollars waste to energy project in The Bahamas, on behalf of the Bahamas government.

It appears that Mr. Neymour must be in the other FNM faction and didn’t get the memo from the Leader that Mr. Wells is now pure as the driven snow.  So let’s not talk about that LOI anymore.

Mr. Wells had up to the point of his resignation said that he signed it on his own.  Turns out that is not quite what he is saying now.  Now he says he did it became someone who was leader in the PLP told him to but the problem is he can’t prove it because the direction was not given to him in writing, so he agreed to take the fall so to speak.  Clever Dick.  Too clever by half.

Mr. Neymour was having none of that.  He wanted to know the full story and wants the questions that the Leader of the Opposition has on the order paper of the House answered.  Us too.  We want to know. LOL.

The short answer to Mr. Neymour is now that you have Mr. Wells in your breast, you can invite him out to dinner one night and as your former leader would say: “Monkey can put question to he ma”.

Or alternatively he could ask Dr. Minnis the now leader of the FNM, since Dr. Minnis forced out of his silence by Mr. Neymour the next day said that he has the full story.  He says that he congratulated Mr. Wells for his leadership in owning up to signing the document. Too clever by half.

What was that we said last week? The FNM’s ratio is: he may be a son of a bitch but he’s our son of bitch.

Soo in the first forty eight, Andre Rollins and Renward Wells, late of the PLP are now FNM and are now Shadow Minister of National Security and of Youth respectively.  Great day in the morning.

As Andre Rollins sat and pondered in the House, as he followed Dr. Minnis in Freeport on Saturday 14 November, he was as meek as a lamb.  This must have been after all, what he wanted, just a little attention.  Someone who would take him seriously and make him a minister, even a shadow one.

As a gift to Dr. Minnis in the new job, he was on the job showing up at a crime symposium put on by the Anglican Church and making a press release asking the PLP to step up to the plate crime.

Yes we remember one FNM who became an FNM after the PLP did not nominate him.  He walked up to one of his former PLP colleagues and said: “you’ll couldn’t even offer me a Senator seat”.

Crossing the floor eh?  For a shadow minister’s post.  Life is cheap. Great day in the morning.