IT’S A BIRD! IT’S A PLANE! NO IT’S RANARD HENFIELD 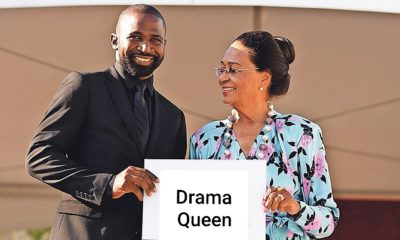 Senator Ranard Henfield who organized the fake march when the PLP was in power that was the cover for the FNM to take over the country is in big trouble.  He is being labelled a liar, prevaricator and at minimum someone who exaggerates for no reason.  In the middle of the scandals plaguing the FNM administration, perhaps he thought that his account of what happened at Little Caesars Pizza on Carmichael Road on 23rd November might bring him back into the limelight.  After all the FNM isn’t paying any attention to him and the country has forgotten him, thinking of him only as an opportunistic faker.

Senator Henfield has now disgraced the name Senator and the institution of the Senate.  He told a story that while he was getting a pizza on 23November, a slashing and burning session took place and he had to protect the customers from the band of wild young people that assaulted the place.

He is the only one that has that version of the facts.  The security tapes do not show it.  Eyewitness news took him part for it.  On line people called him out on it.  The result was that he was angry and called one of the people criticizing him a faggot.  That did not go over well with the gay community or people at large in the country.  There have been calls for his resignation.

We join that call.  Senator Hendfield came to office as a faker.  He has now disgraced the office by exposing the fact that he is a faker.  He comes off as a supercilious fool who is simply looking for public attention.  Even his own colleagues in the Senate were laughing at him, what with a song written about him.  People calling him a drama queen and on and on.

The FNM has been silent in the face of this disgraceful conduct on the part of one of its public figures.  The media while amused at it has not called for him to go.  We say again, he must go.  He has disgraced the Senate and his office as a Senator by a bold-faced lie to the public and his offensive language.