Klay Gets His Portrait 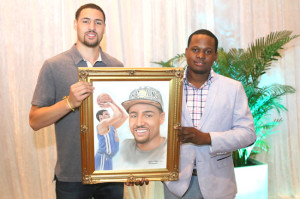 Nassau, here New Providence – At the recently honouring and welcoming of Bahamian basketball legend Michael Thompson and his son, prescription current NBA champion Klay Thompson, the Prime Minister of the Commonwealth of the Bahamas, Minister of Tourism Obie Wilchcombe, a variety of Bahamian executives, and spectators were present to see the unveiling of a custom portrait created by world renowned Bahamian artist Jamaal Rolle aka “The Celebrity Artist.”

At the reception, the unveiling of the portrait was introduced by the Prime Minister Perry G Christie who humorously said to Klay Thompson, “Boy I wish I look like you,” sparking laughter from Thompson and those gathered.

Minister of Tourism Obie Wilchcombe unveiled the portrait and the artists presented it hand in hand to Bahamian NBA champion Klay Thompson of the Golden State Warriors.

Klay Thompson said, “Wow, you did this? This is amazing.” Klay’s father Michael Thompson was so captured by the detail of the portrait he immediately went over to  the artist to commend him.

Later on Michael Thompson joked with Prime Minister Perry Christie saying, “How come I never got any portrait?”  Michael Thompson later referred to Rolle as a ‘Rembrandt’ and told him, “You are the LeBron James, Steph Curry of portrait artists that I have seen.”

The event ended with much smiles, laughter and chatter about the presentation and painting as numerous guests congratulated the athletes and the artist.