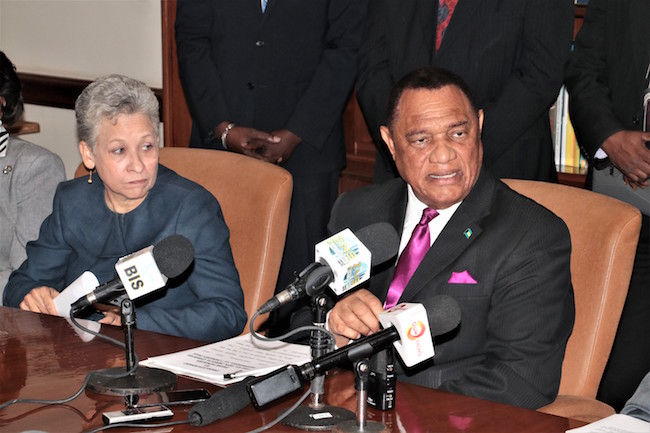 Prime Minister and Minister of Finance the Rt. Hon. Perry Christie announces landmark airspace agreement, as Minister of Transport of Aviation the Hon. Glenys Hanna Martin looks on, 11 January 2017, in a press conference at the Office of the Prime Minister. (BIS Photo/Eric Rose)

NASSAU, The Bahamas — Prime Minister and Minister of Finance the Rt. Hon. Perry Christie announced, on January 11, 2017, that the Government of The Bahamas has reached a “landmark and historic” agreement with the Federal Aviation Administration (FAA) of the United States of America, which will result in the exemption of Bahamian aircraft operators from payment of overflight fees to the FAA on flights which take off and land in The Bahamas.

“Under international laws and conventions, countries require airlines and other aircraft to pay a fee for the right to overfly their airspace. The administration of these rights has been performed by the United States Government via the Federal Aviation agency (FAA),” Prime Minister Christie said at a press conference at the Office of the Prime Minister.

Notwithstanding Bahamas Independence in 1973, Bahamasair, for example, and other carriers in The Bahamas have continued to pay the FAA for the right to fly within The Bahamas.

“The revenues earned to this point for all aircraft overflying The Bahamas airspace have been retained by the FAA.”

Prime Minister Christie said that the Government of The Bahamas could have continued to accept the foregoing arrangements with the FAA as has been the case in our history, but he pointed out that he was pleased to say that the Minister of Transport and Aviation the Hon. Glenys Hanna Martin — acting in the national interest — instituted discussions with “our friends and neighbour, the Government of the United States of America” toward securing meaningful internationally accepted arrangements for the management and control of the Bahamas airspace.

“It is of interest to note that Bahamasair in the last three years alone has paid overflight fees in excess of $1 million,” Prime Minster Christie noted.

He added that the exemption, which is expected to take effect in the very near future, will translate into significant savings for local aircraft operators, including Bahamasair.

“The effect of the exemption will also generally enhance the local aviation sector in The Bahamas,” Prime Minister Christie said.

Prime Minister Christie said that the achievement was an outcome of a series of negotiations between the US Government, represented by the FAA, and representatives of the Bahamian government, relating to the management and control of the upper levels of the Bahamas’ airspace.

Those discussions, he stated, began in earnest with the first round of talks held in Nassau in 2014, followed by several rounds in the United States, with the latest meeting taking place in Miami from December 15th to 16th of 2016.

“Considerable progress is now being made on proposed new arrangements for the management of our airspace, including plans to approach the International Civil Aviation Organization (ICAO) for formal recognition of an expanded Bahamian FIR (Flight Information Region), which would have economic benefit to The Bahamas and will be in the mutual interests of both countries, with respect to aviation safety and security,” Prime Minister Christie said.

He noted that although The Bahamas gained sovereignty over its geographical airspace when it gained Independence in 1973, the FAA has continued to manage and control this airspace as part of its Flight Information Region, under arrangements which predate the nation’s independence.

The FAA will be paid for providing air traffic management services during this period, he stated.

“The overflight fees will be set by the Bahamas Government and collected from transiting aircraft in accordance with the economic guidelines issued by International Civil Aviation Organization (ICAO),” Prime Minister Christie added. “It is also anticipated that the agreement will include technical assistance and training for The Bahamas, as it seeks to further develop its air traffic management capacity and enhance the aviation sector in general.”

Prime Minister Christie stated that, as indicated, an important aspect of those discussions was the steps currently underway by The Bahamas Government for the formal recognition by ICAO and neighbouring states of an expanded FIR largely corresponding to The Bahamas’ maritime borders. The FAA has indicated an intention to work together with The Bahamas in that important endeavour, he added.

Prime Minister Christie stated that The Bahamas had been represented in the talks by a “cross-section” of Bahamian professionals, comprising Sir Baltron Bethel, Senior Policy Advisor, Office of the Prime Minister; Charles Albury, Under Secretary, Ministry of Transport and Aviation; Loren Klein, Consultant, Office of the Attorney General and Ministry of Legal Affairs; Keith Major, Acting Director of Bahamas Civil Aviation Authority; Patrick Rolle, Consultant, Ministry of Transport and Aviation; assisted by Deepak Bhatnagar, Executive Director, Board of Directors, Bahamas Power and Light; and representatives from The Bahamas’ missions in Washington and Miami.

“The Ministerial efforts have been undertaken under the direction and guidance of the Hon. Glenys Hanna Martin, Minister of Transport and Aviation,” Prime Minister Christie said. “These developments represent a significant achievement and advancement in the affairs of the Bahamian people with respect to the management of its sovereign airspace, which heretofore had not been accomplished by previous administrations.”