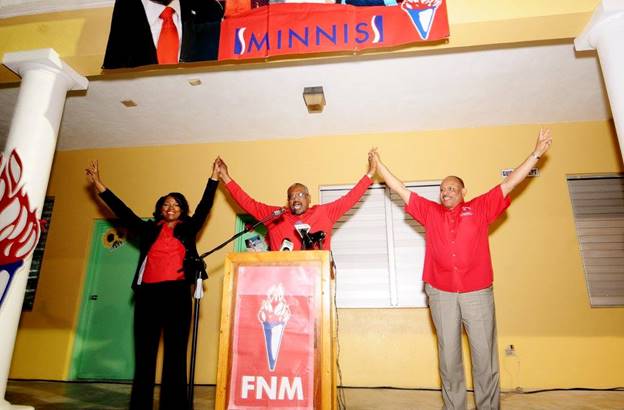 Cornelius Smith, the former school teacher, Human Resources Manager, MP, Minister and Diplomat, (known to his friends as C.A.) did a good job in all of those posts. In the last one as a diplomat, he excelled and was well regarded by his peers. The incoming Minister Fred Mitchell indicated that had it not been for his political affiliation, he could easily have fit into the professional diplomatic corps and continued in a diplomatic role. He is hankering for that life again and as the election time draws near, he has reportedly decided that he will support Dr. Hubert Minnis for Leader off the FNM because it looks like Dr. Minnis will be the winner of the FNM contest and he hopes that maybe just maybe, he will become Prime Minster and then back to the diplomatic world he (Mr. Smith) will go.

He may have company. It appears that Hubert Ingraham, the former Prime Minister, may have finally gotten the message that he cannot displace Dr. Minnis and is seeking out an international role for himself by running off to country after country to watch over elections. Dr. Minnis may be a good man for him to know.

An unusual photo showed up on the web last week, Ken Russell going back to his roots. No more blue plate, air conditioning. He was there in an old beat up truck and mashed up hat, seeking out a nomination. He had a bad falling out with the least Prime Minister Hubert Ingraham just before the general election and lost his nomination and sat on his hands during the last contest. Now he too is speaking to someone who has great influence on Dr. Hubert Minnis and seems to think that Dr. Minnis will be the winner and so is hoping that just maybe he can get a nomination for the West Grand Bahama and Bimini constituency in the next election, and maybe just maybe he will be back to where he left off.

They are lining up. Dr. Minnis is bringing in the sheaves.

Tennyson Wells helped him out quite a bit during the last week. In the FNM, there is a fault line. That fault line is where the two bits were welded together back in 1972 when they joined forces to fight the general election. The rump of the old United Bahamian Party (UBP) with the Bay Street boys and the White oligarchy that ran the country prior to 1967 welded to the breakaways from the PLP who called themselves then the Free PLP. They split along that fault line in 1977 when Cecil Wallace Whitfield led them into the general election and ended up in disaster as two forces, with Kendal Isaacs heading the other side. It threatens again with Richard Lightbourn, the White MP, being accused of being a racist (his words not ours) in the FNM Council. Tennyson Wells made the charge as well; he who left and went with Cecil Wallace Whitfield when they had enough of the UBP in 1977.

Dr. Minnis is chugging along. He went into the East and presented his candidates for the area. He even had Dr. Duane Sands, the enigmatic front line doctor politician, singing the Hubert Minnis song at the meeting. What a time it was. The ducks seem to be lining up. The dominoes seem to be falling in a row. Loretta Butler Turner, who was in the press, last week to say that she slapped Andre Rollins because he was abusing her is losing her support in the party and is trying to recalibrate her rhetoric before she is left without any alternative but to beg pardon of the PLP and get a nomination from them.

For now, Andre Rollins according to Dr. Minnis will be back in Ft. Charlotte. How he plans to face those people that he has treated with contempt for four years, we will never know but politics is strange. Renward Wells is to go back in Bamboo Town. It is not certain whether there will be a Bamboo Town when the dust settles. Michael Foulkes is to go up against Shane Gibson in Golden Gates and Kenyatta Gibson is to go up against Michael Halkitis in Golden Isles.

Dr. Minnis plans to put himself on the Constituencies Commission to help draw the boundaries. He has promised that he will help to wield a mean knife.

So if you were Hubert Minnis, you would know, that well thing aren’t quite where they should be but things are trending in the right direction.

We urge him to stay the course.