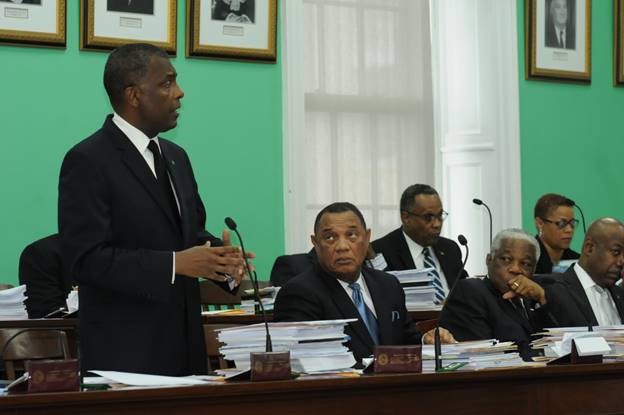 I wish to update the House on matters arising concerning immigration since we last met and are of national interest.
The House may recall that there was an allegation of abuse made by two representatives of The Bahamas Crisis Centre about Jamaican women arrested by the police and detained.
Those untested allegations, without hearing the other side, were published abroad including in Jamaica. As a result of an inquiry by the Jamaican Foreign Minister Senator A. J. Nicholson, I spoke to the Minister of National Security on Thursday 10th December. I then reported to the Jamaican Foreign Minister that I was not au fait with the facts but undertook a review of the matter.

I have since spoken with the Commissioner of Police, and the head of section in The Bahamas Ministry of Foreign Affairs that deals with Human Rights issues is continuing his review of the matter and will in due course make known to the government our findings.

Mr. Speaker on this matter I end by saying that we respect the Vienna Convention and the representatives of foreign governments in this country. The Government does not condone abuse of any kind of detainees. It is always important however to hear the other side.

I wish to report the following

Three Bahamian men along with 15 Chinese nationals were arrested at Bimini last Wednesday, 9th December after they were found by Police on a vessel which they suspected was heading to Florida. They were brought to Nassau and the Bahamian men were charged with assisting in illegal departure. They were granted bail in the sum of $5,000.00 each with one surety. The case was adjourned until 7th March, 2016 and transferred to Bimini for trial.

The 15 Chinese are scheduled to depart Nassau today 14th December, 2015 for Cuba and then travel on to China.

Secondly, 30 Cuban nationals (male) were landed at Grand Bahama late last evening by the US Coast Guard. They were picked up off Cay Sal. They are to be transferred to Nassau today.

Thirdly, a pilot on the way to Exuma spotted what appears to be a Haitian vessel with migrants on board on the eastern side of Long Island. The Defence Force was notified and is sending a vessel to investigate.

Mr. Speaker, this is being done to demonstrate to this country the seriousness of the problem that we face with regard to illegal migration. It is a relentless fight.

Flogging As A Penalty
Recently, the press has been creating a fuss over comments made by a prominent Q C. about flogging illegal migrants. It seems to me that this is a story which has taken on a life of its own, largely created by the press to sell newspapers. Having created the story, they then demand that the Government denounce the individual for what he said because that individual is a member of the Progressive Liberal Party.

Let me tell the public what the law is on this matter. Flogging is not a penalty that court of The Bahamas can impose on illegal migrants in this country. That is the end of that. There is no proposal to make it a penalty.

The lawyer in question is a private citizen and is free to say what his views are. That is not the position of the Government and it is wicked to try to conflate the two.

I remind the country, however, that flogging is a penalty in the statue laws of The Bahamas. It is something that I opposed and fought against. I do not support it. It was removed in 1984 and returned in 1991 and has been pronounced to be constitutional by the Privy Council.

If you read the list of offences, however, for which flogging can be imposed, nowhere does it say such a penalty can be imposed for illegal migration.
Civil society is free to condemn who they wish for their views if they wish.

The Government enforces the law as it is.

Mr. Speaker, I take issue with characterization. The exposition in this House last week were the simple unvarnished facts.
The only thing that is shockingly callous is the inability of that organization to back away from the treachery, falsehoods, exaggerations, slander, libel, with no apology and they are simply trying to be clever by seeking to change the subject. No amount of obfuscation can change the fact that what was said by their spokesman with regard to the case of Mathew Swell was untrue and false. That is the only fact in issue at this time.

Another of their activist, after using an expletive to describe me, then predicted that the man repatriated to his home country Jean Justillien will be back.

Mr. Speaker this is precisely what I have been saying: are these people working to undermine the laws of The Bahamas.
I wish only to say that the man who was repatriated to his home country has been placed on the restricted list.