Mitchell Answers Fred Smith, Hubert Chipman and The No Vote 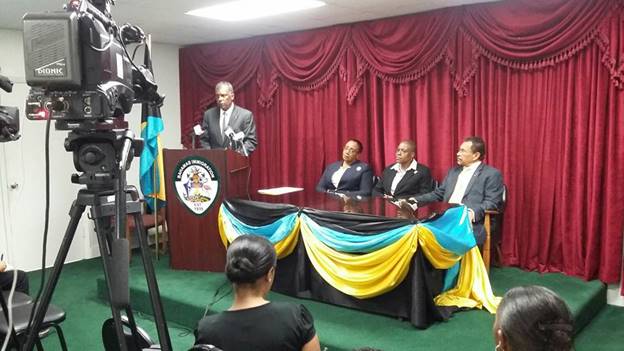 I would wish to respond to the comments of the Opposition spokesman on Immigration Hubert Chipman, reported in The Tribune yesterday, in which he used the word hypocrite to describe my intervention to caution Bahamians about allowing racism and jingoism to seep into their disagreements with the policies on Baha Mar.

It is simply unfortunate that Mr. Chipman could not resist the temptation to be politically divisive and stand up against racism, clearly and unequivocally.

That was the only point of my intervention.

We both have a responsibility as public spokesmen to stand up against jingoism and racism.

If he chooses not to do that, that is his business but I do.

His criticisms of me are completely misdirected and untrue.

What I have always said and I say again, is that when it comes to the border of The Bahamas, that border is inviolate. We must all stand together to protect The Bahamas the place where we want to live. That is not jingoism that is reality. The FNM must stand up for The Bahamas and Mr. Chipman must as well. If he does not then he fails in his public duty.

Similarly, I respond to Fred Smith QC who has again libeled me and libeled the officers of the Department of Immigration in statements published in The Tribune of yesterday.

He simply has no sense of balance. He wants the country to be overrun with illegal migrants.

Mr. Smith’s assertions in the press with regard to the immigration policies of the government are wrong in law, and his objections are silly.

It appears that what we have here is anything for publicity. Fred Smith, the publicity hound.

There is nothing being done by this Minister, the officers of Immigration or the Government that is illegal or unconstitutional. Those are figments of his vivid imagination. He is again accusing the government of ethnic cleansing. He is being stupid and engaging in typical overreach.

He owes this country an apology for his conduct and disgraceful language.

Finally, I am appealing to the constituents of Fox Hill to vote yes to all four questions in the referendum on Tuesday 7 June. I shall be voting yes and as the leader of the constituency, I assert that voting yes will be in the best interests of the men and women of The Bahamas and our country.

This is a simple matter. The Government is proposing with the agreement of the Opposition to make men and women equal before the law. If this passes, whatever men have in the constitution today, women will have and vice versa. That is all it is.

Fox Hillians should not be fooled by people who do not want men and women to have equal rights who are making up false stories to frighten you into voting against your own interests.

If this vote fails, it will not be the government who loses, but the future generations of Bahamians.

Let’s make sure that does not happen.