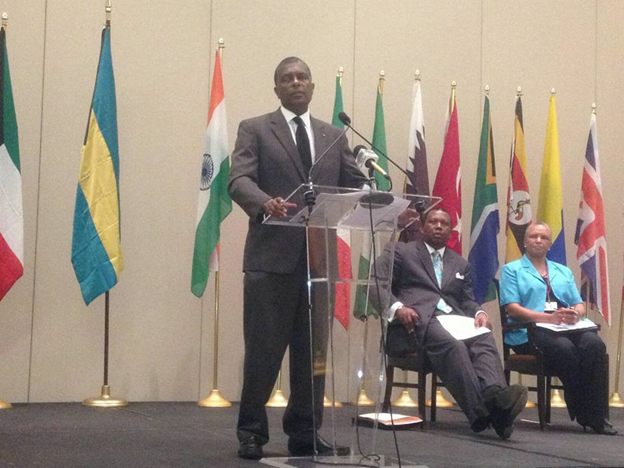 viagra times;”> The Foreign Minister Fred Mitchell spoke at the opening of dip week in The Bahamas on Thursday 22 October. He said the following:

Let me first add words of welcome to The Bahamas and this second annual convocation of diplomats to The Bahamas for what we call Diplomatic Week. I am pleased that so many delegations accepted our invitation to join us for the next few days. I hope that you find the visit both illuminating and instructive.

I hope you find some time to explore the charms of Nassau and that one day you will come back for a more relaxed visit.

Later today our Minister of Transport will be joining us for lunch. The Prime Minister will join us tomorrow for lunch and the week’s activities will end with the reception by the Governor General on Friday evening.

On Tuesday 20th October the Permanent Secretary of the Ministry gave an excellent talk on The Bahamas and its diplomacy. I would like to extract from that talk this excerpt which I think is a fitting starting point for my brief statement this morning.

She said the following under the rubric:

The Diplomacy of Small States
So what does this mean for a small country like The Bahamas?

Studies suggest that in an effort to overcome the vulnerabilities faced by small states (lack of overt economic and military power, susceptibility to external forces etc.), small states compensate for their lack of power by seeking to promote their interests in international institutions and emphasizing the soft power inherent in international legality.

This exercise of power is possible because modern diplomacy has created a situation whereby international legality can hold its own against, and in theory is more legitimate than, economic and military power. Thus, the Bahamian Foreign Service officer can sit at the negotiating table representing the country’s policies with the same rights as his/her big country counterparts. That isn’t to say that economic and military might does not influence the state of global affairs – but they are not the sole determinants.

I say that sums up quite fairly and adequately how we look at things in The Bahamas. There is a world order and there are rich and powerful countries but what keeps the world in order is the acceptance of the rule of law and that both the small and the large have a role to play in international affairs.

It is against that background that we are asking the support of your countries for our effort to become the first English speaking Caribbean nation and small island developing state from Caricom to sit on the United Nations Human Rights Council. There is the Latin American and Caribbean group but no one from the Caribbean group has ever sat on the Council. We think it is time.

We think more importantly that we have something to contribute and amongst other things we believe that the world’s interest in migration at the moment is a subject to which The Bahamas can contribute. We experience thousands of economic migrants coming to our shores without leave every year and it is important from the Caribbean perspective on these issues to find their way into this world forum.

In addition, we think that notwithstanding some areas that need to be addressed, the record of The Bahamas is a good one on human rights. Indeed with regard to a recent matter in our own courts and which you may read in our newspapers I said the following yesterday to the parliament:
The one thing that I would like to say as a general point is that notwithstanding any lapses or errors that may be made or may have been made in our systems, the Government of The Bahamas does not condone discrimination, inhumane treatment, assaults on detainees or abuse of any kind. There are systems in place as we have seen to deal with matters which require redress. They may need some tweaking to be more efficient but they exist.

As we have seen in the most recently publicized case, the system works.

I would also urge legal counsel who run into these issues which I think are largely lapses of an administrative, that they can freely call my office directly if there is as specific case that needs to be addressed.

I will be speaking with the prison officials to see if any complaint was ever made of the kind of abuse that has been reported in the Jamaican press during the incarceration of the individual who is now complaining. We must try to get at the facts.

I do not by making that statement want to appear to be excusing any behavior by officialdom which is unacceptable. My point is that we must know the facts. I have been around long enough to know that you ought to hear the other side. When the other side of a story is told, you may be surprised at what you will find.

The Prime Minister will speak to the other themes that are of some importance to us. We are of course also seeking your support for us to return to the Council of the International Maritime Organization.

We continue to speak up for the viability of our financial services sector.

We want to develop our young people and provide them with opportunities to live and work at home and abroad.

We are a concerned about climate change and the environment. We look forward to some binding commitments in Paris. We hope that the funding will be available to states like ours that our vulnerable and the fact of our GDP per capita is not used to our detriment.

We are continuing to assert that in UN peacekeeping the status quo with regard to payments should continue to obtain and that the present discount for us a small state should not be removed.

During the course of the day, you will get a good feel for these and other subjects of interest.
We continue our outreach to the Gulf States and to the Far East and China even as we maintain good relations with our main trading partners the United States of America, Canada and Europe, Latin America and the Caribbean.

It remains for me to wish you a good and productive morning and afternoon.

Please let me know if there is anything we can do to make you more comfortable.

I hope this is a productive trip.

We are glad you’re here.