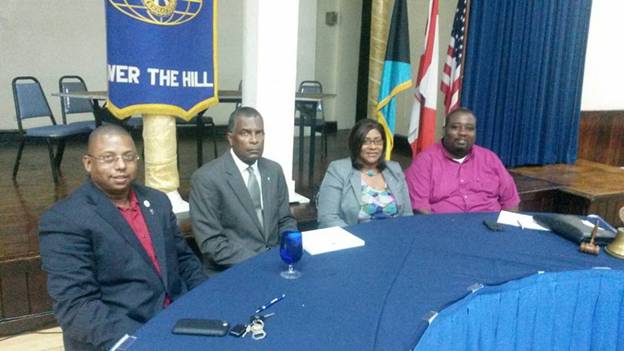 Fred Mitchell, online Minister for Immigration spoke at Kiwanis Over The Hill on Thursday 27th August and responded  to Fred Smith Q C who continues to defame the Immigration Department.  He claimed that the world is watching and that Mr. Mitchell ought to be careful. The response is below from the speech at Kiwanis:

see times;”> The second issue I wish to address is the immigration policies of the government.

These were announced almost fifteen months ago and came into force on 1st November.

The Government has passed an amendment to the immigration act to create a Belonger’s Permit for that category of person who was born in The Bahamas to non-national parents here lawfully and for the  children of those who obtained their citizenship by virtue of Article 3(2) of the constitution.

Recently the Grand Bahama Human Rights Association has been in the press with long statements vilifying me personally and seeking to discredit the polices of the government.

Suffice it to say, their criticisms are of no effect. No action that they have taken has changed the policy one iota or the law.  All must conform with the law.

I explained to someone today at a school. The Minister of Education has said that there will be provisional entry into the schools for ninety days to allow people to get their paper work in order.

The question of who enters the schools is the decision of the Minister of Education.

The law is that everyone in The Bahamas who is not a Bahamian must have the passport of their nationality and a permit to reside or a work permit or a Belonger’s Permit or Permanent Residence.  Applying for citizenship does not protect you from this requirement.

It is being enforced universally.

Most people are complying with the law.  The enforcement division of Immigration is working well and the number of complaints has been minimal.

Meanwhile the gravy train of illegal migrants continues give protective cover by some of these same organizations who claim that they want to protect migrants.  These  local organizations have to be careful that they are simply not a cover for illegal operations and are defaming the country’s immigration officers and the people who carry out the policy.

The Grand Bahama Human Rights Association has been so extreme and unbalanced and untruthful in their commentary that they lack credibility in the eyes of the public.

I want to thank the public for their support and I thank you for this opportunity this evening.