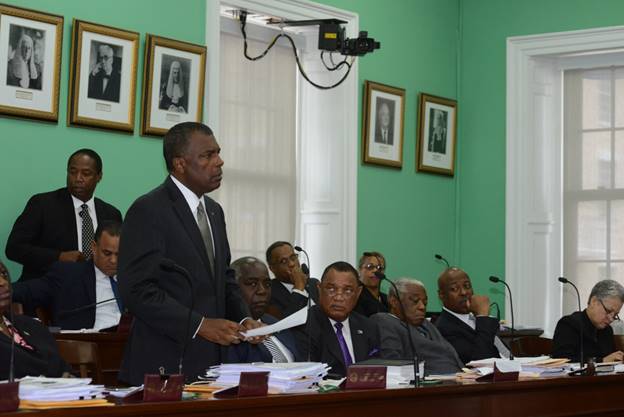 I rise on a point of privilege.

Yesterday the Government issued the following statement in response to a decision by the Supreme Court on a matter involving Parliamentary Privilege:

“The Judgment delivered today in the matter of parliamentary privilege and involving the Minister of Foreign Affairs and the Minister of Education is being carefully studied by the Government. The Government awaits formal advice on the effect of the Judgment, but preliminarily is of the view that any finding that there was a breach of the constitutional rights of anyone in this matter is a decision which is wrong on the facts and the law.

“The learned Judges decision will be promptly appealed.

“At the request of the Attorney General, a stay of the entire decision was granted by the Court so the status quo remains pending the hearing and determination of the appeal.

The decision in this case is in view a serious blow to the parliament and its work. It must not be allowed to stand. The rights for our constituents to have members of this parliament who can speak freely in this place must be defended.

There are wider issues at stake than whether or not the MP for Fox Hill or the MP for Marathon personally can speak freely. This decision threatens to set aside a history of free speech in this Parliament that dates back to 1729. Up to now the law has been clear.

It is therefore incumbent that the matter be prosecuted through to the Privy Council with dispatch.

The public should be reminded that this matter was brought by representatives of the people, not the Government, who discovered and alleged that 8 million dollars passed through accounts of the law firm of Callenders and Co to be used through an organization called Save the Bays, funded by non-nationals, with the explicit intent of destabilizing the government of The Bahamas. That is widely disseminated in the public domain.

Any Member of Parliament with that information had a duty to bring that case here and to present that case. That duty was discharged.

No one in their wildest imagination would have thought that a Judge of the Supreme Court would grant an order to restrain MPs from speaking in Parliament to defend this nation. It is simply remarkable.

The Bahamian people should be outraged at this ruling because it would suggest that their Parliamentary representatives must now be sitting on pins and needles, seeking to divine what they can and cannot say, when the law up to now has been clear that free speech was possible in this Parliament.

The Committee on Privileges will need to do its work with regard to what is behind this matter as alleged when the matter first came to parliament. That is what The Q C who brought his matter in the Courts will have to answer.

It is the larger issue of free speech that has to be defended.

The irony is that the beneficiaries of this ruling are the same people who argue that the Government needs a freedom of information act but well paid as they are by foreign people go to court to restrain the freedom of speech and right to information of Members of Parliament, and in this ruling they have succeeded so far.

As for myself, Mr. Speaker, I assert which I have always asserted; any purported order to restrain me from speaking freely will be ignored. It has nothing whatever to do with me.

I wish to say that I support the work of the member for Marathon in this regard and I trust that he will see this trouble to the end as I intend to do.